This is not fair Devs! LOL

WTF DUDES? You guys are not allowed to play in public!!! LOL I’m just kidding, it was fun. 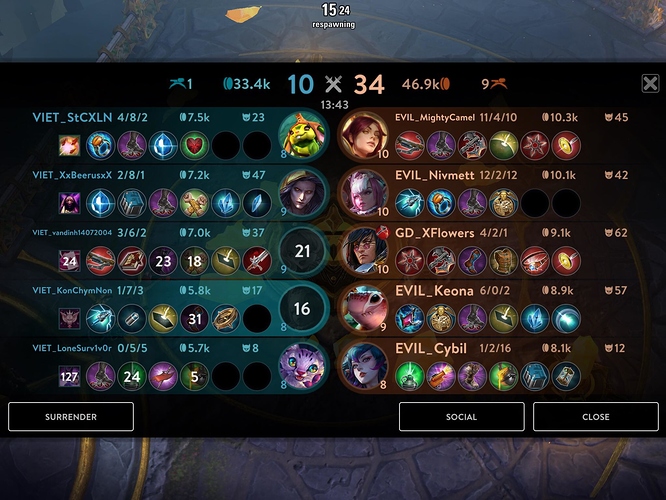 Oh, just realized you played Malene as well… who killed you the most?

everyone! lol Malene is difficult!

Yeah she seems OP but I suspect she takes time to take advantage of all of those abilites.

Watched TT YouTube yesterday and he was murdering people with her.

Well he is a Dev do they really have to pay for stuff in the game?

Of course playing Malene is hard… with THAT build.

Skyeward has a pretty chill stream on Twitch, too, and is very kind. I once hit her up post-match to say thanks for the game and was greeted by kindness. SEMC devs are a nice bunch.

They don’t have all talents unlocked…

I know your comment is half in jest, but I think some people are rather unfair about the devs. Especially the less populations. I’ve played games with devs and literally never had a problem - in part because I usually don’t try to force them into stuff.

One game I found MightyCamel soloqueing while in a high elo party, and he did fine - my party mates were hella toxic because he couldn’t save us 3v5 while my party mates were elsewhere doing god knows what. Frankly, I was surprised he didn’t start trolling because of how lousy and toxic my party mates were being - my attempts to salvage the situation would never be enough. They did nothing to help, he tried.

I’m sure there is a good sized grain of truth to the Dev toxicity thing, but I think a lot of it is entirely undeserved - I’ve never been toxic to them and they have always returned the favor. People act the same way about celebrities a lot of the time. -_-

Yeah I was joking. I get devs are humans, everyone has bad hair days.