The Tea is burning. Games that are in risk of being banned in China

AoV and LoL is on there…

Evil cackling in the background thats totally not RiseChu 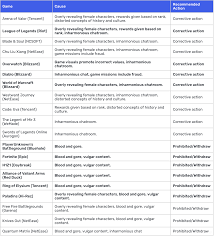 Tencent has a good relationship with the Chinese government, which is probably a factor in why most of their games are still available there.
Netease (who will be distributing Vainglory in China) won’t have this advantage.

This mildly concerns me. China is demographically enormous, gaming is pretty damn big there, and the Chinese middle class is seeing rapid growth on an annual basis. At this point, they are a market that can no longer be ignored by any serious gaming company that wants their products to have a concrete global presence.

And companies have and always will place profit and the continuation of the company above everything else. If SEMC’s financial situation is indeed as bad as many people on the subreddit and Discord say it is, I wouldn’t put it past them to start throwing the game at China in an effort to keep the game and their company afloat even if it meant changing Vainglory on a fundamental level to satisfy a Chinese audience.

However, catering to China has consequences. I site three examples from memory:

PUBG did it, which resulted in the game being hit with a massive influx of Chinese hackers.

Conan Exiles let Chinese players into the game a while ago. Massive cheating followed.

Mobile Legends, while developed by a Chinese firm, was forced to alter the aesthetic appearance of certain hero skins because they offended Chinese society’s extremely conservative cultural standards on visual depictions of women, violence, ect.

There’s good reason to be extremely wary of the game being forwarded to China imho.

Those chinese hackers better find a way to get unlimited rArE hAt mAtErIalS chests for the ultimate Vainglory™ MOBA Perfected for Touch ™ experience!

Vainglory the Moba perfected for nothing™*

In before VG get axed for Fortress/taka blood gushing animation

Does scandalous female artwork and some blood/gore effects make a game great or not? If you’re answer to that question is yes, then in my opinion you’re missing the point. It’s a simple business decision. Alter some artwork to capitalize on a large and viable market, or don’t.

For me, if you took some of VG’s skins away and altered a few in-game effects, I would have zero issue with that if it meant a healthier future for the game. I play VG due to it being a great MOBA and free to play. I wouldn’t care if they only had default skins. (Although even some of those, such as Rona, would likely have to be altered).

To me, actual gameplay will always take priority over artwork/graphics.

Does scandalous female artwork and some blood/gore effects make a game great or not? If you’re answer to that question is yes, then in my opinion you’re missing the point. It’s a simple business decision. Alter some artwork to capitalize on a large and viable market, or don’t.

Well, if that’s a thing, just do that!

Yep, it can be as simple as having a separate build (with different artwork/models) for that market.

Does scandalous female artwork and some blood/gore effects make a game great or not?

Not exactly, but if I purchase a skin, I paid for that particular skin’s overall aesthetic. If this were to be changed because of a distant nation’s differing cultural mores, the altered skin is no longer what I initially paid for. I’d demand a full refund. If they added NEW skins that were principally designed to cater to a Chinese audience, I would not have an issue with this.

I think making the game with different choices better , like I would choose the Chinese version of vg if they release it instead of the current one , just make it switching like joystick and touch , and the Chinese could make it permanent for their players while the rest of the world can switch between them .

Like I don’t mind revealing skins here and there but most games releasing too much of them , but I don’t know if giving the people the option going to make the marketing team confused .