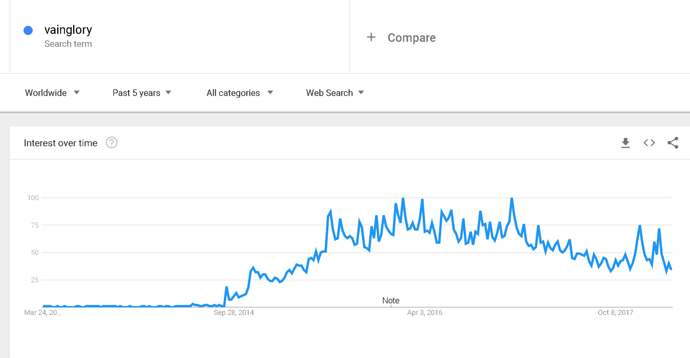 Vainglory is back to it’s lowest since ~2015.
Interestingly, even the 5v5 hype didn’t get as much attention as Vainglory did around 2016.

Who uses Google trends? I know of it because of you mentioning it every other day…

Playoff beard left?? Omg… why?? I don’t understand? They fire him or he judt willingy leave?

No need to be a marketing genius to understand that VG isn’t exactly in its best shape either.

That also includes searching for the actual word itself 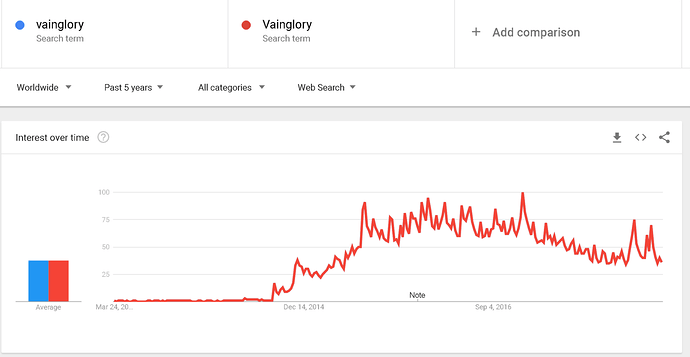 Does it include talking out of your ass?

He said he left bc he needed a more consistent job for his family, as well as a better work/life balance. We had a discussion here about it when it happened if you want to see.

Does it include talking out of your ass?

Talking out my ass you did a trends comparison on two of the same terms that will give the exact result without doing any search on a topic. While I am happy of the effort you are going through, no matter how little it is, if you go by topic vainglory(video game) is slightly above vainglory(topic). What this shows is while vainglory the game generated hype it did not generate sticking power for builds. While the band vainglory is a complete flatline

Playoff beard left?? Omg… why?? I don’t understand? They fire him or he judt willingy leave?

Godseye and Vainshame also left. Not sure if they left for their own reasons or if they were booted by SEMC.

Actually it doesn’t as those searching for just the game are higher than the term which icudes quotes, words definitions, specifics about the game. To prove your point they would need to be exactly the same yet they aren’t

Note that searching for the topic Vainglory (video game) also accounts for related terms and spelling mistakes, so this is the most accurate.

"Note:
This comparison contains both Search terms and Topics, which are measured differently. "

Also what are the odds of two curves being so similar in their numbers and evolution? It’s obvious that Vainglory(topic) = Vainglory(term).

IMHO if SEMC can get 5v5 right, it will begin to pick up popularity with people who play other 5v5 MOBAs via a computer and that will in-turn launch it into the future with promise and purpose. If they don’t make 5v5 engaging and popular, it will die for sure. As of right now, the major issues i see are:

Hire a ‘real’ game balancing team instead of whoever is doing it now… I recently heard a dev on a stream say that they balance by looking at who’s picked the most and taking the lower ranking heroes and buffing them until they become popular. How pathetic is that? The issue is not that simple.

Im from singapore, but atm I work in Indonesia

Tony’s taunt is a new mechanic and it is very very powerful!

For the point of your 6s getting hot in 5vs5, I can second that for my s7 edge. Not only it’s getting hot faster, that mode drains the battery a lot faster compared to 3vs3. Both shows clearly that 5vs5 is using a lot more processing power compared to VG before.

Joke aside, the phone is heating a little, but before was cold for more that 1h of gameplay.

As for the note 7 bang bang edition, yeap… you can really pull on it explosive team fights.