At the end of summer season, when we got our rewards, the BP chests all gave me the same rewards ie koshka L skin or already owned rare skins. And now ive opened 4 gold chests from the seasonal BP rewards and 3 of them gave L alpha and one only essence and opals. And almost all of the 10+ bp chests gave kyoudo kestrel/ elite saw. Its too much of a coincidence to get the same skin repeatedly from the chests. But when i buy the bp chests with ice, they give me different skins. But the seasonal chests keep giving repetitive rewards. What did you guys get from the seasonal BP rewards? I really feel theres nothing “random” about the seasonal chests. I m sure everyone has seen how many silver/rare chests you get from games but no keys. SEMC sold the keys only for ice sometime back and not the chests. The claim keys and chests have the same probability of dropping but they knew the keys drop lesser. I m tired of all this money making tactics. Its annoying as hell to get the same things again and again. The only reason i still play and like this game is to collect all the skins. But for the last few months, i havent unlocked a single decent skin cos theres no way of getting it other than ice. Even the events are trash.
Next, the amazing, earth shaking, ground breaking, mind blowing, devoid of all logic, materials chests-
So here are the prices for the chests-
rare- 199 ice / 150 opals. So conversion, 1 opal = 1.33 ice
epic- 399 ice/ 300 opals. So conversion, 1 opal = 1.33 ice
Leg-499 ice/ 500 opals. So conversion, 1 opal = 1 ice
God knows what logic they used to price the leg chest. What on earth is this conversion logic even.
Next lets compare the skins SE skins. An SE skin that cos 2599 ice is worth 500 opals.
So for skins the conversion, 1 opal = 5.2 ice, which has been the conversion for a long time. Even the 199 ice rare chests, when sold for opals for the golden ticket, were 50 opals, which had a conversion of 1 opal = 4 ice, which is acceptable. But now there are these useless material chests which cost too many opals. I have never seen a game with different currency conversion for different things. I left COC for VG and guess what? I m playing COC again and its way more worth my time than VG is, cos i know that if i play more, atleast ill progress more in the game. In COC, theres an even gems to elixir/gold/dark elixir conversion rate for everything.
This much variance in opals and ice for different things doesnt make any sense.
Opals are supposed to be the premium currency which cant be bought. But now, they have almost the same value as ice. The logic of the game is flawed disgustingly in the market segment itself. Forget about the in game lol. This is basic math that a 9 year old can do. And they cant get this itself right.
Even the “Dont wait for end of season rewards. we’ll give them to you in the season itself” crap, I am one of those scums who’ll check every nook and corner of the free things i can get and Ive realised that the amount of rewards have actually decreased drastically. (I m not even gonna consider the trashy materials chests). They have done things wrong in too many ways. This game now feels like one of those anime/shows that starts off with a brilliant plot but then becomes boring and has a bad ending.
This game at the max, has a year left. Only a miracle can keep the game alive.

Yeah I feel that the material chests are just too expensive and not worth it even if you are missing just one piece for a hat there’s no guarantee that you will get it. It would be easier and more safe to save up your opals for a SE skin OF YOUR CHOICE. This also brings into question of what are we supposed to do with the excessive trash tier materials which by the time you have enough mats for a hat or two you wouldn’t have to worry about any mats other than the legendaries to get one of each hat.

Yeah, i bought one chest for 500 opals and realised later what a big mistake i had made.

well, i have 1600+ opals atm, but there is no se skin i really want to have. i already have a t3 skin for all the se skins i am missing and semc isnt really adding new se skins one would like to buy.
and even if they do, i would have to wait an entire update before i could get it.
i think the only chance for vg atm would be a new company buying the game up and cleaning it from all the mess , even if that means you have to give some cash back to players.

alised that the amount of rewards have actually decreased drastically. (I m not even gonna consider the trashy materials chests

It’s not basic math stuff, it’s a rip off intentional decision so you can spend your opals on 1-2 material chests that can not lead to even a single hat. Instead you can spend that opals towards two SE skins that should be good quality (like the new idris + low them locking it only for ICE when the opals are really premium currency that does not feel like such at all).

well, i have 1600+ opals atm, but there is no se skin i really want to have. i already have a t3 skin for all the se skins i am missing and semc isnt really adding new se skins one would like to buy.
and even if they do, i would have to wait an entire update before i could get it.
i think the only chance for vg atm would be a new company buying the game up and cleaning it from all the mess , even if that means you have to give some cash back to players.

I m sure everyone has seen how many silver/rare chests you get from games but no keys. 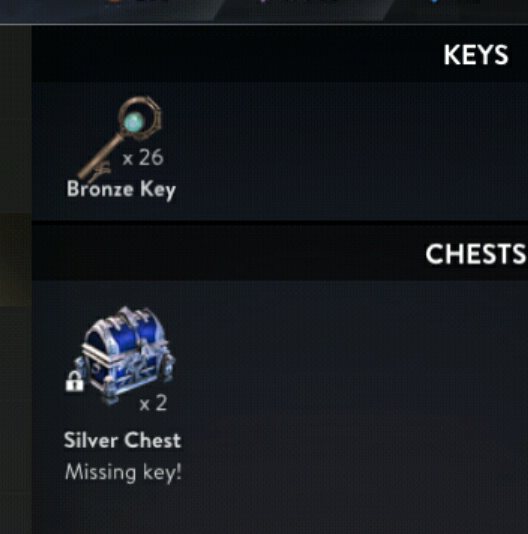 How? I got 50 bronze chests… tho their awards are pretty useless anyway, I will get most likely duplicate skin or two + little bit of glory/essence from them all.

I remember seeing someone who opened a bunch of bp chests and got the same 4 blueprints/skins on a constant loop.
Let’s say this person got Kensei rare, then Churn rare, then Kestrel Epic and Petal rare, after that, the loop repeated in the same order.

wow lol. Meanwhile i have 86 rare chests . And 53 silver chests and no keys. But i have like 8 gold keys

Yeah exactly what i am talking about. I keep getting the same rare bps as well. I am not sure about the order but i m pretty sure i got elite force saw like 3 times and kyoudo kestrel 4-5 times.

A long long time ago I played COC before farming died then I quit and found vg. Back then, Vg business model was a safe haven to the abused f2p players. VG isn’t that bad, but it definitely losing quality.

I am sure that one is not random at all. It can easily be calculated and even 3 of the same is a super slim chance, not to talk about some of the extreme cases that are 100% not random.

The last time I got anything good from rare chests was when I used my keys on Tony. After I didn’t get anything from the Kensei update, I just started collecting them, since I know that I’m not getting anything worth my time when I have 130 skins.

If you feel RNG in this game is very odd, I don’t blame you.

A Silver Chest too…

Like, how the heck? That probability of such a combination of 4 exact drops is mind boggling.

I think it’s 100% they using it , making it a true random give high chance of getting good stuff while they wanted them controlled , it’s like when I ask people to buy my product and probably get a gift , iPhone or laptop or a car , so people going to start buying my products and check the paper inside the product tells them (hard luck try again) , while in reality I didn’t put any gifts in the current products or maybe just the iPhone , so everyone buying my products actually looking for the car , and it’s the bait .