The Longest Match I've Ever Played 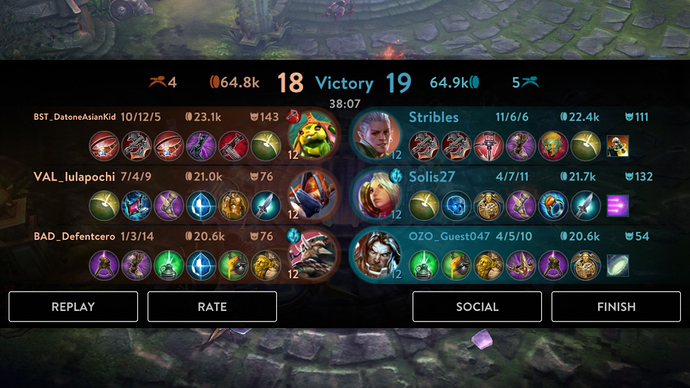 I don’t have any record of it, but I once played a 3v3 that clocked in at around 47 or something close.

i remember a post that clocked up 57 minutes in a 3v3. the guy was pretty pissed off.

I played one that lasted about 45 mins.
Funny thing is I was koshka. I was doing almost negligible damage by that point, so I swapped one offensive item for an echo, and somehow we won

Wow that shows a great matchmaking there plus both sides going hard.

And that is the kind of matches I like, no those one sided

Problem is too many complain about a match that long

Because most play mobile games on the go. When they are at home they will turn on the PC and play some games or full exp mobas. Waiting 10-20m for match start, then 30m+ long games will never be healthy. After all, we(the hardcores) are a small portion of the player base…

There are a lot of reasons why AOV is doing great while VG not so much. Tencent can pretty much make a hardcore MOBA for mobile, but they choosed to go for what is “best” for the mobile, i.e. huge player base, i.e. money. Sad, but why most will want to sit at their homes to wait 20m to play on their phones instead of firing up the PC and play lol, dota 2 and so on withour waiting?

Once had a ranked match that ended at 59 minutes. We ended up winning thx to a backdoor while they took kraken but that game was hell.

What tier are you? At top end of tier 9 I wait five minutes minimum and that’s assuming it’s not dodged… I can and often do wait half an hour for a match.

It happened to me once 47 minutes game , i clicked surrender probably 10 times , i really didnt care i just wanted the game to end , but there was one of my team kept refusing the surrender , we won because of me i clutched the win and i was the one spamming surrender at them .

Iam surprised people still play those long games ! , surrender changed 2 votes enough to surrender , not giving up for 38 minutes means a dumb game where everything possible , probably both teams scared to fight and just waiting each others !

Why would you surrender a game just because it lasted longer than 25 minutes?

do you mean iam a troll ?
i said we won the game because of me , and my team refusing surrender because of me i got ton of kills !

look i dont like dumb games , and when i said dumb game , because its dumb , games shouldnt last more than 20 minutes .

the game i was in long time ago was super dumb , people spawn fight and die , thats why i was spamming surrender , if the jungler just stayed calm for a minute i could finish the game early , i dont like games like that i prefer surrendering and moving on , i can win all my next games and make up the loss , iam playing for fun , anything dumb in the game gives bad mood and i just want the next game .

games where anything possible is bad , you should always be a head in your games , and play careful and watch for your mistakes , long games reflect bad unskilled players ready to make the game pass an hour , its a game just surrender lets move on please .

20 minutes to me a game ending that early indicates a shitty draft on one side and or the matchmaker not giving me an even match. Long games are rare and a blessing

if you look closely in your matches you going to find dumb mistakes make it passed 20 minutes
its not something related to skills or confidence and balanced match where everyone playing good should end even before the 20 minutes , unskilled plays make games last way longer than normal.