So I was solo-queing in rank and i was in the first choice to ban heroes and pick and I decided to pick Adagio, playing in top lane. Then I went to a bathroom for a while and then…

At that time, I was really confused and pretty disappointed. I was playing in POA and saw them pick heroes (i mean wth really). Then the rest of my team chose Lorelai (Roam) and Baptiste WP (Jungler). I was really hopeless and tried my best to secure the top lane (since top lane is the most pressure role to play). It turned out i can handle the top lane and created a sweet victory in early game. It was 2v1, my opponent were glaive and ringo. While I was rotating, oh boy. The mid and bottom turret were easily taken down by my opponent in the early game. The most annoying part is my team Gwen was toxic, following me wherever I go and pointing things at me all the time in the mid until the end. Seriously wth. Then I saw Alpha were like hit, skill2, ulti, then die easily. My team Baptiste and Lorelai really tried their best while Gwen and Alpha were like crack-head.

Of course we get the big loss. This is the screenshot of my last match: 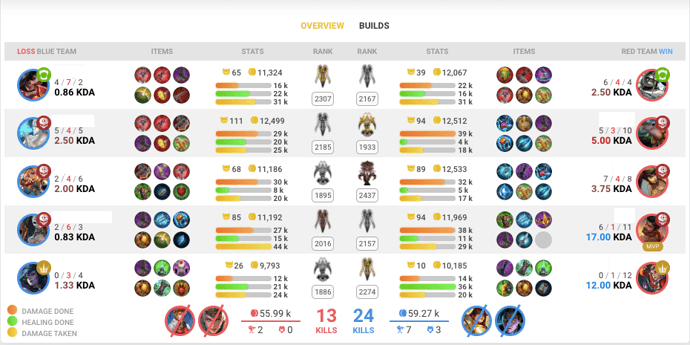 Screen Shot 2018-06-25 at 02.09.06.png930×466 232 KB
Honestly i want to dodge this match but i think i will be put into the low priority queue (which is suck) and -25 rank points. But the only interesting part in this match was that my team’s bottom lane was building cp. I think it was dumb idea then I saw my opponent Ringo was also building cp path. And I’m curious: is this the new current meta now (bottom lane CP and jungler WP)?
Anyway this is my first time joining here so i don’t really know if this is the right category

That is POA… and then people ask me why I say too many people is boosted…
No, CP Bottom lane is not meta, they are just bad.

All I heard when I read that was Zarya from Overwatch saying, “Together, we are stronk!”

I’ll show myself out.

it’s the right place to rant.

I’m really hating this WP Baptiste Meta… (well, it’s not Meta, just everybody is doing it). Well, that’s my little rant. Peace out.

I’m okay with that tbh but Mid lane wp and Bot lane cp?? Duh… and they were in the same guild bruh

it’s so easily countered. The only enemy hero that Wp Baptiste had the advantage over is Ringo.

He is player shaming? And you are here and nothing happens?

He is player shaming? And you are here and nothing happens?

First, how about being less rude in your question? Second, I guess that during the 18 hours I was at work yesterday I somehow missed the fact that the OP failed to obscure the IGNs on the image. Third, did you forget how Discourse’s flag system – through which users can help the moderators by making them aware of things they might not have noticed – works?

The OP is a new user, btw, in case you failed to notice that. A courteous reply mentioning our policy against showing IGNs of other players when the post is being critical would likely have solved the problem without one of us having to get involved. No worries, though, I’ll take care of it.

CP bottom lane is bad, also your build for top lane isn’t ideal, i would expect more tank / utility from a top lane Adagio, so CP is probably better than WP.

Personally I feel ranked is bad right now, I’m playing with top tier 9s and bottom tier 10s and they don’t understand basic drafting principles. For example I had a top lane Celeste yesterday, why, why, why, I even asked that they go tank. My roam ended up permanently baby sitting them whilst I had to 2v1 mid-lane.

I’d have thought people would have learned the basics by now certainly in higher tiers but they haven’t.

I had top Celeste during the event. On top of that she had 0 awareness and game knowledge. Like she’s 10% HP and doesn’t recall. Bad build and what not. Then I checked and she’s poa. I don’t understand how people like her climb. I guess I should’ve done the event in ranked lol. Actually had much better score there than in cas.

I specifically asked them not to play Celeste or Varya (match before I had a Varya top lane) I even offered o top lane. There response? Smash Celeste button as quickly as possible leading to our whole team getting salty befire we’ve even finished draft.

Honestly feel that ranked isn’t working right now, to many people without basic knowledge are in tiers 9/10.

Then I checked and she’s poa. I don’t understand how people like her climb.

I still refuse to play ranked because of all the issues. Ugh.

Yeah I know your pain. I was recently ranking up my alt and especially low POA bronze is just terrible. Not everyone is bad but generally people have no idea about anything. Draft sometimes doesn’t differ from t4 which is where everyone starts. Also the gameplay doesn’t differ to much either sometimes. They don’t understand they need to win bot. And when bot isn’t ahead they’ll usually lose because they win their lane because of advantages but top laners are usually stronger duelists. I don’t know if people will actually adapt already to the “new” game mode or if it’s like that permanently. But on the bright side at least you had Varya top, in casual I got bot Varya (should’ve never stepped foot in that mode).

Yeah it’s not good but on the other hand if I play only casual I’d probably quit VG in less than a week. The only good thing about casual is that people don’t throw, troll, lose intentionally and other tilt things.

I just got to POA bronze recently, damn me for thinking it would magically become better. 99% of the people here are clueless. The last time I actually lost a game was when I played casuals and laned against a previous season vg gold. And by no means am I a good player, I consider myself average. My team makes calls worthy of T4s, leaving me to run around doing damage control. For example, my team made the decision to take ghostwing despite the enemies 5 man pushing top which had only armory left. I spam pinged them to come but of course they had to keep taking ghostwing until the enemies shattered our vain.

I also have the IGN of one player who was once t8 but thanks to reset and his many losses is now lower. He built PS and SC on every hero.

People don’t get that top lane isn’t winnable. I’ve had numerous ppl claim to have “carried me” because they won bottom lane and had a superior KDA.

When you look at stats I’ve healed for like 50/60k as a hybrid adagio and actually out C/S’d my hyper carry.

I’ve acrually turned a little salty in 5v5,I’m certainly not the best player in VG and make plenty of mistakes but I’ve got better understanding than the vast majority of my team mates. It’s so frustrating watching terrible draft after terrible draft… of you play 3v3 at tiers 9 people don’t make the same mistakes.

Supports and tanks usually don’t get credit for their work. It’s tough. People were way more used to 3v3 and it was more simple. I really would have loved this event to be in 3v3 because you also have more impact by yourself. In 5v5 in some cases you can’t do anything (same for 3v3 but much less often and you can usually make up for that with your own impact). Sadly I stopped playing 3v3 just because the meta got pretty boring. I don’t wanna play the same heroes over and over.

All of that is because we lack a decent post game screen which shows what the people actually did.

That guy with perfect kda? He did only 20k dmg…
Your captain with bad kda? He took 60k damage and died only 5x and had enemies locked down for 3 full minutes. He saved allies from Fatal damage 14x

The healer healed for 50k.

This would give us more perspective post game before voting…