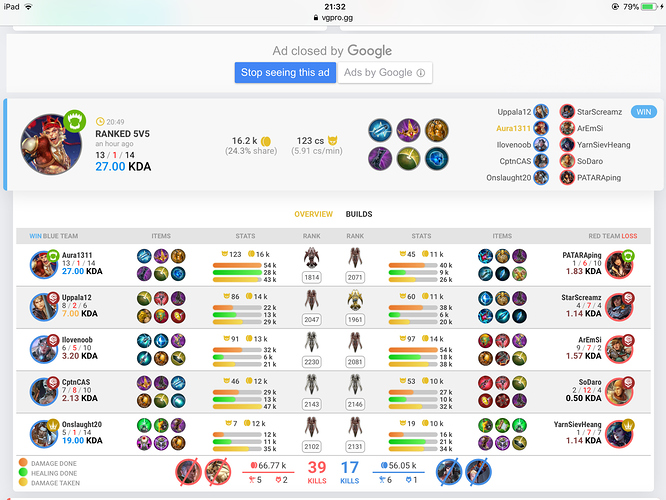 FFE701CF-2A53-480B-8237-6A68B53F7788.jpg2048×1536 752 KB
So I just learn from Gabe’s stream that Taka or Ozo can dominate top lane quite easily if they rush MJ first then follow with SC and AS. I tried it with Ozo and it felt like I’m cheating lol. Like literally I made every squishy bot laner (even if they have red buff) hide behind turrets to farm when I just keep on getting their healer and snowball the entire game. If they ever try to step up, I can just bounce on them and do like 300+ dmg early game and they can’t do anything to me. One more nice thing is that rushing MJ can ignore the OPness of the red buff since you can safely back off from ganks without getting too low.
I’m having fun exploiting this build and strategy. Ozo is secretly OP af !!
2 Likes
Xaldarian March 27, 2018, 4:16pm #2

Your build is absolutely horrible!!!

Im new to him lol…

Eve and aftershock are both healing. Stormcrown does not scale your CP damage at all.

Your build suggestion is the exact opposite of what he is trying to accomplish, and would get murdered in Lane.

He is trying to build a sustain hero, and I would guess he copied the build from Gabe. So… it probably works.

Nice job! I have run a similar build for Taka top lane with BM instead of Eve with solid KDAs. I could see Eve over BM for Ozo due to the perk. I personally like 3CP items on Ozo but will give this a try.

The fact that everyone and their mother are building AS SC on anyone anywhere is painting a clear picture that both those items need to be destroyed through horrific nerfs!!!

DE is a pretty good choice CP Ozo as well. His amazing sustain, combined with his stickiness, allows him to easily build up and maintain stacks

Yes - but Stormcrown allows you to clear minion waves with auto-attacks, precisely so you don’t have to use skills. Keeping those off cooldown is more valuable than having more damage you can not bring to bear on a player, because you just wasted it to collect 40gp.
It also helps with taking down turrets early on, which is why you want to out-sustain the other laner in the first place.

For once, it does precisely what it is supposed to do. That’s not to say Stormcrown doesn’t need to be looked at - you just picked the worst possible example to reason for a nerf with.

However if those are the reasons to build SC than the player is better off going WP Ozo.

Every single ozo i met in top lanes eats the other laner for breakfast. It’s a meme now…

The point of this build is to out-sustain and trade with the enemy’s bot laner through BoE and clear waves as fast as possible to steal their healer, slowly gain advantage and make their bot laner falls behind. And since Ozo has extremely high base dmg I dont think I need a crystal bit until 10 min of the game. His dmg combine with MJ makes you a lane bully since they’ll soon realize it’s just a waste of time trying to get you low. And if they do try to poke and harass, the wave will always be pushed to their side (thanks to SC) and they have to either give up their CS or secure the healer.
If you build a lot of CP early, sure you can do a lot of dmg but you"ll take lots of dmg too. And since ur a melee, you’ll get continuously poked when your skills are on cooldown and make urself a juicy target for their jungler.

This is summing up why WP>CP…

Idk I’ve been destroying every Vox, Gwen (with TB) or Kestrel with this build so…
I think Ozo is better when CP, if WP I can just play Rona

But you don’t use a CP build. You use stormshock…

I have a 100% winrate with wp ozo in 5v5 ranked. CP Ozo on Cooldown is weak a weakness wp ozo doesn’t have.

Don’t out tank them outheal them. 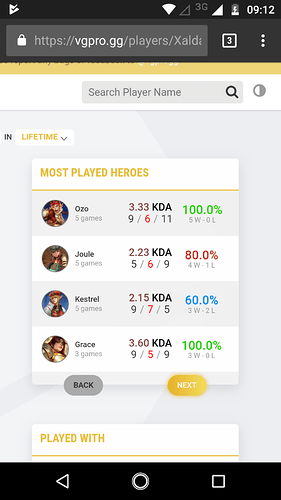 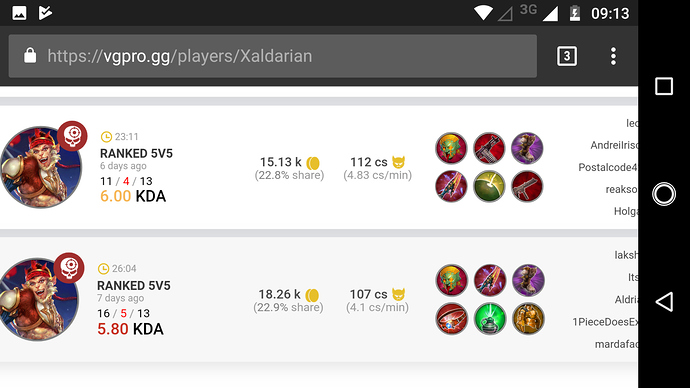 Also TB does NOT counter MJ due to the way they changed armour pierce, 10% now reduces MJ’s 100 armour to 90, not a big deal

I am playing bot mostly. Also I out heal their pokes. Triple gap closing makes me rather sticky…