I really dont watch the VPL because I think its a hot mess. But thats not the point of this post.

Seeing Leon “Troll/ taunt” in the match against cyclone is just unsettling to me. I really and honestly dont care on how he trolls but its way different from how i taunt.
Whatever floats your boat dude 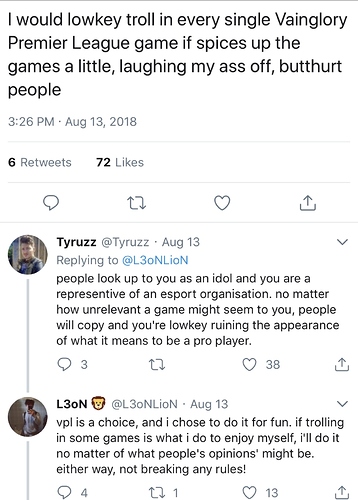 How do u guys taunt? I doubt anyone would judge but k

They way I supposedly troll is that:

When I end up low health and shoved into my turret, i usually spam my charms to lure my triggered foe into my hiding team.

It usually works and mostly in my ranked matches

I dont think my post shows any negative actions towards Qlash or Leon but its just a neutral question. ~_~

Define trolling, L3oN didn’t technically break any rules and anyone who gets upset by him taunting is just but-hurt players been spamming taunts and the recall animation in every game of the vg8.

I love using the charms, but I don’t actually use them as taunts. Aside from spamming your recall, and saying GG at the very end of the match, there’s no other way to communicate with the enemy. So, to that end, I use charms in funny situations where it’s obvious the enemy and I are on the same page. For instance, I was roaming the other day in a casual match, and almost poached the blue buff from the enemy mid-laner during a random rotation where we were the only two around. I had just dropped a cam for vision to see if I should toss out an impale, which they saw, so we both knew what was coming. I went for it, but their helio grabbed it a split-second before I did. They were on my friends list, so we both charmed each other while it was happening as a way to say “hi! better luck next time!” and “hi! you got lucky!”. Other times I’ll do it is when I’m being chased, obviously can’t escape, but have stalled for time and led them away from an objective. Feels like saying, “you got me, but I got you too… kinda.”

As for sportsmanship, I’d def like some policies for the pro scene.

He killed himself un the enemy sanctuary by running into It, other than that i see no problem.

Thats you, but even SEMC said that charms were designed to be used as taunts, how can you ask them to put rules about sportmanship when even the company encouradges to do It?

Its not about being a butt-hurt person but ive seen taunting in the vg8 many times, but it was never taken to the exent of faking that your AFK…

He said he was spicing up the game in which I can assume that we both think that the VG competitive side is a little boring but I dont think thats the right way to spice it up.

I was referring to the pro scene, in response to unprofessional stuff like int’ing in the enemy base before the match is over.

I don’t have really have a problem with players using charms as taunts (although it can get audibly annoying, which I think impinges on a player’s ability to enjoy the game at a more fundamental level). They’re just fun animations, after all. If someone is genuinely toxic with them somehow, I’d say that should be a job of the end-of-game thumb ratings to pick it up.

I think this is unneeded drama caused by few people and resulting in mass witch hunt against Qlash’s “trolling”. I don’t see how it is a big deal and especially why it should be against the rules to kill yourself in enemy base. If you tilt from that I don’t think you’ve got a pro player mentality in the first place.

Now what in my opinion gave momentum to all that talk at least last week (I think? Not sure exactly when) is casting. I got huge respect for Flash. I was die-hard TSM fan and I love the guy but his casting pissed me off so much. He began with the picks. Saying Qlash isn’t respecting enemy by picking what they did and saying how he dislikes it. Umm if they can pull it off then what’s the problem? If you can’t face them when they troll it’s not their problem. Should they restrict themselves of some picks because someone doesn’t like it? Especially when it’s not broken or toxic pick. But the thing that was the worst was it was coming from Flash. Roam Koshka, jungle WP Samuel and WP Lyra and what not. TSM were literally the BEST at trolling and he was their team captain. How does he dislike the picks now? No just no.

@RiseChu And again it was Flash’s words. How can you tell if he was faking AFK? Again, if other teams can’t handle that when it’s completely off meta then the competition is too weak or those teams shouldn’t be there. Either way it is NOT a reason to put rules against playing the game however you like it. It’s not exploiting, glitching, griefing or anything game breaking. You don’t like it? Win then.

I mean there is no way to prove that someone faked afk what if someone had a huge lag spike or his game froze then he came back and secured a kill.

I know, thats why i think FlashX had no rights to complain about him.
@Bobmax i couldnt have said It better.

To start this off: I never used taunts prior to them becoming permanently accessible with the latest patch.
“Renting” them felt like a waste of Glory, no matter how useless it has become, and the whole idea of “taunting” is toxic by design.

Even now, I only use them when my own team is playing like lobotomized chimps with an OCD focused on pings.
Then it’s time to farm the jungle, leaving them to their own devices - and each time I refuse a surrender while their death toll climbs into the tripple-digits, there’s an encouraging: “Don’t give up!”

The problem with this sort of conduct by a pro-player, and why it is received so poorly by a lot of people, is that those of us playing YOLO-queue are constantly subject to toxic bullshit. It takes enjoyment out of our recreational time, and that is the intent.
Ironically, L3oN’s response is exactly the egotistical crap you would expect from a troll: “I’m doing this to have fun! If annoying other people adds to my fun, I’m going to do it!”

No regard or respect for the other players involved, his own team who catches flak for what he does, or even the viewers. Just a complete lack of understanding for the concept of personal responsibility.
You can call that an adequate reflection of the VG-community at large and nod it off, or you can ask for professional conduct by a professional player. The latter isn’t too far-fetched, in my opinion.

People are toxic regardless. You’re just picking him as a target to throw your anger somewhere if that’s the case. I don’t see why that is a big deal. How bad is it when enemy suicides? And besides what better way to destroy your enemy than tilting them? People never take into account mental state.

Whether or not other people are toxic has no impact on the ethical implications of acting like an asshole.
There’s a whole bunch of mass-murderers out there, too. That’s probably no justification to try it yourself, though.

You’re comparing dying yourself (aka 0 impact on enemy besides giving them gold) to murderers? What? It literally changes nothing. It’s their fault it they tilt and I haven’t heard other teams complaining. Only people like in this forum, twitter and such. Is it really that serious?
And you ignored the rest of what I said. Isn’t it smart to tilt opponents? And are you right to be angry at Qlash for your soloq experience? I personally don’t think so.

You’re comparing dying yourself (aka 0 impact on enemy besides giving them gold) to murderers? What?

And you ignored the rest of what I said. Isn’t it smart to tilt opponents?

That something is “smart” is no justification, either. Conning people out of their money is smart, too. Does that make it acceptable?

And are you right to be angry at Qlash for your soloq experience? I personally don’t think so.

I’m not, and I never said I was. I’m saying that this sort of behaviour is widespread, that it is undesirable, and that I am expecting more from people who perform in a professional setting.

I think it’s perfectly justified using all tools to your advantage.

It’s a taunt, a provocation.

Very useful to bait enemies to their doom. Spamming them is hard to do anyway, So I think it’s fine.

How is it unethical though? You give them free money. Also if that is not morally acceptable then I guess next time Qlash have a game they won’t be allowed to invade enemy jungle in case their opponents get sad for it. No it is not wrong. Taunts are called taunts for a reason. Suiciding doesn’t affect enemy besides giving them bounty. And I meant your example wasn’t really good as murderers have an impact on others, huge actually as they murder. Taunting and even gifting gold doesn’t impact negatively anyone but his own team. But I guess they’re okay with it. Actually as I said before I haven’t seen a single pro team complain about it no matter if they’re taunting or being taunted. Can you show me one of the actual “victims” opinion?