So This Just Happened

A couple days ago I got a Saw who had 1/12/1. Even though I had 16/4/4 we really only ended up winning because the Phinn we got was a god. 10 assists very few kills and deaths but he hard carried with his tank play. I wanted to post some screenshots here to thank him cuz i have never gotten anyone who did what he did that match

Im pretty convinced that the matchmaking is bogus and Im being sabotaged by it. A mod said that the reason why the ELO system is used is because it is accurate. I am going to go ahead and call BS on that.

I’ve heard that some game devs are manipulating their matchmaking system to force some losses to keep players engaged longer. I thought it was far fetched but after dropping 22/0/4 only to lose 4 in a row a few days later im not so sure anymore.

ok, i just searched for your name on vgpro.gg to look at the matches.

this leads to the biggest problem any elo system has. it is only accurate if everyone in it plays a sufficient amount of games to actually end up on the skill tier they belong into.
a part of this problem is that this is a team game. someone on his way down will reduce the elo of other players he gets matched with.
this is the issue that you get for using a 1v1 rating system on a team game.

you are not being sabotaged by the matchmaker. i srsly doubt that vg has even enough players to effectively do that.
your win afterwards had you with two other t4 silver vs two t4 silver and one t4 gold player. you won this game (due to an actual support and the ringo doing 50k in damage, allowing you to do your job)

what you want is to get up to a higher tier to reduce the chance of meeting an inexperienced player. i am no taka player though, so i cant give you any build advice, but you shouldnt go for a slumering husk against players without a big burst damage. go for armor or shield instead.
or get koshka. you get a week with her wrecking everyone.

some advice on losing streaks: stop playing ranked after you lost a game. wait until you are no longer tilted before going back in. this really helps.

Then match me with and against T7s then. I just started playing the game seriously a few days before patch 2.12 and I am comfortable saying I see no reason why my win rate is suppressed because im forced to carry new players. This is my problem with the current ELO system, its only based on wins and losses.

While i do play badly some games, I have enough decent performances to justify being at least T7 but Im bouncing around t4 silver and gold because of useless Saws and Ringos.

That is all i had left to say. Change this ridiculous ELO system to something that accounts for player performance. I wonder if that site also has my KDA id like to see my stats.

I will probably delete this thread in a few hours.

While i do play badly some games, I have enough decent performances to justify being at least T7

It’s a team game though… if you haven’t won enough as a team player to reach T7, then you’re just not there yet. I’m not saying you’re unskilled, and yes, it can be arbitrarily hard to win sometimes, but given enough games, you’ll end up in the right tier.

Even if you have great stats though a match, if you lose, you lose. There’s probably something you could be improving on to see more wins. If you’re looking for help or advice though, this is a great place for it. Maybe upload some footage of a couple recent games and people can critique your performance for you?

While i do play badly some games, I have enough decent performances to justify being at least T7 but Im bouncing around t4 silver and gold because of useless Saws and Ringos.

Actually, learning how to function as a team – and part of that is being able to compensate for your teammates’ weaknesses – is how you get to tier 7. Not simply feeling like you have enough solo “decent performances.” 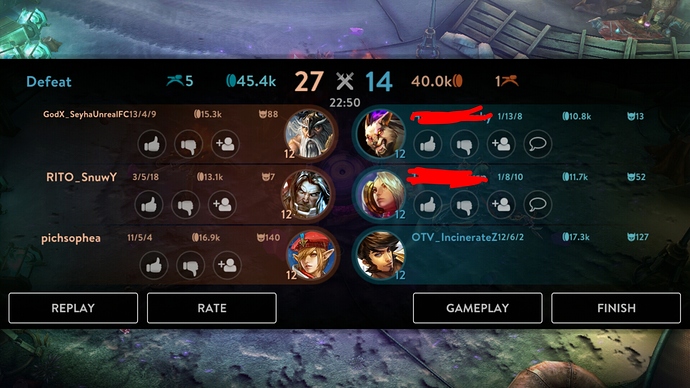 I actually had worse than that today. Someone on my team had 1/19/8. 19 deaths. I didnt even know that was possible.

There are, in fact, ways to communicate in VG, limited though they are. Also, experience will give you insight into what a teammate may be trying to accomplish with his/her build or with a tactical decision. The in-game pings, in that case, become more meaningful.

I actually had worse than that today. Someone on my team had 1/19/8. 19 deaths. I didnt even know that was possible.

Lol, I think you have to try hard to manage that.

Lol, I think you have to try hard to manage that.

I probably did that a couple times when I first started lol… when games stretch out and you don’t know how to build properly, it’s pretty easy to rack up a lot of deaths without many kills in return.

I mained Celeste when I started playing – because I liked the idea of hitting the enemy from afar and because I understood how her abilities worked. I had absolutely no idea how anyone else worked at all. My 8 year old daughter taught me to play Koshka a month or two later. True story.

Look at your allies like bots. They provide hp to shield you and put out damage. Use your kit utility to extend their life so that you as a player gain more damage and shielding from them. A stun or a slow can often save an ally in need. Instead of saving that for a kill to make you look good and them bad.

That is teamwork. It also benefits you.

My wife would kill me if I’d let my 6 yr old play lol.

So you said you don’t deserve to be in T4 and play with the new and inexperienced guys, right?
It is true that the system is a bit unfair because in a 3v3 match, just 1 person troll or feed will result in loss. That’s why I recommend you try to find a friend (maybe on forum or discord) to party and climb together. You can use voice call on Discord to communicate! Trust me, if you really T7, you can make it!

TBH right now there are really unbalanced matches in t7g-t8 too. Boosted noobs all the way + toxic players like times more than before the 2.12 patch. Everyone is playing 5vs5, simple as that. Only a few good players fire up 3vs3 here and there, but rarely as if soloq (and as almost noone plays 3vs3, you can’t find a party member = soloq)… the experience is bad most of the games.

This is from a guy who made T6, was stupid and played tilted and now is T4. I hear you on the frustration, and it does feel like SEMC is picking on me sometimes, but I am confident they are not.

I have realized that each time I drop, the problem really is me. Whether I’m missing it on the map, my positioning is off, I’m building wrong, or just having a bad day. As I focus on different parts of my game, I m finding whole new horizons in the depth of game play. As my situational awareness and technical skills improve, I am finding that i able to start compensating for my team. I am also being put in a position to practice all the heroes and round out my pool depth for when I get to the upper tiers. (Sounds like some deep drafting will be happening in future 5V5!)

Last, I’ve heard a few times now, that if you can focus on your performance and count that as your win condition the ELO will follow. I have found that when I can do that I am enjoying the game a whole lot more.

Good luck in the grind.

This is a really good post and mirrors my own assessment of why I’m still stuck back down in hell T4. (I also don’t play ranked enough to move back up to where I was a couple seasons ago.) @idmonfish mentioned elsewhere that he doesn’t feel like he’s at his best unless he plays regularly over a few days to knock the rust off. All of these things can be factors in why people are where they are in VST.

Hey Ultidon, tell you this, I have been there in the and carried players and got tilted. I also gotten 22/0/6 but that’s only in t4. I had also said to my friends that I deserve to be at a higher rank but now when I am at t6, it’s really not as you expected. Its harder then you tgink. Yes, it may be a higher rank but there are still newbies but I learned to trust them as everybody who played rank matches does not want to lose. An advice to you, no matter what rank are you or what Heroes your team lock even if the opponents counter it, trust them with all your heart，stay chill and don tilt.

I would like nothing better than to trust teammates but after the 20th ringo that forgets he his ranged and krul is going to rush him I have learned the hard way that i cannot trust fall my way through ranked.