@hazeleyes I do not intent to player shame, the players in question are fantastic but their new accounts ruin the in game experience for everyone.

So I just played a game where I had to fight a known smurf with a team of poas. The players in question perform better than any VG silver I ever saw.

I won’t shame anyone nor bash anyone I just want to show a grave issue in the matchmaking/MMR which causes boosting on one side and a waste of time and points on the other side.

This is the match in question where two probably pro players duo que on smurf accounts. 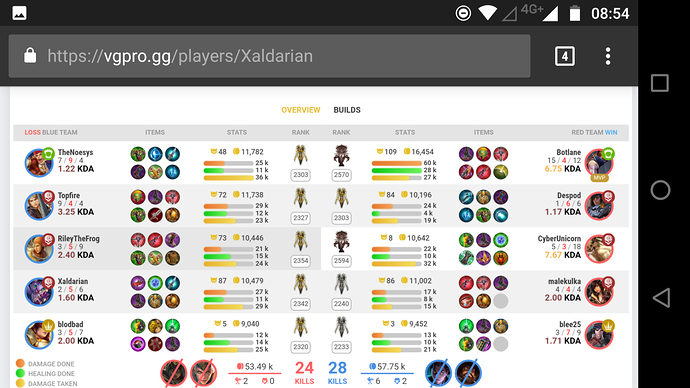 I am posting their own stats to show how outrageously well they are doing and how bad that is for the game. 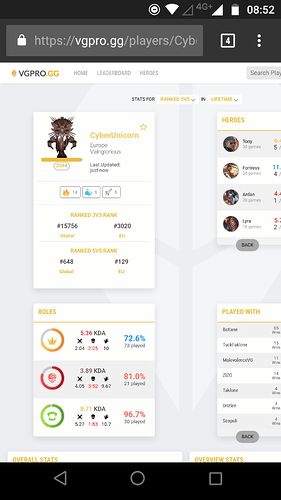 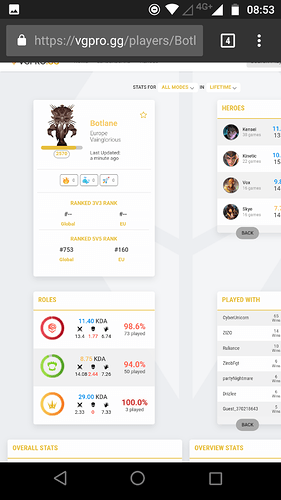 This Duo has an almost perfect record when playing together which shouldn’t be, they should face people their own skill. 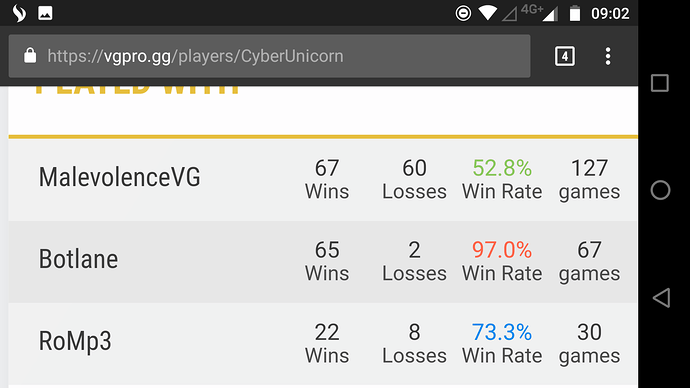 Well one is 6 points away of silver and the other is 30, with their 90% + win rate they both have vg silver mmrs. The issue here is not with smurfs, these accounts are high elo they should have never been matched against you because of the elo discrepancy its a matchmaking problem. Them going up against you would be the equivalent of you and your duo partner going against SA silvers and golds.

I think the matchmaking fail when it matches duo with trio against for example 1 solo 2 duo , from seeing the skill tiers I guess that what happened , the best way to balance the match was giving the vg players SA teammates .

A lot of smurfs lately and as the grind in vg bronze is longer, they stay there and destroy everyones games. Smurfs of pro/real vg gold players, I mean. Dunno why they do that + most are not even friendly if in your team, contrary - rude, most of the time or unresponsive.

Enjoying the game for the wins only and thus smurf after smurf? Or to play single possition and have a stats only for that (botlane case, looks like a pro that wants to see his only bot stats in stats sites). But it ruin the game for all the other players - if you face it, you will wish to uninstall the game. If you play with him, you feels useless.

That would lead to horrible experience for both the duo and the SA players.

I really wonder if there will ever be a solution to smurfing. MM should somehow be able to recognize smurf accounts.

Somehow… I don’t know how.

Those who are stuck in low tiers who smurf will forever be stuck in low tiers, no matter how many accounts they make. Sure they use it to cheat, experiment and maybe they’re doing it for a friend, but ultimately, they won’t be reaching VG.

VG players who smurf, I believe, do it out of boredom. They hit the level max or they feel like they’re not progressing. I could be wrong. Maybe they’re selling accounts.

It’s such a complex issue I just don’t see an answer that will actually work.

That’s exactly how you should NOT match make but it is actually how the match maker works, it compensates players with high mmr others with low mmr leading to very unbalanced games. Its the reason why vg golds never rank on their mains, they create smurfs and get them to vg silvers cause they always get terrible games on their mains. Fixing the match making would midigate to a small the smurfing issue.

Smurfing is not a problem, its part of every online game yes they’re frustrating but there is nothing semc can do about it, they can’t stop players from creating new accounts. And no they can’t track their IP because its illegal they can get in trouble in court for doing it

very true. But the proposal i make isn’t down the illegal path.

it’s to have many “progression” systems. levels. achievements. etc that it would be worthwhile to keep using your main account.

it won’t eliminate smurfing. but it would encourage players to keep using their mains, thus… eventually… they’ll forget they even had a smurf.

Actually now that i think about it they should change how elo gains work on new accounts it takes so much time to get a new account to vg even with a high win rate. I created a new account and once i got to tier 6 gold i gained 10 to 15 elo for a win, once i got hotness i would get 13 at max and in SA i get between 8 and 10 elo. New accounts need more games to get vg than a regular account so they stay longer in low tiers ruining more games. My account had a 87% win rate, not brilliany i know but it doesn’t warrant such small elo gains

I think SEMC made good matchmaker. You can see that it is trying its best. Its the lack of playerbase that hinders him. They need to draw more players.

It seems like simply amazing players are all day birds ,not night owls. When i do get match in my tier often get matched with people from my friend list.

What im trying to say is by vgpro im 4000 player in eu. And im only tier 8. Only a fraction of these play at same time, and that number is even smaller because it is inflated by smurf accounts of same people. So no wonder for mismatchs.

I think its great that game has players like botlane and unicorn. Fun to see such level of gameplay and this game in hard position as it is would feel poorer without them. Although it sucks going against them.

(played once with botlane).

Actually I believe they do track IP addresses - 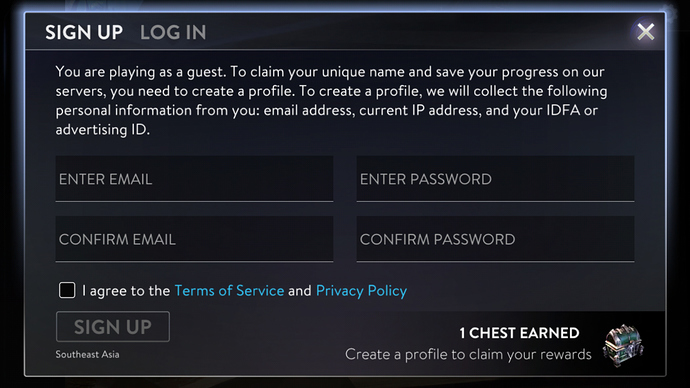 i haven’t created a smurf, ever. I don’t remember such detailed data collection. when did they start collecting all that? do you know?

based on their elo and winrate, they duoq probably can handle vg silver well…

Like hell they can. You can bind one account to one device. Players can only play from a bound device. Problem of smurfing fixed… Or at the very least limited to 1 account per device.

It’s also bad because these players mess up a possibly perfect match. Since MM doesn’t use MMR but instead skill tier we end up with 4 VG’s on two sides and one POA bronze player on both sides, one POA bronze player possibly being a smurf. If we had smurfing along with a MMR system that worked around others’ MMR and not skill tier it’d be like trying to have an account with a high WR. But atm with the lack of players its basically just ruining high tier matches and messing around with lower tiers.

i play one account on multiple devices. i don’t think that would be a popular solution.

You can’t stop smurfing. i still think the best way is to encourage regular use of a main account.