Simple Question about the Swordsman

Simple Question: Why does Kensei have a overall higher base stat than BlackFeather?

Is it because BF is classified as a Assassin? Just curious to know cuz i love playing Swordfighters in any games. @Fiora 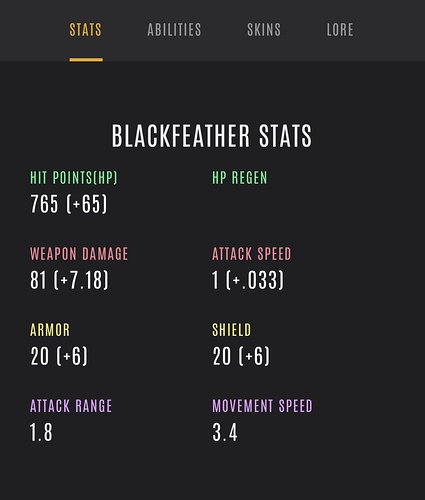 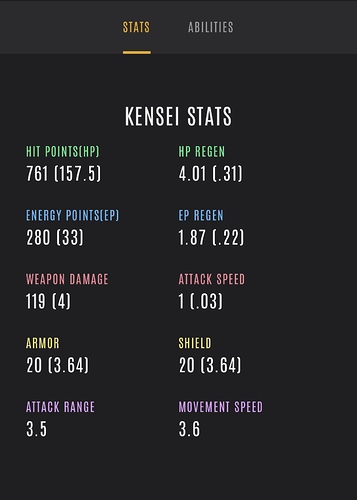 What stat exactly? The initial wp? Because Kensei only has a 40% WR on his AA.

Health and Weapon Power to be exact

Weapon power already answered and health… because he took BF’s job as a duelist, so he needs to sustain.

Kensei has better stats because he is an AA focused hero, BF on the other hand uses his AA frequently but also his abilities. If Kensei is on top of someone already he shouldn’t use his A because it would be a waste of DPS. His abilities are mostly for escaping and catching up to people. BF on the other hand uses his AA but to use them most effectively he needs to pair it up with his abilities (his A), his B can be used to retain your life throughout the duel and works as an AA reset (just adds onto your DPS for that single time you use it), and his Ult can be used as an escape but most preferably so you can run it down midlane and get BP stacks from the enemies who are hopefully in a linear positioning. BF doesn’t need those stats but Kensei does.

ah i see, thx for explaining it guys

Wait how is using A as Kensei a waste of DPS. It’s literally boosting his DPS. It’s AA reset and he can get like 4 AA and 3 As in 1.5 sec. It’s literally the thing you need to do. Also it let’s you get barriers in 1 hit if you land it on multiple people.

its a situational dependent move. late game when kensei’s attack speed is a lot you should just use his AA and leave the abilities as you can use them to catch up or stun with his BA and BUlt combo. If you use his A in middle of AA it is actually slower than the next AA. But in your situation its was better to A as you will hit multiple enemies. Hence I will say its most preferred to just do AA but a A can also be used

First of all he has better movement speed than Bf, more dases and lower CD, more CC than Bf. If one has problem catching up it is not Kensei. Also his abilities are much wider and stack much faster. And finally if you are AAing slower when using A, AA, A, AA then you’re doing something wrong. It’s not the hero or ability. You can not AA faster than an AA reset.

I though I already clarified that both situations are 1v1 but I guess not. Obviously if you are teamfighting you want to use that A to get BP stacks and barrier. But if you’re full built and use that in a 1v1 scenario where both of you are standstill you’re losing DPS from the animation of the A. The A has the tiny amount of time where you can’t do anything (as can be seen when you try to consecutively dash). Time is crucial for an AA hero who just wants to finish things off fast yet get the most out of it.

Regardless you use his abilities to get the most out of his AA anyways, they aren’t meant for damage but instead CC/catching up. BF on the other hand gets the best of both worlds. His A can be used to chunk hard, his B used to do damage and apply a barrier on you (no matter how small) and his Ult is basically a reflex block, dash, and triggers basic attack effects. I wanna say that Kensei has terrible WP ratio’s on his abilities rn but I don’t think I can recall that properly or not.

If you lose DPS by resetting AAs you are doing something wrong. There is no way to attack faster than an AA reset. I can record it for you if you don’t believe. Bf’s A barely does damage in the beginning and was also nerfed so execute doesn’t scale anymore only bonus damage. On point helps him survive it’s not main source of damage. If one of the 2 is more ability based it’s Kensei not Bf. There’s a reason SSW is meta on Kensei and not Bf.

I wondered about this also? Someone asked me changes to kensei and I said his base wp was way lower than other heroes, but now it’s higher than other bruisers? His early game isn’t bad, late game is still oppressive. I’ll keep banning him thank you very much.