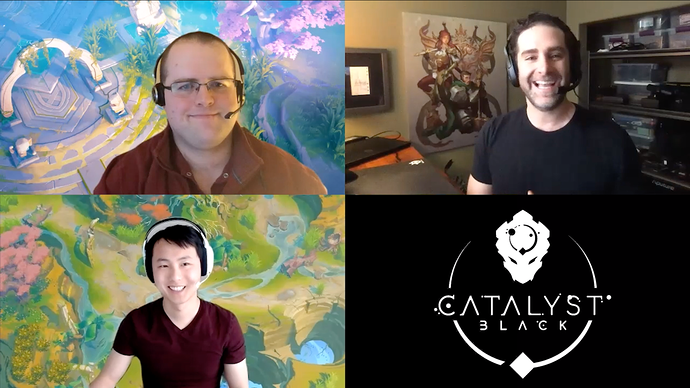 We’re finally ready to lift the curtain on what we’ve been working on for quite some time now! What was previously “Project Spellfire” is now “Catalyst Black.” Take a look at the video below for some early footage and some commentary from the team.

We’ve made some neat new upgrades to our EVIL engine tech both in terms of graphics, performance and authorability. But we’ve also spent a lot of time, learning more humble lessons than we can count from our Vainglory journey across design, technology, marketing and how we work in general.

Probably the most encouraging thing I’ve heard from SEMC in 2+ years – there was no need for Kristian to make this comment, which makes me believe it is really coming from his heart.

Although their timing is unfortunate, with Valorant currently attracting all the attention in the team shooter space, there’s certainly room for another game in that genre – particularly one that’s cross platform.

Although their timing is unfortunate

I believe in the opposite. It seems like some leaders in the industry predict what type of game will be widely popular in the near future and bet on it. Some investors then go out invest in companies like SEMC in order to compete with big gaming titles, who also predict popular games in the future. But I could be wrong.

I actually love this artstyle.

The only thing Im wondering is that if there is any VG aspects still going to be in the game.

I’m a biased SEMC fanboy, but the first impression is very good. It seems like they went in the right direction at least with the genre and structure of the title. Weather the actual gameplay will be enjoyable is impossible to know right now, but there are a couple great structual choices I would like to point out.

Accessibility
Classic VG players will hate to hear this, but VG is not very accessible. Even compared to some PC MOBAs like Smite, the game has very precise mechanics. This new is title clearly structured in a much more casual way. Once you go beyond 7 players (and most compettive games stop at 5) you cannot really have truly competitive matches. This is a lot more like a title like Battlefield. While you can demonstrate a high level of skill and strategy, the large battlefield makes the kind of precise play and counterplay you would get in a title like CSGO, League of Legends, or Overwatch, impossible. What this opens up is the ability to hop in and out of games stress free, and focus more on enjoying the game mechanics rather than playing to a precise meta. In a 20 vs 20, losing a single fight won’t drag your team down.

Social
Yeah, VG ha a great community, I made many friends in this game, but be honest, were you ever able to get many people you knew IRL to play the game with you? Other MOBA players had the games they were already commited to their respective games, and anyone outside the genre could takes 2-3 weeks to really get into the game enough to make playing together enjoyable, and months until ranking together could be viable.

In this game they make a point to mention you can hop right into your friends matches. No more waiting for them to done a match, 40s after opening up the game you can be working with your friends. This is huge especially for a cross platform title.

**Art style **
Yeah, the game looks like fantasy fortnight, It’s not the refined moody VG look we are used to, but in the end it is probably a good call. It still has a unique flair (a lot of the architecture looks very Gythia to me), and this does help to attract a broad audience.

Potential Pitfalls
The core idea of this game is good. It’s fresh, but not so new mainstream audiences won’t know where to start, and just works as a concept. There are a couple place this game could easily fail:

I’m excited this game looks promising atleast for a mobile game. Hope they don’t go oop- like uh- …before

I agree — I like the unique drop in/drop out feature, and I think the transformation “ult” looks really cool.

Quite excited to try this!

Huh, the fact that it’s a shooter kinda caught me off guard. I certainty didn’t have any particular expectations, but it being a shooter surprised me. That being said, CB looks really interesting to me. The seemingly large amount of customization seems neat in order to make a playstyle that perfectly fits your preferences is neat and I think the transformation mechanic is pretty unique. I really like how it looks visually so far, even if the default player character looks a little generic imo.
I’m also pretty happy to see how they were seemingly able to learn from their mistakes on VG. Hopefully they can make the game more sustainable this time around, without making it P2W or anything, so a CE of it doesn’t happen too.
On another note, I’m interested to see how they’ll balance the different control schemes bc in a shooter where accuracy is the most important thing, virtual joystick seems to be very disadvantaged compared to physical controllers and keyboard and mouse.

i must say that i am quite excited. masks are very cool. I haven’t really played anything in this genre though and i’m wondering how you would win if you can leave and join games at any time. it doesn’t sound like the games finish?

will SAW come back as a primal god?

If you were wondering whether or not to join the Catalyst Black discord server, I’ve gone ahead and bitten that bullet for you.

Just don’t. The general is full of people who were banned on the original VG server shitposting and asking for mod status. I saw NinjaBryden in there which was neat I guess.

Also they have a feedback, bug report and fanart section when the game isn’t even playable yet. I dunno about that chief.

Also the game seems ok but I’m concerned about the replayability when it’s essentially Agar.io with guns goodbye.

I saw NinjaBryden in there which was neat I guess.

Was he thriving or dying?

I really cant handle the VG community sometimes. Though I did have nice little lore convo on the VG discord last night which was a first.

Well, the game looks neat. I know, that for now, this game is Pre-Alpha, but what I’m concerned about is how they will monetize the game. Will masks (basically the game changing ability) be available for everyone with only cosmetics to pay for, or will there be a gacha type system where players have to pay to unlock more powerful masks? I know, I’m just being pessimistic with several games that use that strategy, and I shouldn’t be too presumptuous when the game is still in Pre-Alpha.

I also realize that this game, from the looks of it, seem to be a very easy game to pick up, unlike Vainglory. It would probably be some kind of double-edged sword, where on one side, it will attract many players due to how easy it is to pick up and play. Like literally, from what I see, all you do is jump in, shoot around, roll to avoid damage and activate the ult (mask) to do some carnage. They also insinuated that you can leave the game whenever you want, without any penalty.

On the other hand, will the game be engaging enough? So far, looking at how simple the game’s objectives are, it just seem too simple for a player to stay engaged after long periods of time playing it. They did say the whole map will be like the jungle where there are going to be a lot of jungling and counter-jungling, but it wasn’t showcased in full yet, with the exception of a few monster creeps here and there. The freedom of choice in the load-outs that players can choose would be very interesting to see though.

Overall, I’m excited that Project Spellfire has now been revealed to be Catalyst Black, and I know that the game would be subject to changes in the future. And I also wish they wouldn’t rush this game out when it isn’t ready yet. Hopefully, SEMC’s experience from Vainglory will help this game in the future.

SAW coming back as the Primal God would be hilarious and heartwarming for VG players. Still, I wouldn’t imagine a Primal God handling a machine gun.

If they decide to throw in VG-based stuff, I’m gonna be a little disappointed if Kraken doesn’t end up being a primal god, even as a skin for one or something. She would fit so well as one imo.

In general these kinds of games are large scale 3rd/first person shooters on PC. Usually you’ll have a 5-20m match times, with varies maps and game modes. The idea is you can drop into a room and sway the tide of battle, but you won’t be supper committed to the continuity of that specific game. It’s more about the experience, if you can drop in and take a key objective halfway through the match, that’s the enjoyment you get from it. In battlefield this might be something like playing a medic and helping a specific squad push onto a key point in the map. Weather the wider battles goes your way is less important the outcome of that small section of it.

In general these games won’t have a ranking system, and if they exist it’s to keep new players from the really good players, not necessarily to foster a competitive scene.

Where SEMC mixes this is up introducing MMORPG elements Into this. Where in Battlefield you might be trying to capture a point or get a bomb to a certain location, here you’ll almost certainly be taking down NPCs that sway the tide of battle or are the objective itself.

Correct me if i am wrong but isnt this game in a way similar to agario, you join a lobby and the game ends by either you leaving the lobby or dying. If that is the case i am massively dissapointed, sure at first it might be great fun but it will get repetitive and boring very quickly. I can see myself playing this game for month or 2, not the 3 years that i’ve invested on Vg.