I’ve been playing ranked matches recently and have been matched with TIER 5 BRONZE LAST SEASON players while im TIER 8 LAST SEASON!!! the matchmaking rater has been useless as im paired up to the same stupid players next round even though they are different persons despite me rating the match 1 star all tje time. PLEASE REWORK THE MATCHMAKER

While the matchmaker isn’t the greatest right now, your complaint has nothing to do with it. Just because you were 3 tiers higher than them last season doesn’t mean they aren’t relatively close to you now.

Also, the more you rate 1 star and downvote, the less it’s weighted. Try rating accurately for the best results, not just based on if you win or lose

Ok i have been playing this game for almost 3 years and I admit that I stuck in those two lower tiers. However my winrate is more than 1400 and I am not dumb to play this game. I know about item builds. What I am sad about is why in soloQ I am paired with new players who doesnt know about the heroes and building items? Why should I play with Skaarf bringing Tornado Trigger and Storm Crown? Lyra and Celeste full red of weapon items? Why would I paired with noobs? I should be paired with lower tiers players as equal as mine. Or maybe VG has lost many players so the matchmaker did it randomly and dont notice about the mmr, winrate and account’s age.

There is certainly a problem with the matchmaker right now. Personally feel they struggle to get 10 players of the same skill set at various times of the day…

I’ll be matched with VG gold one minute and the next I’m paired with CT silver. What I actually find is games are better balanced after 9pm GMT in the EU server, kids go to bed and the more mature players come out to play.

I can show you gaves where people have 6 tiers difference CURRENTLY. Not last season, now. His complaint has everything to do with match maker. What should he rate it if it’s actually so useless? Give it 5 stars because it matched people 5 tiers apart?

There were very few exceptions. However, the few that he was the lowest VST he did well in, suggesting that he has a similar MMR. This means he probably was a higher tier and fell from decay or just hasn’t climbed from the reset. What most people don’t realize is that MMR does not equate to your VST.

Sure, the matchmaker has some definite issues right now. However, it is getting better. I also repeat - his complaint has nothing to do with the matchmaker. Personally, his matches look fairer than most, so I have no idea what he is complaining about - aside from a number on a loading screen representing last season’s VST.

Haven’t checked his games but alright. Give me some time I’ll find a few games. You just explain to me how you would justify it. 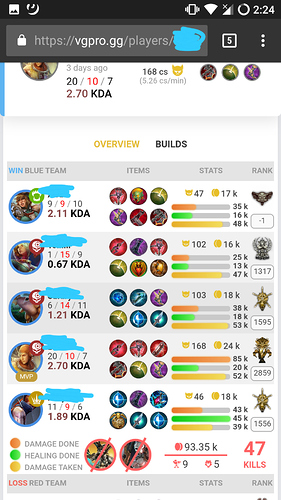 This seems perfectly balanced to me. This Celeste definitely has very high MMR, just like the Skaarf. 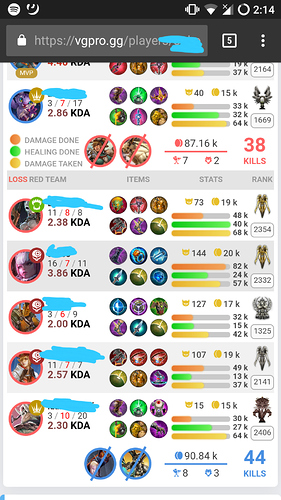 This SAW did as much damage as our no offense roam. But his tier doesn’t make a difference of course. 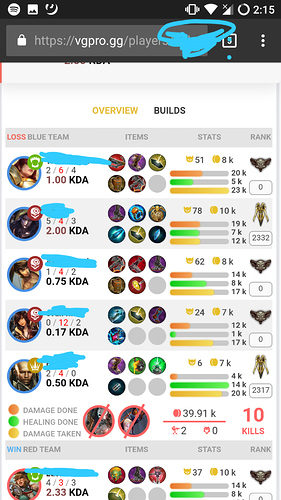 This Skye’s MMR must be as high at least as many deaths she has has right? Probably not. As we can see match maker isn’t to blame. It’s definitely not broken.

Lol these ranked matches? If so you’ve got my condolences…

Yeah it is ranked haha. Except the Vox game. Still ranked but it is Leon’s game. I just remembered what he had on stream and that’s why I searched some of his games but to be honest I’m pretty sure all pro and non-pro players who solo queued this or last patch have experienced that. This is why I play 3v3 and not 5v5 unless I got full party.

Ohhh for sure I’ve played with pro players in 5v5 one minute then a bunch of scrubs the next… and before the scrubs comment is jumped on it’s fairly obvious when your paying with a lower tiered player, you can visually see what they’re doing wrong in game.

Yeah definitely. It is easy to tell and most don’t even get how comps work. After calling you noob and picking mid Ardan in draft they ping you when they die even though it’s only their fault. They can not even realize they’re at fault and I think SEMC is at fault as they shouldn’t even be in those games in the first place. I don’t wanna offend anyone. Everybody’s been there. And it is not their fault. I’m mad at the match maker not players.