How viable would you consider top lane Reim to be?
I just tried him again and had decent success. I had a lot of deaths because I was tanking and my allies ran off quite a bit. But my damage and kills were rather high too. Took several turrets in various lanes too… 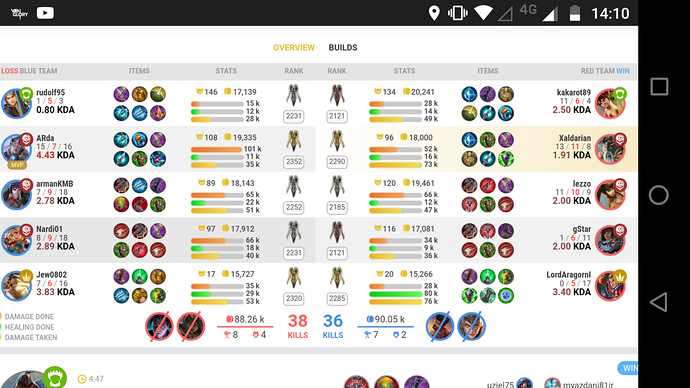 Haven’t tried but I don’t think he would be good before his passive is fixed. It decreases his tankiness too much.

Not viable, unless you’re against 5 melees lul

How come I had positive kda and nr 2 damage then?
If my allies had given more cover fire I would have had far less deaths…

I had to kite the hell out of most of them and had a very rough time fighting.

I used to main Reim in 3v3, it takes skill to chain his skills at the right spot within the right timing.

Dismissing everything because you think the enemies were bad doesn’t help the discussion nor is that a correct assumption.

No, you asked that if a hero is weak, how can you obtained positive kda using It, and i just said how. Its reim against a ranged bottom laner (Gwen), who counters him and also had PS, meaning that if they were half decent they would has just snowballed you hard, but they didnt, so if a player doesnt know how to abuse its strengths, cant win a match up against a hero they counter, and they build horribly (cath) i can assume they are bad.
Top Lane reim is mediocre at best, he cant tank thatnks to his lack of FH (stupid bug), he is countered by ranged heroes, who are his match up as they are the bottom Lane, all this in a 2v1, sorry but no, he is bad IMO. Also, he is not that difficult to play.

Have you seen the stats on that gwen? She is not bad…

You can work around Reims bugs…

She is not that bad but she couldnt snowball a hero she hard counters in a 2v1 in her favour. Maybe she isnt bad, but she isnt good either.

I don’t think it generates enough. And there’s a reason I assume that. I haven’t tried him but I have in 3v3. He struggles surviving there so having 2 more opponents doesn’t seem like it would help him.

I mean his fortified health bug with his autos killed reim he’s not viable at all, if it was a vox or a skye or kenetic in bot lane instead of gwen and a Skaarf or a Celeste or Samuel in mid instead of Varya would have been a different story. I would say stick to utility heroes in top lane so Grumpjaw, Cath, Ardan, Tony, Adagio and Lorelai i wouldn’t recommend ever picking Reim even in against a melee comp top Churn or Phinn would be much more viable

Cath was taken by enemy side. Our side took Lyra as captain. Utility Adagio seemed useless and Cath/Adagio are my main toplaners. I tried Reim again.

Reims range and damage are quite good. Slapping CW on Reim allows you to spam skills more which in turn grants you better Fortified health.

His slow/root/stun chain offers tremendous CC for his team.

The difference between reim and Baptiste is that Baptiste doesnt suffer from a bug that prevents him from having sustain.

Reim isnt good, just because some people play him well doesn’t fill the hole of that the majority has a problem with him.

The meta imo is mobility and sustain. Kensei can ultimately defeat Reim before he ever gains his FH and Kensei has enough mobility to dodge his Spires and B out of his Chill winds.

i just got him in battle royal against bf and taka , man i struggled a lot even with having my epic talent which makes his fortified health stay longer , but he is very slow at generating it , so useless .