The team released a news update for the game and while I don’t really play it at all (I’m mainly just hanging on to my account bc it’s pretty good pull-wise), it kinda has me excited.

For those that don’t wanna watch, in short, they announced an event to get Giovanni and Mewtwo (f2p as well), the next banner is Grimsley with a 300 gem daily login bonus for his banner, there’s going to be a Christmas Rosa and Siebold banner, Lance and Cynthia ( @RiseChu) are coming soon, and there’s a free 1500 gem gift tomorrow.
I’m definitely saving for Christmas Rosa.

I would love to return but has there been any QoL changes?

Though Cynthia is waifu soo…

There has been a few QoL changes like an additional difficulty to all the farming stages to shorten the grind and evolution materials being slightly more common to account for new ones (like Brendan’s). They’ve been holding quite a few events so the F2P gem income has been pretty decent lately, which is nice. There certainly is a little bit more activity in terms of content as well, especially with the plans they have for the future.

Bleh, not enough for me to want to play it again. The game became very boring, very fast. A bummer, as I was looking forward to the game.

Hmmm. I see Cynthia but…

My hunt for Cleo in Dragalia hasn’t been a success so far, but my hunt for Rosa was a complete success from my very first multi, even if I don’t care too much for the game (I didn’t even grind out for Mewtwo)! 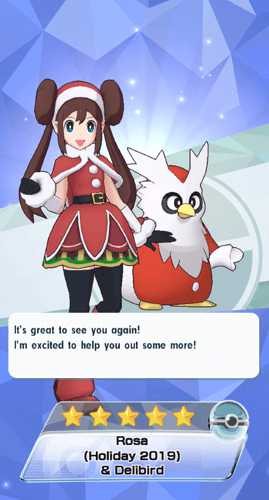 The new update yesterday made the game somewhat better, but the QoL changes are good. They added an extra set of missions through bingo cards, one of which resets weekly. Rewards for the weekly bingo card are okay (and you can choose which card you get), but you can get a ton of gems off the regular ones (3000 from clearing the first two each). Besides that, co-op battles are slightly faster, grinds are faster bc they reduced the number of daily supercourse clears to a max of 1 from 3 but tripled the rewards, and they also added in small, character-based cutscenes for 5* pulls. A special map is available today only that rewards you with 1k gems too.
Also they announced the next content update and Cynthia is finally coming in the next banner @RiseChu if you still care. It should start the 1st right after the Christmas banners end.