Vainglory has so much potential, the heroes design, the mechanics, the control, the graphics… it’s just beautiful. Sadly this game is being killed by its own devs, i am not that type of person with that white knight attitude and say that things are not that bad because they are, veteran players are leaving at an alarming rate and while there is a good influx of a new players that’s not what will keep this game alive. The high elo community is such an important asset, that’s where most of the content creation comes from, the youtube videos, the twitch livestreams, without out it viewership just drops out massively. Right now there is probably 5 high elo streams who stream regularly on twitch and by that i mean at least once or twice a week, those i can recall are L3oN, Xenotek, Hundor, Maxman and Bayu. There is probably a couple that slipped out of my mind but it doesn’t matter because there is a list of streamers who just don’t stream vainglory at all anymore including Flashx, Chuck, Gabevizzle, StartingAllOver, Hami, Thruth, Starboi, Maxgreen, Zio, Creation, T4SA, Seule… the list goes on.


So content creation is clearly dying, there is no denying that the facts speak for themselves and here is why:

Those issues have been there since the beginning and i am confident they’re here to stay for a long time i just don’t see any sign of them improving. Most of the problems are not even acknowledged by semc when being reported, they just throw silly excuses instead of working on a fix. The only thing i will give them credit for is trying to fix the meta even though they got it wrong at least they’re trying but spawn and respawn timers won’t change much, as long as ambient has so much impact on making the carries fed, junglers won’t get to farm their blue side jungle and top lane will be camped and mid lane will be won at level 1 or on the next rotation because they secured both blue jungles.

sorry in advance for the typos

This would be a really good post, but you forgot one important element:
How do you suggest SEMC fixes these problems?

Also, the meta is going to change next patch, mainly because the spawn timers are changed. Can’t say for sure though.

Couldnt have said It better, i hope they fix at least some of the issues.

At this point they need to explain themselves why they haven’t fix the bugs(some of it is months-years old of bugs?)

Amd They should really push this game to casuals i.e ads everywhere(lets face it VG is great an all but we need masses ) this is such a masterpiece for a mobile game yet it’s overshadowed by ripoffs with bright colors…

Also follow up question…
We’ve seen people leave SEMC. Does new people fill in on that role? Is SEMC hiring people? Why are they still(they say) a small crew cant they hire new people?

T4SA was streaming the other day. Gabevizzle couple weeks ago? But I do get your point. There is no motivation anymore.

Most streamers have lost their drive / passion for Vainglory.
Mango was on for a bit as well.

Just wanted to point out that it’s not completely dead… YET.
Streamers still stream VG every once in a while.

WIth VG, I see NOTHING but potential, and here we are…at nothing.
To the devs:
•Heroes need to be more creatively designed, just don’t think about how “OP” a design might sound, create it first- then balance. Hero like Kinetic should’ve abilities that can resurrect destroyed towers, set traps, create a slow zone for eg. Instead, she’s just a rip-off of Ringo’s A, B and Ult…

•Matchmaker needs to be fixed, enough said…I don’t know what’s the exact problem so I just leave it at that.

•The UI should be simplified MUCH MORE. Try to combine Party Tab into The Social Tab one or as a part of the Game Mode interface. Get rid of the Trophy section in the Player’s info, unify 3v3 and 5v5 tank into 1. Opal and ICE deal needs to be removed, don’t we already have an in app currency purchase store? This is just to name a few. Simple. Polish. Perfect the UI, it’s the first thing a player sees.

•Fix the Meta. God. Are tanks heroes damage takers? Or damage dealers? I didn’t know a tank can also be an assasin. Fortress, Grumpjaw, Tony, Grace, why are they so strong at sustaining why also have the ability to carry? Why such a strong synergy to both roles? Pick a role. Heroes needs to be item dependent. In no way should a Grace with a Sorrowblade and a Tyrant’s Monacle be able to heal herself from dead-ish to 50%. The meta shouldn’t be around pro-sustain. And also the mobility meta…why does every meta heroes have got to have a preselected/targeted (you name it) DASH?

I will stop here. For now. Because I’m tired. The game ain’t gonna fix itself. So if you can’t fix it. Don’t break it even more.

The constant di-sync its like you’re fighting an invisible force that keeps sucking in your character against your will, it’s awful.

This would be a really good post, but you forgot one important element:
How do you suggest SEMC fixes these problems?

Some things can’t be fixed. They spent resources on a 3v3 mode for 3.5 years before rolling 5v5. They lost momentum/time which is not a recoverable resource. They should have rolled 5v5 in late 2016. They also made a massive investment in esports focused on 3v3 just as they were going to transition to 5v5 only to gut that investment. It wasn’t a bad idea but it was the wrong mode at the wrong time. If you only have enough cash for a one time investment, you spend it on the right thing. Vulgarish Explanation:

Basically SEMC had 3v3 and 5v5 really to go and prematurely spent their one resource on the ugly 3v3 mode when 5v5 mode was patiently waiting their turn. Now SEMC is spent, 5v5 is upset, and 3v3 is still ugly.

What I love about your post is it is about facts and personal observations.

This is a quality complaint post. It deserves no salt mine treatment.

If only we as a whole could present problems like this more.

I dont agree about 3v3 being ugly, its still the main mode for a big part of the playerbase (there are the same number of 3v3 matches being played as 5v5 ones).

(there are the same number of 3v3 matches being played as 5v5 ones).

How do you know this to be true? It’s certainly not my impression from the API data I’ve seen.

Doesn’t the API data only collect data when players search for specific games?

Also same amount of games would mean 5v5 is being playedore because the required players per match is 4 higher.

So there are more people playing 5v5 if the numbers are somewhat even. Even more 3v3 could still mean 5v5 is played more…

I found It idk where, if i find It again i will send It

Yes, but means 3v3 is played by a big enough portion of the playerbase to be ignored.

Doesn’t the API data only collect data when players search for specific games?

No – every match played (with just a few exceptions: bot matches, certain private matches) is delivered to the API servers. All matches are available through the API for 4 months.

What you might be thinking of is the fact that API sites (and tools like Andi) only gather data on players they specifically retrieve from the API when someone searches for a particular match or player, for instance. So while the API itself is a complete picture of what’s happening in VG, any given site or tool has a very incomplete picture. In addition, 3rd party API devs are prohibited from attempting to get a more complete database and from keeping the data longer than the 4 month retention period SEMC specifies.

The lack of a way to get a set of truly random matches from the API is very frustrating for those of us who would like to do statistical analysis.

Also same amount of games would mean 5v5 is being playedore because the required players per match is 4 higher.

So there are more people playing 5v5 if the numbers are somewhat even. Even more 3v3 could still mean 5v5 is played more… 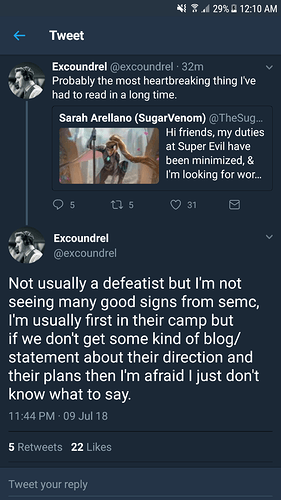 Screenshot_20180710-001056.png1080×1920 340 KB
This tweets sums up my point, the community is just worried because there is no sign of improvement from semc, no sign of solving the current issues and more issues seem to be added to the current list the more times passes. Excoundrel was reacting to sugarvenom losing her job at semc and you know its bad when he has no words
5 Likes
SideRaiderr July 9, 2018, 9:56pm #18

At it’s core, 3v3 is the inferior mode. It come’s from the many patches where:

But the Fold is beautiful and I wish SEMC would bring some of that beauty to the Rise.

SugarVenom, too? I wasn’t very interested in the e-sports scene myself, so lay-offs in that department mostly came to people who didn’t have a huge impact on my enjoyment of the game…
But SugarVenom helped shape and formulate the world that many of us felt attracted to. Between her and the e-sports staff and casters, SEMC managed to terminate just about everyone responsible for creating what people first fell in love with about the game, before even playing it.