Mar’kell uses the powers of illusion and misdirection to confuse his opponents creating opportunities for his team to surprise, ambush, and pick off enemies. You can choose to build support items and take the Roam position for your team, or you can build CP to increase duration and effectiveness of his abilities while taking the roll of lane or jungle.

Mar’kells appearance is incredibly similar to this image below of Harry Houdini. He wears an old timey suit with the sleeves rolled up and just as in this photo, has his wrists shackled. 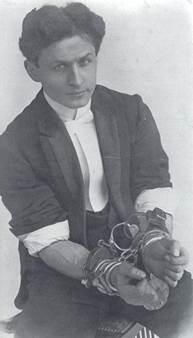 Mar’kell is incredibly hard to nail down and thanks to his always confusing illusion tricks all incoming damage is reduced by 7%. It’s a wonder you’re able to hit him at all.

A ability: The Trifecta

Note- the ghost images are in a spread formation roughly the size of Ardan’s gauntlet. The way the ability activates is on the first tap a visual triangle appears around Mar’kell on the ground, and a second selection tap near one of the corners of the triangle is where the player is within the formation. Ghost images do no damage and the way you can tell they’re not the real ones is that upon taking damage their health bars do NOT get lower. Only the real Mar’kells health bar moves. Any movement Mar’kell makes is mimicked perfectly by the ghosts.

Mar’kell points his finger and emits of powerful beam of light. Target takes CP damage and is literally blinded. The target’s screen turns completely white for 1 second. The player can still move and use abilities, but simply cannot see the screen while doing so.

Notes- this is a skill shot, and can pass through lane minions. Blindness affects first hero the light collides with.

Mar’kell masks his entire team by visually switching all three members. All Hero abilities stay the same but every member of Mar’kell’s team appears as a different hero. During the duration of the ability the entire team has increased def and shield.

Notes: Say your team is Mar’kell, Rona and Vox. When his C ability is activated, the Vox visually turns into Mar’kell, The Rona Turns into Vox and Mar’kell turns into Rona. Again all their abilities and AA will still appear the same, so in this example you’d see Mar’kell throwing out Vox’s sound projectiles and resonance rings.

ALL FEEDBACK is welcome!

Just a note: I wanted save my hero creations by bringing them here.

Buhnjay
The idea behind this guy is he is the master of cooldowns. I have no numbers as of yet (as you can see) and I’m not sure if he should have some type of scaling built off of cooldown items. I think it could be a very different sort of Hero if so. I really need some help with numbers/ideas to ensure he isn’t OP/UP. I was thinking of making his movement speed even slower than Phinn because of the nature of his kit and design. Would LOVE any feedback on this!!

Buhnjay is a very old, very dark skinned man with a crooked back, bald head, and a waste length white beard. He wears robes of gold, with black trim, and has very slow movement speed. Buhnjay is able to manipulate space and time with his magic. He wields a scepter with a fairly large, illuminated hourglass at the end.

For each second Buhnjay is attacking enemies he gains stacks of “time sand”. Each stack increases his cooldown regeneration by X amount and his attack speed by X amount. When not attacking, Buhnjay loses 1 stack per second. Maximum X stacks.

Buhnjay teleports instantly in whatever direction he’s facing. If enemies are near Buhnjay at the place he teleports from, or to, they take X Crystal Damage and are slowed by 35% for .25 seconds.

Bunjay bends space at a target location. All those within the gravity well take X crystal damage and have their cooldowns increased on next use by X amount.

Grauk is a humanoid frog creature short in stature but very heavy. He has a green complexion; warts all over his body, spines along his and head and shoulders, and he has a small baby frog on his back named Tad. The artwork in the link below gives you strong idea of what he looks like. 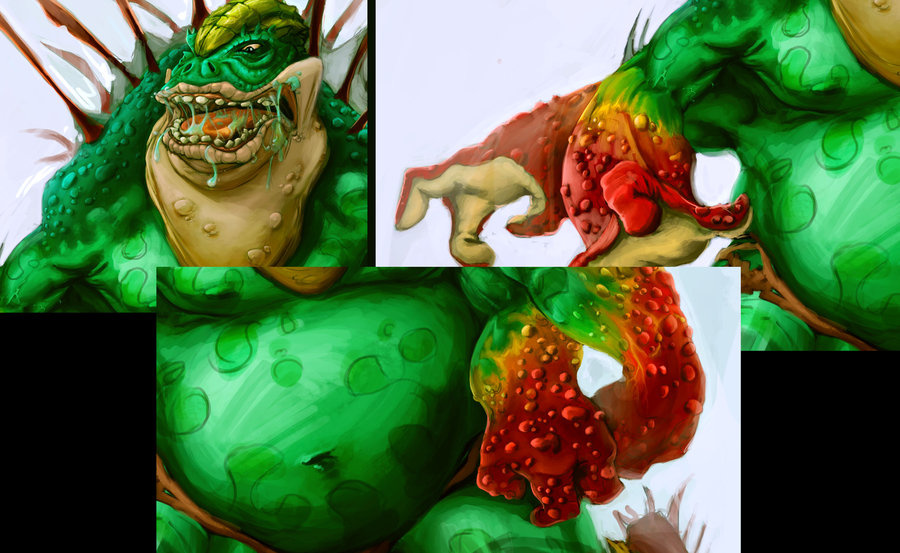 Heroic Perk: Poison Skin. Basic & ability attacks apply poison skin to target enemies. Each stack of poison skin does damage every second to target and if target reaches max of 7 stacks, target takes a burst of CP damage and all stacks are removed. Target cannot receive new stacks for 3 seconds if full stacks explode. Stacks Fall off after 2 seconds if new stacks are not applied.

Tongue lash- Grauk whips his tongue at an enemy which pulls him to his target. Enemy is slowed for 0.5 seconds and takes crystal damage. Tongue lash applies 2 stacks of poison skin.

Tornado Tongue- Grauk’s tongue whips around in a circle and does CP damage to all nearby enemy targets. If damaged enemies have Poison Skin debuff they are slowed for 1.0 seconds. Tornado Tongue applies 1 stack of poison skin, refreshing existing stacks.

Release the Frog!-Grauk yells, and his baby frog Tad jumps down of his back and enters the battle, targeting the closest enemy hero. If no heroes are present, Tad will stay stationary for 5 seconds granting vision for the duration. Tad is immune to damage and CC for the first 1.5 seconds upon release. Tad’s damage and health are based on a percent of the total CP Grauk has and the longer he lives the more it scales. If Tad is not killed within 5 seconds of combat he tires and returns to Grauk’s back. Tad’s attacks apply poison skin.

What do you guys think?

Surge is a very large muscular dark skinned man. He appears all but naked for the exception of a small cloth around his waist. His entire body’s skin is brandished by blue lighting streaks that glow brightly when he uses his electrical powers. His eyes glow crystal blue. He head and body are hairless and he is incredibly muscular.

A ablity: Electric Aura (visually is a belt of electricity that circles his waste, and then when triggered it sends a lightning bolt to attacker)

When Surge takes damage while Electric Aura is active, the source of damage receives a burst of electrical damage. The aura has 5 charges before it’s dissipates and goes on cooldown. Damage taken from Electric Aura applies magnetism stacks on enemies. Overdriving Electric Aura gives it 6 charges and dramatically increases the damage of each charge.

B ability: Thunderclap (visually Surge lifts his hands to the sky and is struck rapidly from above by 3 lightning bolts)

Surge channels for 1 second as all nearby targets take 3 pulses of electrical damage, each applying stacks of Magnetism: Overdriving Thunderclap adds a 4th pulse of damage and dramatically increases the damage of each pulse.

C ability: Overload (visually Surge’s entire body glows brightly with electrical power and then jets of lighting explode from his hands toward all nearby enemies)

Surge channels for 1.5 Seconds and then all nearby enemies take electrical damage. The damage occurs over 3 seconds with 1 tick of damage per .5 second. Enemies hit by overload are slowed to 100% move speed. Surge can move after channeling but is capped at 80% move speed.

Any and all feedback is VERY WELCOME. Thanks for reading guys