My disasterous experience after a year

Hello there! I used to be a hardcore Vainglory fan, actively playing with 2 accounts, one of which is POA gold and the other Hotness Silver (Before the season reset). I have spent over 90 USD in the game, just to get the Skaarf Golden sparkler skin of which I am starting to regret now. I left Vainglory for about a year and recently started playing again upon the release of the 5v5. Here is my experience of the game after my first few ranked matches.
I will try to keep salt to a minimum, but I am boiling under my skin as I am typing this.

Poor Communication.
Of course, the vainglory developers are once again oblivious to the imperative needs of the players. I see they have added some short phrases, a really pathetic attempt to resolve this lingering issue (I laughed at it for about 10 minutes straight) xD. Communication is of paramount importance in any moba game, and it is insufficient in vainglory. More advanced and skilled players need a proper chat system, to convey messages such as “Spread out enemy crystal vox!” or “Koshka Pouncy Fun Saw and use Atlas Pauldron!”, of which the current system fail to do. How much better would it be to have an actual chat system! Players would actually discuss game plans instead of pulling their hair out during respawn times!
Oh wait the developers are afraid of vulgarities, nevermind lets just discard this great addition which would make the game a lot better.

Come on the masses know that there is an abundance of afkers in Vainglory. I don’t care if you do not deduct my rank rating, you just wasted 25 minutes of my life! At least give us some dumb chest to pretend to care for us. Once again, another pertinent issue oblivious to the eyes of the developers.

Weapon skaarfs and crystal shank saws, I had enough! I heard a 16 year old boy in Singapore recently committed suicide. I also heard that he played a Vainglory Match before he jumped.

I know that the developers know the days aren’t looking good for Vainglory anymore, if it is not elucidated clearly enough in the way they try to elicit cash from addicted players. (Golden ticket for 5v5!) They are just trying to squeeze out every bit of cash they can earn from the decreasing player base before the game dies, I completely understand. I know I will never see the implementation of said suggestions, but I needed to let those words out anyways. With that said, Thanks For Reading!!

Just letting you know I moved this to the salt mine - for kinda obvious reasons.

I do agree better communication is important. I think text chat is very needed for draft to discuss good picks. Are you playing VG on low? If your phone is melting on low then you must have a fossil lol. SEMC cannot do much except exempt your elo loss if someone AFKs. That person will get LPQ and if they keep AFKing even in cas then LPQ gets very harsh, even at the second offense. Player picks are also out of SEMC control. What if that player just wanted to play WP Skaarf in cas? CP SAW is actually good tho too.

First, you can change graphic settings.

Second, if “advanced” players need chat to relay Saw needs to be atlased, or not to bunch up against Vox, they are in fact scrubs. Both is self-evident.

And with the exception of late-game deaths, you never have enough time to type an actual message in the first place. You would be wasting time that should be used for gold gain, or to exact pressure.

bro android has an option for the graphic quality settings

Yes but I am talking about ranked. Tbh I don’t care if they troll all they want in cas(I have done it before), but in ranked? That’s a no no. Let me put it this way. You are at POA Gold and literally one game away from Vainglorious and your teammate goes all Shatterglass Saw or Tornado Trigger Skaarf. How would you feel? Exactly. And no CP Saw is not good in ranked its basically a troll lol wtf.

And about the afk thing in ranked, its clear SEMC can do something about it. If one player in your team decides to afk, then it only make sense for the other players in the team to be able to quit without getting punished. Countless times I have been in situations where I am forced to play a one sided game with an afk teammate. A god damn waste of my time, knowing that I would lose anyways.

Thats the point lol. It is only late in the game when you would have to have proper fights as a team. A crystal vox wouldn’t be much of a threat in early game as like you said, players would be busy farming instead of grouping up together for fights. So I don’t get your argument here.

Next,
I don’t see how by me asking the team to improve in their fighting style against a crystal vox, or a saw, I would be a scrub. Ultimately all we want to do is to win the game, so please enlighten me. 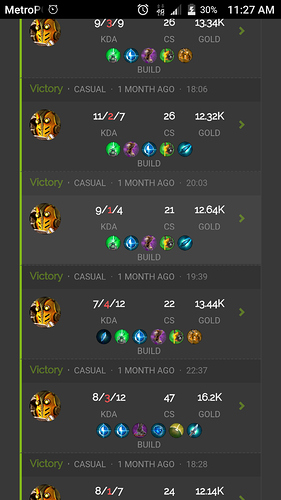 If you check api sites like Vainsocial you will see that SAW has one of the higher winrates at the moment - and he is mostly being built as CP SAW especially in higher tier play. Its not a troll pick.

You can turn down the quality of the game…
Yes, 5v5 matchmaker is bad, they have said many times that they are improving it…
Somebody who kills themselves over a video game is stupid, there must have been another reason…

Some people like me refuse to surrender after an afk, because after ive been fed enough, I can manage to do a 1v2.
I dont troll, I only prefer to double carry or double jungle if I somehow get matched with a party 1 whole tier below me forcing the carry and jungle role.

You want in game chat? Join a guilds use discord, i for one don’t want to h e to listen to a bunch of whiny teenagers talking about losing their virginity’s toneach others mum.

The only comment worth noting is AFK, it is annoying, then again if you form a team it’s unlikley to be an issue.

Before you ask, I strictly soloq, I play at POA level and 5v5 matches me with people of that tier. As your new back your MMR will have reduced so it’s fairly obvious why your matching with low tier players.

You’re a cancer on the game then, forcing people to 2v3 simply isn’t possible in 3v3 at higher tiers, and it’s clearly noticeable in 5v5 when you’ve lost a player.

Making me carry on and waste another 10/15 minutes of my time sucks. Shame on you…

Ive never forced you to carry on, you could of course, opt to afk too if you wish not to waste your time.
2v3 is certainly possible, its a matter of wheter or not you are able to scale faster than the enemy.

im pretty sure nobody would really commit suicide over a video game. i mean, you’ve got CoC fanboys spending over 100 dollars from their parents on the game, but still.

also isn’t afk forgiveness a thing? or did it get abused so much that the devs went “lol nah”?

No it isn’t, at higher tiers you can’t 2v3; the enemy will notice and abuse the advantage. Jungle bugler AFK? They’ll feed in your jungle and scale faster, laner gone the same…

Your wasting people’s time 2v3; 5 people being forced to play on because you think you can win when clearly you can’t. It’s just another example of toxicity, forcing someone to afk because you won’t to be a hero!!

If thats the case I personally can tell which games I will win or lose based on the draft alone, might as well just afk from the start, amirite?

Draft clearly matters, what skill tier are you 2v3 in and winning?

Up to POA Silver, with a few cases at poa gold.

Alright sorry for the confusion, let me elaborate on the situation further. Heres an example, your are playing in ranked as Lyra, you have a saw and a skaarf with you. 2 laners, but everything’s still fine. But then, halfway through the god damn game, the saw decides to switch to a CP build, forcing skaarf to go weapon. Now do you understand what I mean?

And bruh you are clearly not in a rank tier as high as POA. If you can 2v3 and still win games, you should go play in some tournament or something