Looking to and through Alpha 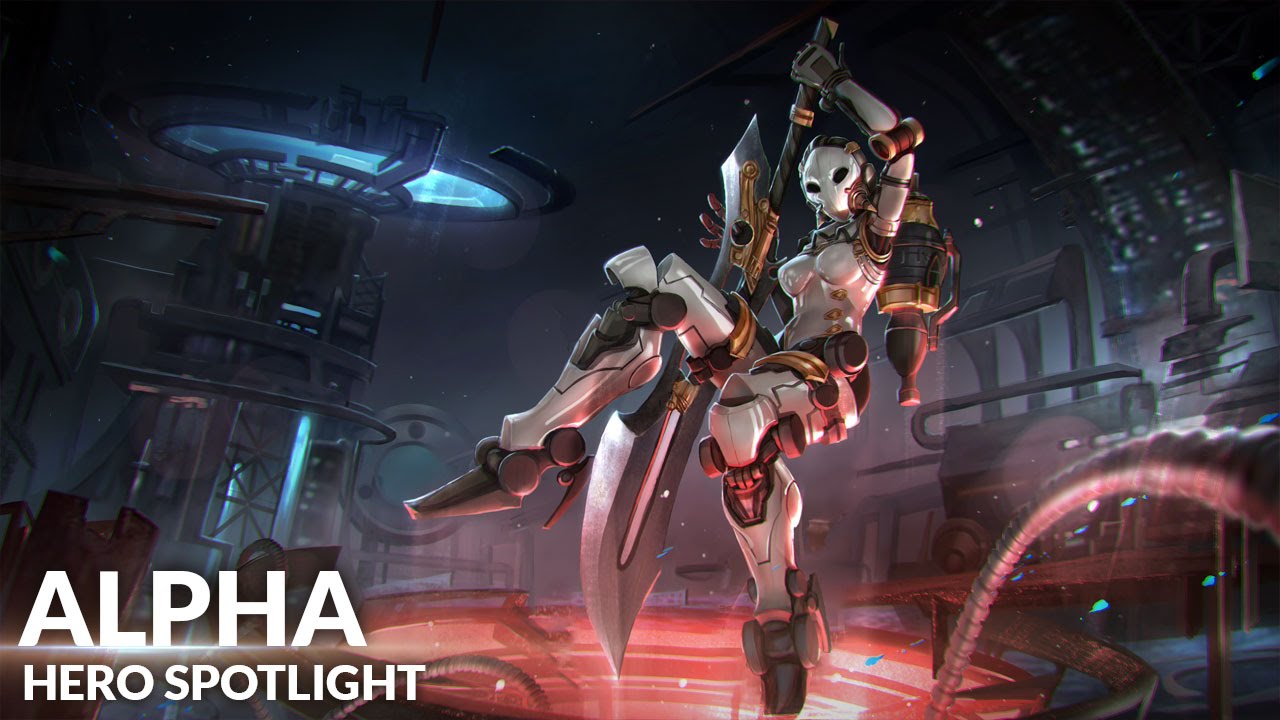 Alright so this is my second go at this and next up in line is alpha the undying robot. Let’s get this out of the way first. Alpha is a amazing soak up damage, diving, warrior. Whether you go cp or weapon as alpha you really don’t need to go glass cannon on her to get some of that serious punishing she can dish out. You can even play her as a tank because the stacks of damage her B can be overwhelming with just a AS alone. Lets get into what she first offers that no other hero yet has, a revive, kinda.

Alphas heroic perk is tied to her ult so keep that in mind too. When Alpha loses all of her health she will go into reboot mode. During this state she will get a barrier to soak up damage as she reboots but will be immobilized while rebooting. She will revive with 40% health and plus 65% of the max energy you get from your items. This means alpha has 3 health bar or 2.5. This also replaces her energy with instead of a blue line, a white line. Keep an eye, on this if the white line is brighter and more visible then your reboot is up and you can play more aggressive. Cool down items will allow alpha to reboot more often too because it is linked to her ult. So building cool down items can make her seem like she’s unkillable through out the game. But do be careful just because you have a lot of health and fall back doesn’t mean you’re are invincible. She can be killed during her reboot and even secured right before she fully reboots if the enemy decides to capitalize the moment. If you don’t have a team to help you while your down you could be way over your head.

Items That May Help

Halcyon Chargers is a great item to have. Weapon or Crystal the slight cool down they give can really help in the long run.
Journey Boots can be amazing too. Though they don’t help you with your reboot they can really help you with your aggression and diving, seeing as the boots cool down is lowered when you hit an enemy hero and they are the fastest boots in the game.
AfterShock Not only for the damage but the cool down can also give you a slight boost. You should only build this on her Crystal path though or if you decide to tank.
StormCrown Its not a personal fav to build but I do see it sometimes work on CP alphas and tanks too. It gives you cool down and some nice true damage to jungle with and take objectives. Plus it makes you tankier so thats a plus but the damage overall to heroes is meh so build if you think you need to rotate faster.

Her A is a like a dash if you scan them. In a straight line you will scan the floor and the first enemy you scan you will dash behind and deal some damage. With 3 stacks from her B you can even do more damage. This ability also does AOE damage and slows whoever it hits. The overdrive is that its range will increase. Its a great way to engage, flank, or catch up to fleeing enemies. Here’s the tricky part of it, depending on what you are going will change the way you use this a little, just a little. With CP the base damage will be increased by 180% instead of the weapons 80%. But the stacks for weapon are better then CP’s as the weapon percent ratio is 40% while cp 30%. This means if you want to charge as a CP without stacks yet, you’re free to do that because you’ll still do some major damage(with the stacks being the icing on the cake) but as weapon its more emphasized that you get those stacks before fighting. You still do decent damage with your A but with the stacks you could end a lot more then just going straight in as weapon. Try to look for a engage if you can get one and if you feel confident you will win while playing weapon. When you those 3 stacks weapon or cp it’ll make quite the impression on them when you jump in.

I give you items that may help but since this is a skill shot and more of a engage and a catch up any damage item will help you as long as you hit those laser beams.

Her B is like a empowered basic attack with some added cp damage. Every time alpha uses this ability she will gain a stack for her A and her B. She will also gain some healing per stack. Each one of these stacks will increase this abilities damage by 12% and 18% if you overdrive it. Basic attacks also reduce the cool down on this ability by 1 second and 1.2 seconds if overdrived. Alpha uses 2% of her health every time she uses this ability This by far is where alpha gets her main damage from. Since it counts as a basic empowered basic attack ability all basic attack items will be used upon this ability. AKA AS is used on the ability not the next basic attack that comes after it. This ability is huge on weapon with the healing increasing by 3% for weapon power. 110% for the base damage compared to CP being 100%. The damage overall doesn’t seem like a big difference but as weapon alpha you can sustain more making you much harder to kill in the middle of a fight. I overdrive this first to get the most damage out of it as quick as possible. This is per stack too 18% damage increase per stack, 13 healing+3% weapon power per stack. # stacks and she’s hitting very hard. But keep in mind too that you use a bit of your health every time you use this ability. So spamming it can lead to you being at a disadvantage over time.

Items That May Help

AfterShock this does 14% as CP damage and pared with her B she can do some nasty damage and quickly. That 14% has a cool down but for the most part it’ll be up every time you use your ability. If you’re playing CP I highly recommend this item.
Dragons Eye can be very useful if fights are tending to go for a long time and where alpha can stay in a fight for awhile Dragon Eye compliments her nicely. Because it is damage to increase stacks on Dragons Eye you don’t even need to use your B until a more favorable target comes by.
Broken Myth is good for the burst part of alpha. I typically build AS BM and SG for burst alpha. The 30% shield bypass is amazing with her and with a 54% max total damage buff can do unreal ganking damage.
Shatter Glass though just bass damage increase its amazing on bursty heroes. I like to do as much damage as possible and try to keep alive and SG SB really let me do that with a few combos of other items. Though its up to you to experiment on what item combos work best for you.
Tension Bow is a broken weapon item atm and with how alpha’s B works she might hit the hardest with Tension Bow as a bursty weapon alpha.
Sorrow Blade is kinda in the same boat as SG just a huge base damage boost and increases that sustain too for your B.
Posion Shiv I get this for the heal and the attack speed, you can get a serpents mask but I really prefer the attack speed you get over serpents and alpha already has high sustain.
Tornado and Tyrants I put these together because that is what I usually see. I don’t build these unless I’m going bursty alpha because it sacrifices a lot of the defenses I could get it. They can do crazy damage but you die much sooner in return.
Shiver Steel ever since this item got a attack speed I’ve been using it on alpha as part of my sustain combo. keep that carry close and rack up damage fast and the health is very welcomed.

KABOOM alpha suddenly grans a slight movement buff that quickly turns into a slow until she unleashes her mad furry and makes anyone within her circle drown. This does major damage with or without cp and makes her go into reboot right away after the explosion. This can do major damage yes but you have to use it wisely. For that huge damage you’ll be immobilized right away and they could always end up running from you. Stay close to them use you A and B to stick on them. Another tip is try and pop this right before you go into reboot so that you’ll get a little extra time on the battle field and let off a huge explosion before going down. It only scales with CP but I also tend to max this out on weapon to get that reboot up more often. Might as well go out with a bang.

If you’re going CP any CP item will give you quite the buff on damage for this so go for items that maximize your B’s damage and your ult will still hit very hard.

Well thats Alpha and how I See her currently and how I build and seen others build her. What do you guys think? I miss anything or get anything wrong? How about that Weapon Alpha nerf how about that? Please dont forget to comment ;3

There isn’t nearly enough comedy on these forums, thanks a lot! Have a like.

@LudicrousGaming sorry got to agree.
You have a giant wall of text but Alpha is far from balanced. She is a priority ban in rank and will be heavily nerfed upcoming patch.

Agreed with above - she is most definitely not balanced

However, pretty good analysis and look forward to the next

I checked the ban rate and she has a 12% third highest in the game current 3.0 patch so I see what you mean. I think her. scaling needs to be fixed, for being able to survive so much punishment she can dish out way more in return. Her B stack can boost her B’s damage by 54% total. So I can see why she’s banned so much. I try to do these off of what I see and how I experience the hero so if it seems off as of now thats my bad. Her survivability has been toned down next patch with her reboot not giving her as much health back and her healing being slightly reduced so itll be interesting.

Your main and tips on playing them