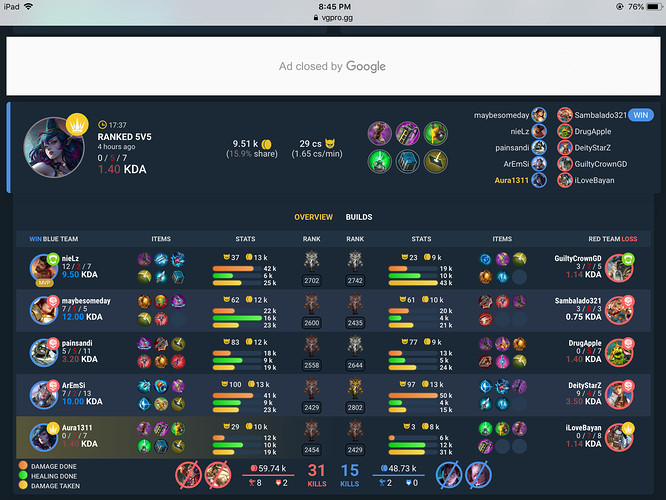 F9C9C8A0-8DF5-42AD-9FBA-80B00F691361.jpg2048×1536 767 KB
I just somehow won against a trio Q vg golds, those 3-4 man rotations to our CP buff were tryharding af it feels like a competitive game. Luckily I met them before and was familiar with their rotations, I was able to steal red buffs and gold treants sneakily (sorry Grace and Varya, I pretty much abandoned them in lane - but it worked out since somehow I had higher level than Reim at the end lol)
Thank god that Petal was trolling, it was a miracle that my team won that game. CP Kestrel in pro hands is stupidly irritating to face against, she was SO FED no one could pin her down and she was even able to 1v3 (Varya, me and Grace face tank the whole time and she managed to kill me - I even poped ult for myself urgh) and had a penta that game. I checked on vgpro and 4 of them except Ardan have like 70%+ win rate, and that Reim had had 100% win rate as Reim till he lost that game. Thanks Reza and Varya for the carry, my heart was all pumping the entire match like it’s a race between which team secure camps better.
Ve3nNo0wM June 13, 2018, 12:18am #2

interesting outcome. On paper it does look like your team dominated the whole match, with the vast majority of the kills, 8 turrets and 2 dragons - against their 2 turrets

Just goes to show how big a difference 1 troll makes.