I haven’t had a chance to properly play in some time, and, I really want to know how everyone feels about Inara, gameplay wise.

Pretty fun character actually. I love her jump feature on her perk and B.

Except her A… that damage for such a big area isnt fun.

Fun but sucks unlike Silvernail. Being able to jump from treant to treant with easy escape feels good. Or well she’s probably like that considering I don’t actually own her…

I barely seen this chick. I don’t play much tbh because matches are so aggrivating but still.

I find Inara ok to play as, with and against.

Her key strength when in the jungle is her passive that lets her move around very quickly and efficiently.

She is a bit of a slow clearer compared to some other heroes though, particularly for 5v5.
She’s pretty nuts in 3v3 despite the lower Treant count.

Her key strength elsewhere on the map is her speed boost ult. This can catch almost any team off guard and enables everyone to dive together. Pair that up with Fortress and there’s almost no escape.

The easiest part of her kit to whiff is her B. You can count on displacing enemies at the wrong time and direction when the player using her is new to her.

In my experience (Blitz and Battle Royale), Inara is strong early and decent late.
She is another hero designed for team work rather than 1v1 match up though she’s ok if she has to do it.

WP is the easiest to use thanks to the current meta, while CP is harder, more of a small and regular burst, and more utility focused around her ult (by getting max cool down reduction with Aftershock and Clockwork).

Take it as you will I suppose.

Unrelated, but here’s some good shots of Inara, lol.

She has a really fun kit, but I think she’s not quite there yet.

She is stupid fast, but her damage falls off late game. If she’s on a good team, then she can shift to more of a utility role (not like a full-on support, but she can’t just be a damage dealer).

Her kick is really useful, but any amount of latency makes it screwy. Since you need to be very close to use it, and your enemy will be trying very hard to avoid you, they are often .3 sec away from where it looks like they are on your screen, and it often misses someone it looked like it should hit.

Her CP build is junk at killing jungle monsters, because the cooldown on her A is relatively long., and her base damage is low.

Right now, it’s her utility which redeems her, but you need to be on a good team to take advantage.

GOOD frickin LUCK in BR lol
She was definitely designed as a jungler.

Just played her in BR. Literally the most useless character

That or I’m bad

I have yet to meet a good Inara player which I understand that people are buying her and wanting to try her out but don’t hold the team back because you’re experimenting ( . •́ _ʖ •̀ . )

How do you suggest anyone get good with her, then?

Tbf, she feels like she needs to dash, but can’t. If her A and B were switched, maybe she’d feel better.

Shes fast, but uh that’s honestly it. She’s just fast. Not enough opportunities to do damage, except with her ult. Maybe good as cp?

I’ve been in some really good matches with her today. Several with around 15 assists.

Basically, I’m not treating her like a damage dealer anymore. Her speed lets her pick her fights (short of getting caught in a 1v3 and getting chain CCed, she can run from almost anything), and she should generally only get into fights when she has backup. When she’s alone, her job is to steal farm from the enemy. In a team, her damage helps, but mostly she peels, respositions the enemy, and slows the enemy. Her damage isn’t nothing, but she is not a solo killer.

1v1, she can take assassins, snipers, and mages. Against those classes her damage is enough, and her mobility and control of their mobility helps kill them. She needs to build defenses fairly early and upgrade them before she needs them. On the plus side, she can build two defenses (usually SH and Aegis) and still do adequate damage.

1v1, she should run from brawlers and tanks. She can help against them in a team fight (and if one person on a team needs to build Poison Shiv or Bonesaw, she’s a good one for it), but she can very rarely beat a Krul, Alpha, Tony, etc. who are focused on fighting her.

A big change in my success with her is that I’m really using her A for its slow. It’s longer range than regular melee, and can even reach Flicker without getting caught by him. The pattern is to slow and kite until the A cools down, then do it again, and wait until the enemy is weakened to really commit.

WP is actually way better than cp for her (and most heroes) right now. You hardly lose any ratios so I don’t really see the point of CP.

She really good as WP…dunno maybe it was just me 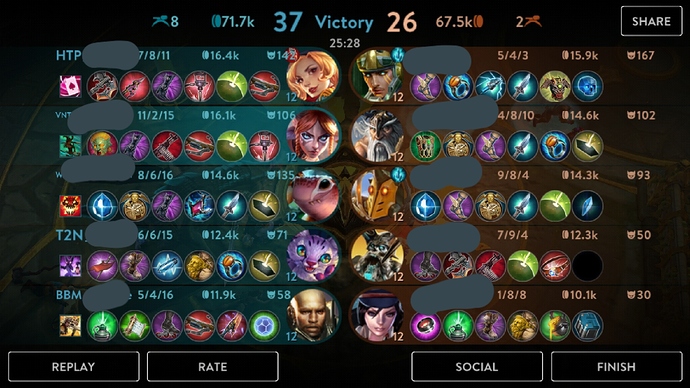 They weren’t targeting you, from the looks of that. Not saying that Inara is bad (or that you didn’t play well), just that your build looks like the enemy was just confused by your movement and wasn’t targeting you.

I ran against a team the other night that all built shiversteel. All. Of. Them. It counters her pretty hard, since her mobility comes mostly from raw speed. Why they all decided that countering Inara was job #1? I dont know. I ended up building her full tank/utility because every time i showed up they were on me like seagulls on a half-eaten hotdog, meaning that as long as I stayed alive the rest of my team could go full-attack.

So I’ve been playing Inara a lot, and she’s got a really, really fun kit. She needs just a bit of fine tuning, IMO. Her utility makes her low-ish damage tolerable, but she needs a few quality of life tweaks.

Most of it is not underpowered/overpowered stuff, it s just the kit not feeling quite right.

1 and 6 could not be addressed by adding an empowered CP effect to her first basic attack when she dashes to a marked target. It wouldn’t need to be very strong, just a bit to help with farming, and help her trade damage with other junglers in the early game. If Inara builds CP, it might keep its usefulness into late game, but for WP builds the raw WP damage would outshine it.

2 should be addressed by just letting her dash to marked targets regardless of range.

3 could be addressed by making her wisps last 5 seconds.

If she is changed so she can’t be invaded early and clears fast - she will be the most OP jungler in the game by far. You can’t create a hero that does not have weakness in his kit/mechanics (or atleast you should not).