How will semc exactly implement this system into the game. I mean a pro adagio (or any hero) player starts at level 1 mastery stat,this obviously provides false info on the skill level of that player on that particular hero and will there be better way to show off your mastery emote just like in league of legends ? If so that would be really awesome IMO. What you guys think…

Dear SEMC, please, please, PLEASE, P L E A S E… Do NOT mix any pay-to-win aspect with the hero progression system, like you did with “clutch” talent chests. Let it be ENTIRELY free, let the skill alone decide player’s worth and potential rewards. I beg…

how would they make it so you have to pay?

Color me skeptical about this … I’ve been utterly unimpressed with the level of effort SEMC has put into any of the game’s out-of-match features in the last two years. There are so many things that have needed fixing for so long – some of which are just so BASIC, like chat or anything to do with guilds – that the chance of them adding a useful and rewarding mastery system (which ideally would involve measuring a player’s skill with each hero in order to earn said rewards) seems slight.

I’m expecting something pretty basic and unimaginative: how often someone plays a hero or something.

Everything associated with Guilds is basically broken beyond and beyond. It’s a meme lol

Possibilities are limitless. I can’t tell you because i dunno what the system is, but it’s really easy to exploit ANYTHING with micro transactions. Examples being Boosts if we assume it’s grinding.

Any actual gameplay should be in a moba’s especially

You are absolutely RIGHT. There is a very high chance that its not going to be a completely free progression system.

Color me skeptical about this. […] The chance of them adding a useful and rewarding mastery system (which ideally would involve measuring a player’s skill with each hero in order to earn said rewards) seems slight.

The issue is: There are a myriad of ways to get this wrong and ruin the core game (i.e. any effect on gameplay whatsoever - it would be talents 2.0 all over), and only one way to get it right.

And while yes, we lack a progression system, pouring a huge amount of resources into what amounts to displaying yet another badge…

I mean, here is how it could be useful: During hero select, display a visible border around the hero’s portrait, roughly indicating win-rate; possibly mixed with other statistical data, such as K/D/A.
You could give all sorts of visible queues, like:

That would perhaps give Saw insta-lockers a moment’s pause, too, because putting that deep brown shit-tier indicator on public display is a wee bit embarassing.
And it gives people who can work with off-meta picks a chance to reduce team-tilt during hero-select. (Though that does work in the other direction, too, obviously.)

So there’s a slim possibility of this being a worthwhile addition, but I wouldn’t count on it.

Can somebody post the source? Or is this just hopeful wishing?

r/vainglorygame - Sharing some of our 2018 direction + upcoming AMA!

That sounds intresting but id rather want to see those borders for the division the player is in and a mastery badge. Also a mastery emote to show off in the game would be nice

You know what you’ll probably get for your mastery? Talents. and Blueprint Chests. Same as almost every other reward in the game. It’s sad really.

just hope this is not an in game advantage…
it’s a recipe for disaster. (look at talents…)

Finally that season spent I lost trying to master Skye shall pay off… its a nice idea, be great to show up the crappy win rate of players in advance. That way I can rage long the from the get go the friend them after to flame…

I’m finding it very difficult to spot the part they mention hero mastery. 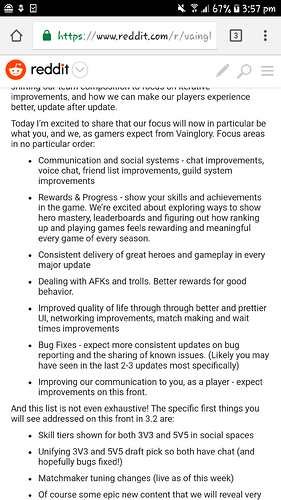 Are you sober or ringo lol

Sounds like some kind of rewards system to me. Achievements page, similar to the badge system of this forum. Leaderboard will be nice.