If i could change Petal

Just things i would change. I didnt put much thought into it so dont riot against my thoughts.

My Changes:
• Minions no longer give gold out. I would love this change because this would allow Petal to be played in her cp path in lane without feeding her enemy.
• Lower Petals base weapon power on her basic attack and have a crystal power applied to her basic attack with a low low low ratio. This would allow her to clear a little bit faster in jungle and lane if she decides to play cp.
• Minion health change. Period. They need to find a way to allow Petals minions not to die instantly from a Heliogenesis. Like really >_>
• A rework to her B as well. Ive seen past posts on multiple different sites that address the same thing. Her B doesnt really fit her kit. I also agree with this.
• Make petal a utility hero like Malene. Have her seeds have a healing aura with a low cp ratio.

My thoughts on ways to bring back petal to the lime light.

I dont care if none of these changes actually occur but i would like something to be changed for petal. A health buff barely does shit

i’ve seen Petal played well in 5v5 and 3v3. There are some seriously good Petal Mains out there.

Don’t ask me how. lol. I’m an average petal player. But petal has got MVP plenty of times.

ive seen petals play well as well, but she more situational. There are definitely better picks than her and even other junglers that can out damage her as well.

AoE is supposed to be her hard counter. I really dont understand the complains, she has a 50.65% WR, so she is not weak at all.

according to vgpro, she also has a pickrate of 6.3%, the third lowest of all.

she is WAY too situational in 5v5, with so many heroes, one is bound to have AoE, or at the very least, multiple heroes can easily clear minions one by one.

i think petal, while heavily situational, is fine. if i were to change her munion health, it’d be by making them have the same mechanic as fortress wolves (but then quick basic attacks counter her… so i guess more hits till death? 4-6 maybe?). but at least she performs well in those correct matchups, unlike reim who struggles against melee, who he was supposed to counter

Thats why you use her as a top lane split pusher. She can clear towers pretty decently and stay on them longer because of her minions. Her wave clear is good and she is anti gank because if you spam seeds everywhere the jungler is bound to step on them while they are dashing and stuff.

Overall, I agree, she needs a rework (again x3).
However, there’s a few problem.
Minion should still gives out gold and EXP as usual. But seeds needs to last longer and won’t disappear when Petal is far away.

Also, her WP ratio is fine, her Munions perk has already allowed her to incorporate CP into her basic attack. So no need for that.

I think we should change her into this “Necromancer” kind of hero. Her Perk should also spawn Munion Seeds on dead Minion/Jungle Monster and Heroes she killed. Her A would be an AoE activate that reveal her surrounding and let seeds (3) spawn near her, all of her seeds will last around 2/3 minute (if she overdrive her A). Her B would spawn Munions (OG Petal) while her Ult would trigger all of her seeds AND Munions to explode (kind of OG Petal). The Perk would also trigger ALL seeds to self-destruct when Petal dies. This way she can learn her B first, go jungle, spawn minion, while her A can let her provide vision on enemy jungle camps. Her Ult would also let her have a more significant power spike, as of right now, she has none.

I also wish her Ult and seed trampled explosion to leave a small poisonous cloud, instead of just instantaneous damage. Due to the fact that once her seed has explode, her hands is basically tied for the next 2 seconds.

Petal is one of the most unique and fun hero in VG, please don’t let her die!!!

You know what will make her a lot better?Make her munions invincible when her ult triggers and bring back her attack speed boost when she attacks with her munions like the old days.(I’ve played old Frostburn Petal back when she was pretty much the devil of vain,and I really missed it…)

her perk is when munions attack she gets bonus attack speed

Let me change up the sentence

It was removed during update 2.3,long long ago… 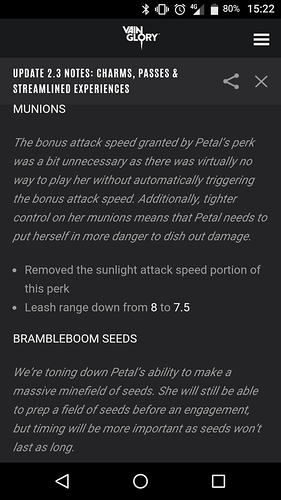 they should literally revert all those changes back to normal. As in 5v5, those being returned to her could might make her playable for everyone imo

wait so what is her perk now if they removed it

They made the seed turn into munions part of her A into her “new” passive,in short they completely removed her passive and never gave her something new.

this is the quality reworks i am looking for

Before she couldnt jump, sure, they deleted the passive, but gave her a new ability.

Actually before she could jump,but you need to be on top of one of your seed to do it,which also reminds me that allies use to be able to “eat” her seeds to heal up,and how her seeds used to last 45 seconds instead of 12(now),so you can basically set a minefield in a bush waiting for enemies without visions to walk in.