I heal more than my carries do dmg 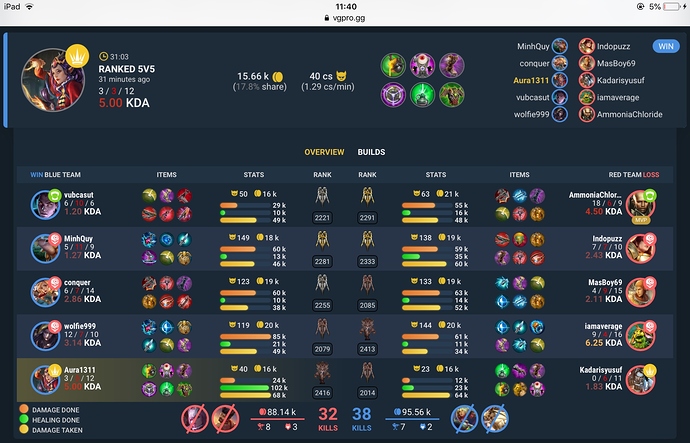 Not even a single Poison Shiv to counter you? thats just asking for a loss.

This is embarrassin. Seriously. lol. They don’t deserve those ranks.

You can’t really blame them. None of those heores can apply mortal wounds effectively. This is just a bad draft.

There’s 2 different items to apply mortal wounds. Vox can do it easily. Lance with that stupid AS? seriously? he already has WP bonus damage after his combat roll. He could’ve picked up a PS and wrecked.

SB, AS is a meta build for Lance.
You mean to build PS on Vox, it’s pretty meh imo. Cp Vox is also quite meh.
Even if Lance builds PS he can like reliably land it on 1-2 people. None of these heroes can consistently apply mortal wounds

but it doesn’t need to be consistent. it just needs to be a few seconds to make a difference.

There’s 2 different items to apply mortal wounds. Vox can do it easily. Lance with that stupid AS? seriously? he already has WP bonus damage after his combat roll. He could’ve picked up a PS and wrecked.

But AS on Lance is good? Building shiv on him is kinda throw. Vox is CP. Now why they had no mage or WP DPS hero is very questionable but going with what they have they can’t really get mortal wounds.

They ruined their win condition. By the looks of things, they had the upper hand, they had the damage output and made the plays, so all it took is for 1 player to sacrifice a little damage for mortal wounds instead and the outcome would’ve been different.

Vox can lay down mortal wounds like a mad man, had be built WP. You’re right though, not the most ideal draft.

Lance was 18/6 and MVP. If he built shiv he wouldn’t be even close. Grace isn’t a good choice either. Petel and Vox only have their ults to trigger it. Nobody could build it that game effectively. And looking at their comp they probably had the damage through survival and sustain not actual DPS. You can’t blame their win on lack of mortal wounds alone. Mid laner doesn’t have pierce. Doesn’t really have good damage. Lance, Grace and Petal are all more early heroes yet they had same damage. They couldn’t close out the game, it’s 30 min, fell off, lost.

Also that Ardan building Nullwave? to silence who? all those heroes don’t have any critical abilities.

well, you can’t blame the draft. that’s just how the chips fell. So, it’s down to player skill. items. objectives seem pretty even.

The only real control of anything that you have in the game is what items you choose and what lane you pick. Sometimes which Lane isn’t even a choice and you’re forced.

So if you can’t blame it on item choice. what can you blame it on? bad draft? that would mean they should’ve just said “ok, we sucked at the draft, lets just surrender”… it just doesn’t work that way.

Take the facts. Mortal Wounds is Lyra’s only counter to her insane healing. how else would you counter it?

Umm I actually said how they failed besides draft. Though that’s not to be underestimated. They have no mage and no WP carry. Aka they have no one to carry them. They have 3 tanks and 2 bad late game CP snipers. But ignoring that as I said they didn’t finish when they could. They obviously had early but didn’t finish. That’s their problem. Shiv isn’t a good item on Lance. If you have Baron and need mortal wounds would you build shiv on him? It still gives attack speed and lifesteal right? That doesn’t make it good on all heroes.

They could’ve flexed and made Grace the Captain and Cp or Wp Ardan can Tank for days while dishing out insane damage.

Vox is arguably the best late game hero ever. They focused down Kensei, which means they had coordination.

Or Grace could’ve went CP and Vox WP. Cp grace can heal 1800+ PER heal. with a CW, the CD makes her ULT up every team fight.

Either way, I think itemization is a legitimate way to counter any composition and also flex your heroes to suit the situation.

This isn’t competitive. This is soloq. Everybody does what they want and you can’t swap most of the time. You play with what you have. I never said counter building doesn’t work lol. I said their team comp isn’t very good lategame and they have no real carries with Vox being the closest. And I said none of them could build shiv in that game except for maybe Ardan but even then it’s not very standard (actually at all) and not that effectively as he can only apply it on 1 target while trying to help his team.
And also

Vox is arguably the best late game hero ever. They focused down Kensei, which means they had coordination.

I don’t play Vox, but I’ve always been under the impression that Vox has always been Meta and late game hero.

He’s meta, never took that away. I said he’s not late game hero. He’s decent but falls off. He spikes mid game as both WP and CP. But CP is just bad in most cases. His damage is way too low for a mid laner and he doesn’t really bring anything to be side laner. WP at least has BP so if he’s ahead his lategame can actually be good. CP Vox is really good in 3v3 though because of the closed spaces.

So wait are you suggesting wp vox mid or even petal mid?
They lost because of their bad draft and as Bobmax stated they coudn’t close out game and let it drag out till 30 minutes. Building items with mortal wounds would not help them since it last for only 2 seconds and they can’t effectively apply it consistently or effectively. Building mortal wounds would on these heores will only screw up their early game damage. All their enemies have much better lategames.