How do I actually report players?

This shit is ridiculously and shouldn’t have to go through this. I went support because they all wanted to go dps but then they were all terrible so I tried dps but couldn’t carry at all because they were all trolling and feeding. I don’t know why they did this but they just started the match off like this. The one kill my teammate got was just a kill steal too. Please help me these players need to face actually punishment. 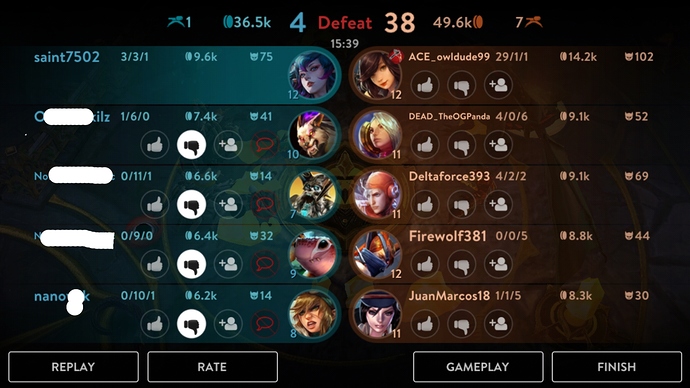 Best way is through the SEMC support form

Attach a screenshot and explain exactly what happened as well as the date and time (and server) of the match. I’ve gotten good results that way.

I feel stressed looking at that scoreboard.

At least their Skye flew away with a decent kda that round.

The worst part is the enemy team wasn’t that good. My team was just literally feeding them and doing nothing. You see I got a kill on that Skye while she was fed, that’s the worst part. My team just needed to try.

These are the kind of matches that remind me why I started playing Vainglory less. This kind of match would make me uninstall all over again.

Were they like in a party and you were just teamed up with them? Sometimes, groups like this do this intentionally coming from a lose streak to burst out their frustration. During drafting, didn’t they show any sign of trolling? Most players like this, solo or party, chat during drafting saying they’ll go trolling if they don’t get their preferred role or hero, if heroes they suggest to be banned don’t get banned, or worst, sometimes with no reason at all. And during match, you’ll find out they really will troll, like intentionally. So frustrating. And you’re stuck with them for at least 15 minutes, say no one abandons. I really badly need to also know how to report players.