Hmm thats a weird thing to do - Email Gifts 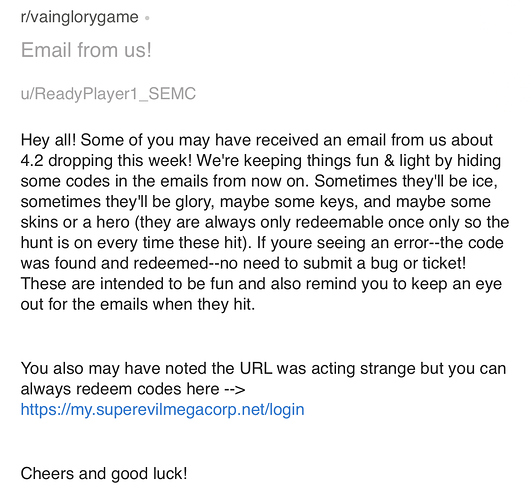 I really dont care about this but its the first time Ive ever heard about this. Maybe it’s because of the drama that happened but…

Again it seems like a attempt to get players playing (Not to sure but maybe someone could help me understand the point behind this.)

Atleast some players will get skins and other stuff. Cool.

It was interesting until she said if you receive the error don’t submit a ticket , which means (what ricegum did in his YouTube channel giving used gift cards) , they can send already used codes or send couple codes who ever get them first get them and the rest get the error .

Yeah, this is a really weird method of marketing, imo, and I don’t expect it to be particularly effective, given the volume of spam most email accounts receive and given the fact that email is a pretty unimportant method of communication for their target demographic.

It certainly reinforces those comments on Glassdoor about the competence of their marketing team.

This is one of the weirdest marketing decisions they’ve made. I don’t exactly see how having to check my email when the codes are sent out then immediately getting on the redeem site for a chance to get something that might not even be good…
I feel like they’re just trying to get a ton of traffic on the redeem site. If they really wanted to be generous with free stuff, they could’ve given out those random free item offers in-game like they did a long time ago.

I like this. Although it’s a flawed idea in respect to the relevance of emails of today, it shows that the intentions of SEMC, despite the current criticism, is in a positive direction. They are attempting, in their own way, to rectify mistakes. How useful that is is another matter.

Yea they’ve been attempting a LOT of stuff for the past two years.

I wish they would just think of a idea, make a plan, and not stepping back or forgetting it exists @hats and other features.

Ill edit this to add more onto my point.

Semc attempts to make a mastery system, no improvement or changes since release.
Semc releases hats, no chests for players to use their currency pools which are pretty full and no new hats.

I’m pretty confused. SEMC wanted things to be “mobile friendly.” That’s their justification for taking down the old forums. Trying to advertise with emails has issues like spam and mass ignorance xd. It’s not particularly flashy either.

Wouldn’t it be much easier to push a “Secret” mobile push notification? EX: Burger king and other fast food places will shoot a banner when they have a secret deal that’s time restrictive. Or, they could use the discord server? A bit strange, imo.

I couldn’t even find a code, and the email was hidden in my spam folder. I didn’t even know about it until I saw a post on reddit about it.

Yeah, it’s a very strange way to market, well, anything.

I also got the email.

It is actually a cool game to find the code hidden in the email but honestly Ill be real with you guys.

Im so disconnected with the game physically and mentally, I think the Ice code would be better in other hands.

Kudos to those who find it before the rest. 10 codes and its gone

Edit: I think I may have found the code but I dont want to use it to varify. I just hope some good players gets it and not some one toxic

Too bad the portal is down.

Are you kidding me?

They said that an error message indicates that all the codes have been used, but if throwing a 500 status is their way of conveying an error message as opposed to a simple message above the form indicating that they’re no longer accepting codes, then they need a web developer and quickly. Even someone like me who doesn’t do front end could think of a better solution than that.

I wager that it’s not so much about actually doing a marketing campaign via email as it is about seeing how valid their email strategy is right now. All of those links are tracking links, so they’re probably trying to test their outreach rate compared to push notifications, Discord, etc.

I agree. I feel like semc doesn’t and hasn’t wanted to address the fact that their basic value of communication is wrong. I’m not saying that semc is wrong in general: communication is a somewhat overrated need, but it’s still a necessity, and their totality approach to communication is harming them terribly.

EDIT: Actually if the 500 internal server error happened because the codes were already redeemed (that makes no sense) then I am a bit less disappointed. I would think it would be smarter to just say that the code is used like it used to say but its SEMC always working their best to go backwards.

Yeah, this is my biggest gripe as well. You shouldn’t ever “mean” to throw a 500 status. If you’re too lazy to implement AJAX, have your form submission return one of the 400 codes. I don’t know how Wordpress sites work, but I’m pretty sure that they still offer control of that at the very least.