HipsterSkaarf: A Season, (or how I always lost to Ozo)

posted in the original Vainglory Forums 17 April 2016 by @HipsterSkaarf, archived by same

First things first, I love this game. Second things second, I don’t get to play this game enough. And third (the reason for this thread), I wanted to know exactly how often I don’t get to play. So to that end, I recorded everything I could about Season 2. Every match, I took a screenshot (missed one due to the end-of-match bug). For each screenshot, I noted whether the game was casual or ranked, if I won or lost, which heroes were played, how long the matches took, how many toxic players there were, what kind of toxic they were, and what time of day I was playing. Because statistics. 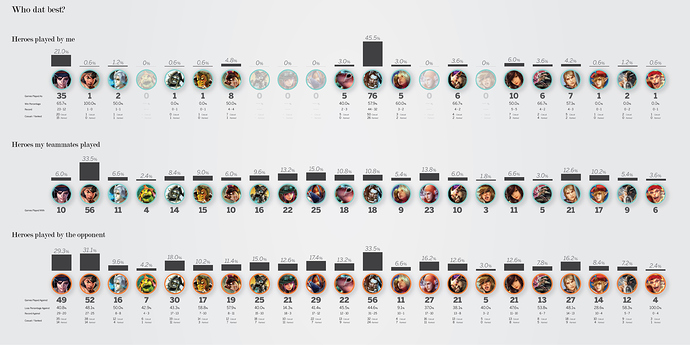 I didn’t take screenies of builds, so I don’t have item info. And next season, I’m looking forward to keeping track of bans/captain status/pick order.

The big take-aways for me… I play a lot of support. Also, I’m an unbeatable Ringo! 100% winrate. Get rekt, n00bs! Also also, I need to play more heroes - bring on draft mode!