Well GJ is pretty balanced and the only reason we might ever see a shift in the meta. He sucks in jungle but he’s a strong top making it so he can 2v1 enemy jungler and bot (especially when they choose squishy heroes) he is also best at clearing jungle so he can get free invades off. The downsides being that he is a tank with a strong early game but sht late game dmge wise so he still relies on his hypercarries not being garbage. And tbh any competent bot laner can shut him down, this is just showing that most bot laners are trash/if a top laner is skilled or not.

Grumpjaw is most played as top, and he is incredible strong, the last patch he had one of the highest userates along with 53% winrate or more, so he was quite OP

More like every bot laner is just bad at the game and isn’t used to the fact that there are top lane heroes that can clear faster than them. He is a pioneering hero that forces the bot laner to actually know what they are doing and makes the enemy jungler think about rotations so he can secure his camp and the enemy can as well. His kit is also relatively simple.

Anyways his counters are people who can kite well (skill based) and heroes who have a lot of CC whether it be Tony or Cath jungle.

If a hero who can go 10/0 in a game can’t carry a match then in my book it isn’t OP just strong because of the matchups. The meta isn’t DPS heavy so any early game hero who can go tank things late in the game will do well, such as Lance and Grump.

Even pros can’t win against Grump. L3on for example was able to win top lane in 1 v 2 in some streamings.
Edit: wrong spelling

Don’t even understand why you’re bothered (if you are) by a strong top laner. It’s not like he can carry games like Reza top. His damage is terrible late game, only being able to retain his tankiness throughout the match. He can shut down any bot laner that wants to poke you and pressure you under tower. He can win his lane but winning lane =/ winning match. The best he can do is go to mid lane when the match is even between them but if the enemy mid is more fed than your mid you are basically finished. He’s not that difficult to deal with and when you play someone like Vox instead of dashing away from Grump, dash into him to avoid the damage. His rush hits everything around him in a semi circle of his model, and not the things behind him.

Anyways people still think Kinetic is OP so just play Kinetic into him lmao. Or players can try melee heroes for once and completely shut him down, because he doesn’t have consistent damage.

No but when a tanky hero does carry the game it means they are OP and need a nerf. ATM Grump has high early game damage and consistent tankiness that scales throughout the game. He’s strong but not nerf worthy. It’s like taking away Krul’s level 1 smite lifesteal and making it exclusive to level 2 smite.

There’s no point on comparing Krul with grumpjaw. Melee heroes are not supposed to carry the game, so you cant say someone is OP just depending on his ability to carry a game

yeah grumpjaw is pretty dumb they should nerf him

Buy Spellfire, RB, and you are good to go. I realised that GJ is easy to outsustain with SM builds and proper def. Poking and keeping distance is still the best thing you can do.

My problem with Grumpjaw is his ridiculous slow for his early game. And the bonus damage for each stack he has makes him have damage even when he goes tank. Its not even balanced. 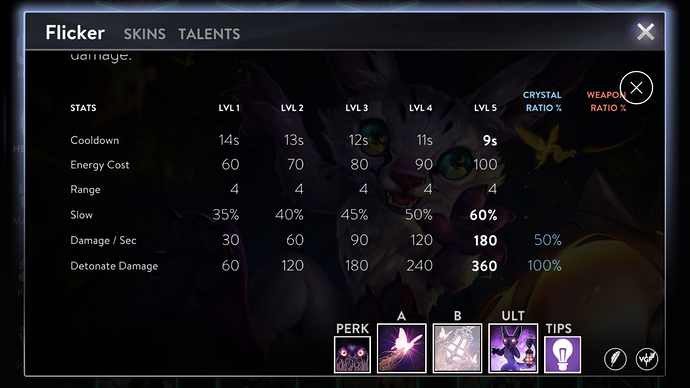 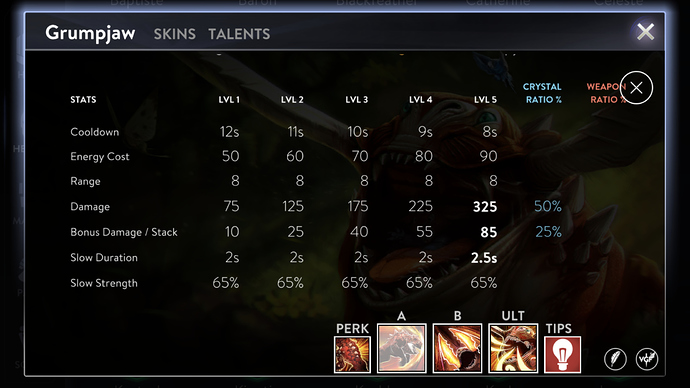 Dude is only relevant in 5v5. Not even op across all game modes lmao.

Show me a quote where a dev said that lol.

Lol my original comment was talking about Yates not Grumpjaw. @hazeleyes

But I do think both Grumpjaw and Yates are OP in the metas we have. CC and tankiness is so strong right now and Grumpjaw and Yates both do that well. I don’t know if it’s the heroes that are OP or the meta. One thing I do think that needs nerfing for both no matter meta is Grumpjaw’s A-skill damage and Yates’ A-skill hitbox. It is way too easy to land Yates A-skill and Grumpjaw does way too much damage even built as a tank.

Lol my original comment was talking about Yates not Grumpjaw.

I know, but it turned into a discussion focused on Grump …

Either way, it was off topic in the other thread, which is why all those posts are now here.

It doesnt need a quote to prove it.

It tells all right there. And others could agree (maybe).

Grumpjaw does way too much damage even built as a tank.