The visual fidelity of this sim is unlike anything I’ve ever seen. If the flight models are as good as the imagery (and the dev team are apparently fanatically determined that the simulated aircraft will fly as closely as possible to the real planes) … WOW.

One of the major shortcomings of sim flying is that you are usually flying alone. I don’t just mean that you’re alone in the airplane – you’re alone in the entire (simulated) world. Sims like X-Plane do provide some computer-controlled aircraft to try to mitigate that feeling of having the skies (and the airports) to yourself, but there are usually few of them, and they behave rather stupidly. (MD80s trying to land on tiny uncontrolled airfields, for example.) Worse, there is little or no radio traffic, and there is no air traffic control at all.

This is nothing like flying in the real world, as anyone who’s ever listened to a busy air traffic control frequency can attest: the radio is constantly alive with calls to and from controllers and other aircraft, and you have to follow certain specific procedures while you’re flying “in the system” – even if you’re flying under Visual Flight Rules and not under the direct control of ATC.

How to reproduce this environment in a sim, then?

To do so, you need to join a cooperative network that connects sim pilots (so that the skies are no longer empty!) and adds actual air traffic control services (just like in the real world, when the sky starts to get crowded, you need someone to direct traffic). One popular service is VATSIM, which provides service worldwide but whose hours and coverage are limited. PilotEdge is another network which takes a different approach: their service area is concentrated around KLAX (Los Angeles International), but ATC service is guaranteed to network members during operating hours (0800-2300 PT, 363 days/yr).

I installed PilotEdge this morning, and when the network came online, I gave it a quick trial run: 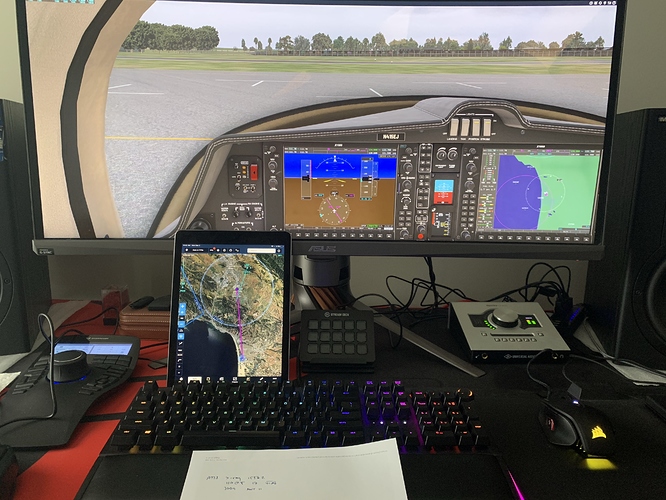 Here, I’m sitting on the ramp at Oceano Airport (L52) in Southern California, preparing to take off for a short trip to San Luis Obispo (KSBP). I’ve obtained the weather at KSBP by listening to the ATIS (PilotEdge provides a very realistic ATIS broadcast at every airport in their service area which has ATIS in the real world.), and because I’m connected to the PilotEdge network, my iPad is showing all the traffic within 20 nm of my airplane: 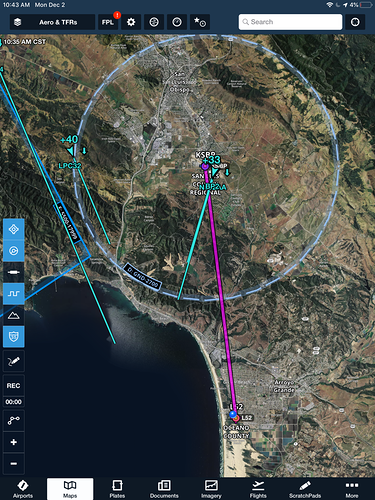 Another really neat feature of PilotEdge is that it redirects the audio from X-Plane’s radios to your headset, but other sounds continue to play through your computer’s speakers. That adds tremendously to the realism!

Depending on the coverage area you choose, PilotEdge costs $20-35/month (with discounts if you prepay annually). When my trial runs out, I will definitely be continuing my subscription.

Have you tried Logitech ones?
I have a driving sim setup at home and am looking for flight one since we getting close on next MS flight sim release (?).
Sad that it’s freaking hard to find thrust master ones in India.

I’ve used an inexpensive Logitech one in the past, but I found it to be kind of difficult to control the aircraft with it, so I abandoned it in favor of a yoke (CH Products flight yoke), which had its own problems and which I would not recommend.

The Thrustmaster joystick, on the other hand, is an absolute joy to use – extremely sensitive and precise, without any of the flakiness of my old joystick. I’m certain that the difference is due to the use of Hall effect sensors in the Thrustmaster.

There are loads of people using Logitech joysticks for flying, however, so if you can’t find the Thrustmaster, you should be fine with a Logitech.

Flew my first flight on PilotEdge this evening – great success! I flew a short 47 nm route between two non-towered airports (L52 and L88) in Southern California. Although visibility wasn’t great, it was still quite scenic, as it took me over part of the Santa Ynez mountains:

PilotEdge has a cool training program to help sim pilots become comfortable with the airspace, communications, and ATC procedures within the PE service area. (All of these mimic their real-world counterparts VERY closely, so the training can even help real world pilots who are looking to improve their skills for operating in the system!)

I earned my CAT-1 rating with this flight! I got to see my name appear on the PilotEdge home page twice: when I completed my flight and then again a few minutes later when my rating was awarded.

I love the DA62, but one thing that kind of bothers me about the various paint schemes included with the model is that the registration numbers don’t match the one I’m using when flying the sim. (Incidentally, I have actually reserved that registration number with the FAA, so it’s MINE! Muahahaha!)

I decided to try creating a new livery for the DA62, and it turns out that while tedious, it’s not too difficult to create a basic paint scheme. Here’s a quick look at my progress so far:

For comparison, this is the default scheme included with the aircraft model:

Sightseeing in Ohio this afternoon! In the top image, I’ve just taken off from Clermont County Airport (I69), home of Eastern Cincinnati Aviation and the location of my very first flight lessons many years ago!

The scenery looks realistic because I’ve installed new scenery textures based on orthographic photos, which are overlaid on the terrain. (It makes things look SOOOO much better, plus it’s easier for a VFR pilot like me to find the airports!

) The upgraded scenery doesn’t affect frame rate, but it sure does consume disk space! (Over 400 GB for just California and the Mid-Atlantic states!!!)

Over 400 GB for just California and the Mid-Atlantic states!!!

That’s for this photorealistic scenery, which is entirely optional. 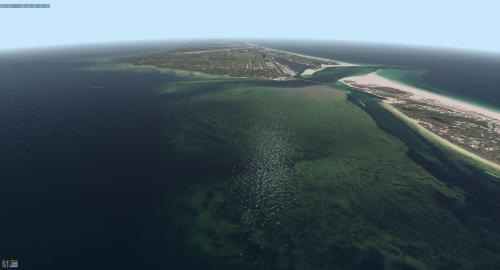 The X-Plane Orthophotos Project This project provides high quality orthophoto scenery for X-Plane that can be easily shared among the community. Each orthophoto package will cover a large region that may include multiple states, or a portion of a...

Some images from a couple of today’s flights through scenic Southern California. I keep meaning to take some screenshots on approach to the airport, but I get kind of busy with preparing for landing and I keep forgetting! (It’s exactly like flying in the real world in that respect!!!)

Found an entirely new thing to occupy my remaining spare time: creating virtual instruments for use with X-Plane! There’s an amazing piece of software called Air Manager from Sim Innovations that allows you to use image files and Lua scripts to recreate in software existing instruments or even fashion your own. The Air Manager software manages the connection to your flight simulator (it works not only with X-Plane but also with Flight Simulator X and Prepar3D), which doesn’t even have to be on the same machine as the Air Manager software.

This Cessna 172 panel was created entirely within Air Manager, and when the simulator is running, every instrument you see works exactly as the real one would: 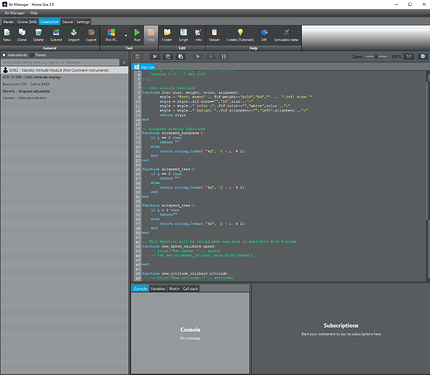 Here’s the bit that convinced me to buy the software ($70 US): you can use an Arduino to connect hardware such as switches and rotary encoders to replicate an instrument in hardware! As my goal is to eventually build a replica of a DA62 cockpit (I changed my original goal from a DA42 once I saw the DA62 cockpit!), I’ll need to be able to do this once I start building!

Dude this is the coolest thing ever. Just so you know. 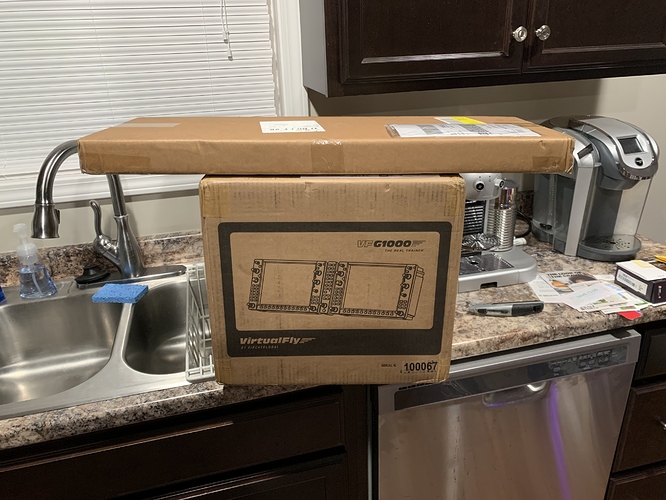 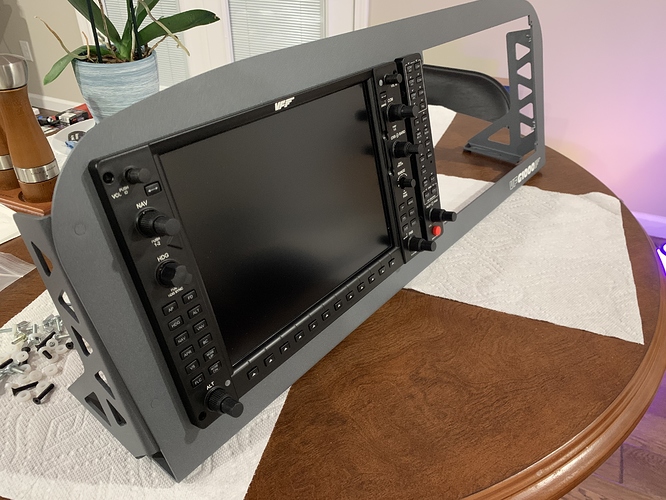 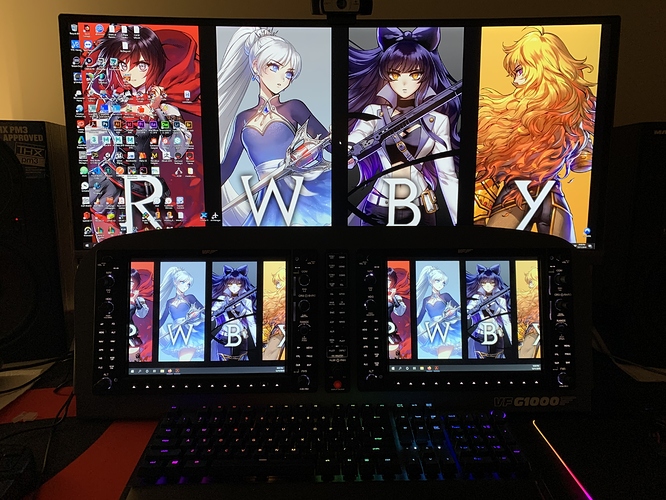 The Virtual-Fly G1000 is a near-exact replica of the Garmin G1000 primary flight display, audio panel, and multifunction display, and it provides not only the more realistic experience of always having the flight instruments right in front of you but also helps to eliminate the decidedly unrealistic experience of having to use the mouse to push buttons and twiddle knobs in the cockpit.

Virtual-Fly sells a beautiful desktop stand for the system, and you can see how the displays are mounted in the 2nd picture above. The monitors are simply standard XVGA displays, and they’re connected via HDMI to my video card. The bezels – with all their knobs and buttons – connect via USB 2 to the PC.

Setup was a breeze, as X-Plane immediately recognized the system and mapped all the buttons to their proper functions. It took just a few minutes to get the built-in G1000 emulator set up to use the new displays, but once I did, you can see the result 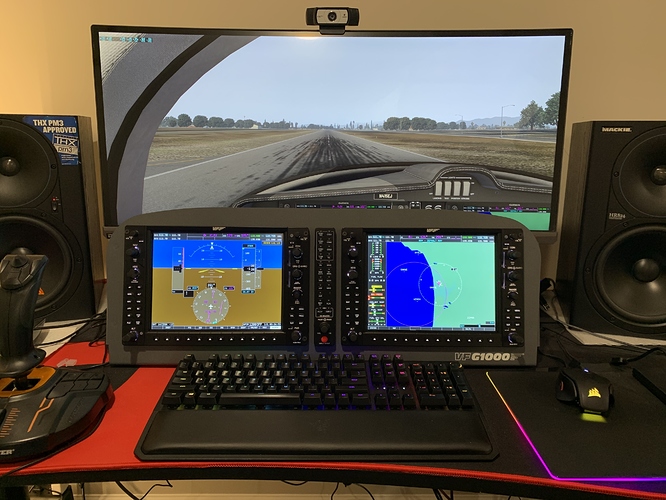 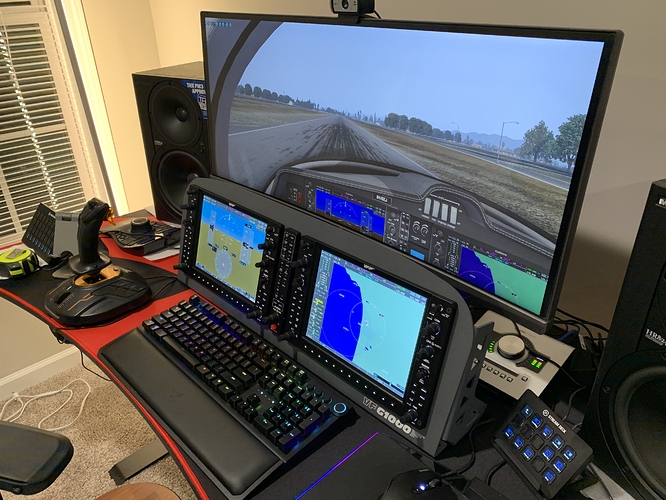 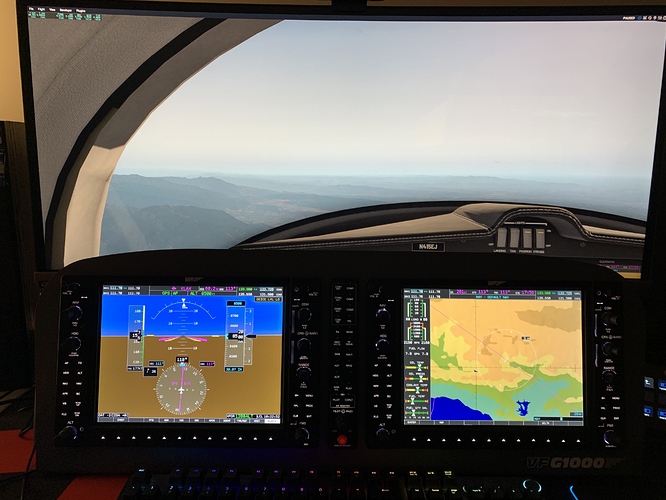 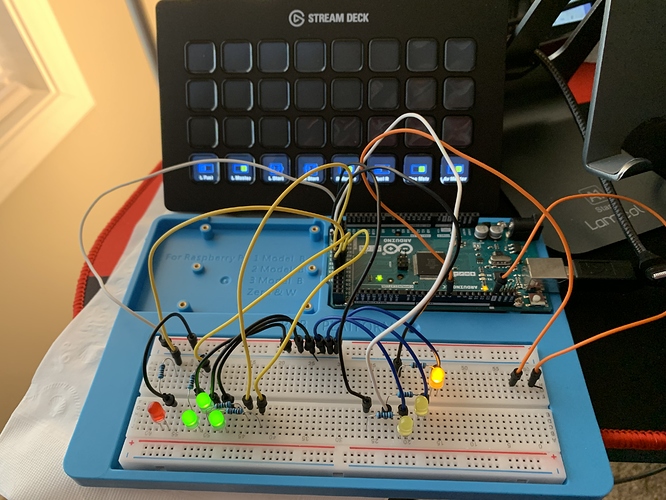 Wired up (not very neatly) a little prototype of the gear and flaps indicators on the DA62 panel to see if I could get them working with X-Plane … and after a little bit of coding in Air Manager, they work perfectly! (I even added the proper indication when the “Gear/Fire Test” button is pushed – that doesn’t work the way it should on the simulated instrument panel, and it has bothered me

Time to start collecting parts to build my panel …

For those interetsted here are the actual indicators in the real aircraft: 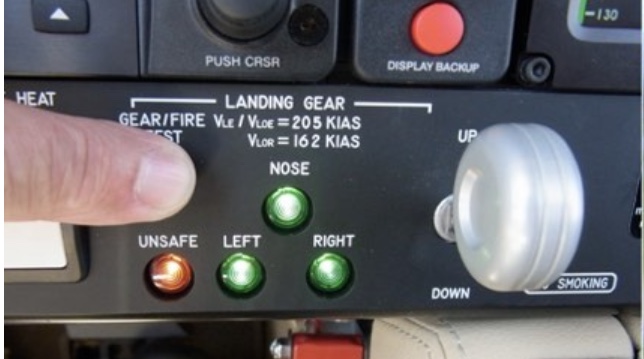 After a really busy week, I finally got a chance to do some flying today on my day off! I took a leisurely flight down the SoCal coast to sightsee and to practice with the Garmin autopilot. Beautiful weather today, though it was a little bumpy at times at the altitudes at which I was flying (3000-5000 ft MSL).

Were you flying in a simulation or real life?

Real life flying is coming soon … My New Year’s resolutions for 2020 are (1) get my medical, (2) get current again, and (3) get my instrument rating. A bonus would be getting my multi-engine rating as well.

These goals are hard to achieve, at least under my perspective , hope you all the best and I would love to see your real life flying pictures! 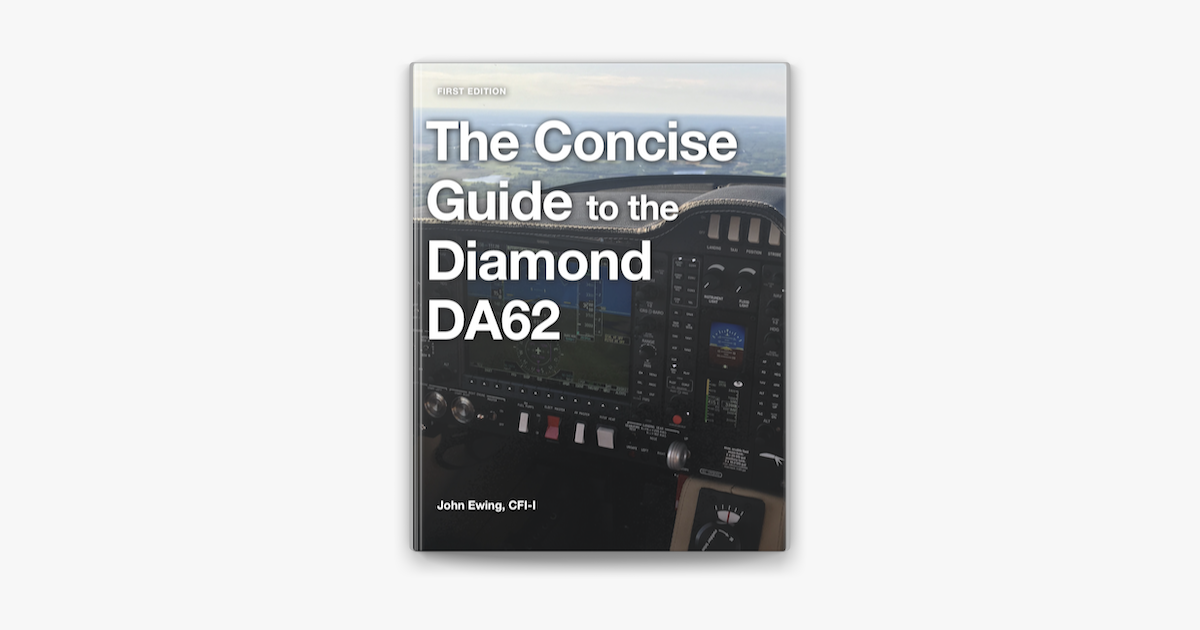 Came across this really excellent ebook on the Apple Books Store. If you want to fly the DA62 (in real life or in a simulator such as X-Plane), this is $20 US well spent.