Flex on us, bois

Show some of your Andromeda hero masteries here! This made me realize I REALLY need to step up on other heroes tho kek. Grace is my only hero with good stats as well as Fortress…kinda…I die a lot with him kek. This is my Grace ranked mastery score 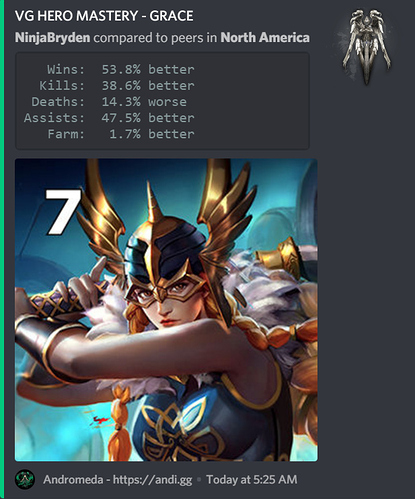 Hold up I gotchu just tell me your ign and hero you wanna check for your ranked mastery score :^)

I quit ranking tho
If you can somehow check it for 5v5 casuals, which idk if that’s possible, here.
Ign- Airalin
Region- SEA
Hero- Grumpjaw
eeeee

I don’t know if 5v5 casual is an option.

If it isn’t, I don’t even remember what I used to play tbh…
Maybe just search for ardan lol
Also gratz on vgr!!

Gots to work on your Ardan fam so do I tho

The mastery feature is currently based on your performance across ranked + casual matches in 3v3. 5v5 data isn’t presently included because the broken matchmaker has an unpredictable effect on win rates, among other things.

@NinjaBryden check my Ozo for me fam

Hecc you need more ranked games for him fam

How to check this on discord? What are the commands and what bot?

a Discord bot for players and fans of Vainglory

Hey could you be kind enough to tell me the command. Im unable to find it forsome reason. Also does it work for sea?

Just fyi, specifying the mode is unnecessary if you supply a hero name, because the mastery feature is based on 3v3 standard mode matches.

Hey could you be kind enough to tell me the command. Im unable to find it forsome reason. Also does it work for sea?

Yep, works for all regions.

The feature compares the performance of the IGN you specify to players in the same visual skill tier and same region. It’s based on 5 measures: win rate, kills, deaths, assists, and farm. Basically, Andi calculates a decaying average of your performance in each category, then compares it to the average of your peers (= same skill tier, same region). If you’re equal to or worse than average, you get 0 for that category. If you’re better than average by 10% or more, you get 2 points. If you’re better than average but not by 10%+, you get 1 point. 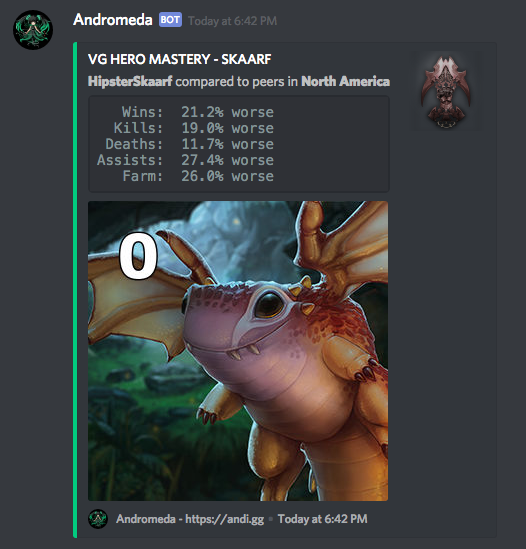 Ooh, cool, thanks for explaining. Could I suggest a formatting tweak to make that more clear? Maybe add a point column with +1 or +2 so it’s clear where the mastery tally is coming from. You could also color-code it by domain maybe? So, a value between 0 and 10%, and the +1 are orange, and a value above 10% and the +2 are red, for instance?