EVE Echoes due to release in August

After a lot of hints and marketing hype, Netease officially announced the release date for Echoes yesterday. During the livestream, they also showed gameplay footage, trailers and answered questions concerning core gameplay features ready at launch, monetization and what is planned for future updates.

I’m not really sure how familiar people here are with EVE, but aside from the usual concerns of this turning into a mobile pay-to-win fiasco, I am actually having ethical concerns, and would appreciate other perspectives.

Background: One of the setting’s defining features is the struggle between the four major (NPC) Empires. And while we do tend to have pretty strong convictions concerning things like slavery, nowadays, the original writing takes great care to avoid entirely black and white scenarios.
The Gallenteans may be touting democracy and personal freedom - but at closer inspection that facade rapidly breaks down and gives way to politics and public opinion controlled by lobby groups.
The Minmatar Republic is proud of returning to some semblance of its tribal roots, but those traditions are often unforgiving, cruel and prone to ostracise those who do not fit the norm.

You get the picture. There’s moral ambiguity under a veneer of idealism, which allows people with very different outlooks on life to join one side or another and feel at home. Yet as they familiarize themselves with their surroundings, they’re forced to recognize that just about all forms of social structure have their own limits and dark recesses, and no promise should ever be taken at face value.
EVE is brilliant, in that regard. It forces you to think.

Enter Echoes: Netease have decided to dive into the lore, and introduce one of the ancient and forgotten races. With all that usually entails in a Sci-Fi setting - completely OP technology, supposed mystery, yadda yadda yadda.
Stated reason being that they wanted to work on something with a far eastern touch… and I guess all the existing races rooted in different traditions from vaguely thereabouts somehow didn’t fit the bill.

Now, I’m not opposed to adding to EVE lore. It’s understandable, even, that Devs would want to iterate on something they have experience with, and Chinese Devs may just want to contribute Chinese culture to a project.

Here’s the issue: While all the other factions -modelled on different economic and social ideals- are decidedly human, constantly fighting each other and their own shortcomings and worst impulses… the “Chinese” are above and beyond all that. They have come to civilise the unwashed masses… and just like that, a battleground of ideas where no one’s completely right or wrong has turned into a propaganda vehicle for the Party.
We’re talking about a nation that has made it a policy to replace entire populations with people of Han Chinese descent, in some grotesque form of slow-motion genocide. Politicians so insecure of their own propaganda shit-show that they can’t allow their populace to talk to foreigners on MMOs, and have gone full-tilt Orwellian in general.
Let’s just say that there are a few gaps to bridge from that reality to the oh-so-enlightened Space-Chinese.

Now, here’s the question: Is it ethically feasible to financially support a project that is obviously pushing a false narrative, in accordance with Party lines?

Wait, what does Netease have to do with EVE?

EVE was created and is run by CCP Games of Iceland. In 2018, they were purchased by and are a wholly owned subsidiary of Pearl Abyss, the South Korean gaming company.

Sorry, I should have given a little more context. EVE Echoes is the mobile off-shoot - a port, if you will, with slightly adjusted UI and UX. The mobile version will be using its own single-server architecture*, seperate from the Tranquility cluster.
It has been in development by Netease since 2017, and that deal may have had a substantial influence on CCP’s evaluation during the Pearl Abyss takeover.

*China likely being the exception, due to a recent change in legislation there. Chances are that we will see two independent clusters - one for China, one for the rest of the world (akin to the Tranquility/Serenity split of EVE Online).

So, I take it you play EVE? I’ve played in the past, and I WANT to play it more, because it’s a simply AMAZING game, but it’s such a time suck that I’ve never been able to accomplish much, so after a while, I just give up.

I used to play EVE proper - a long, long time ago.

Echoes had an open beta that I couldn’t resist - and while it was very rudimentary, in terms of features, it also didn’t have any of the issues that ramped up on Tranquility, over the years. It was refreshing, and the port surprisingly solid, both in terms of UI and -frankly- working at all. I certainly wouldn’t have predicted that EVE would ever be playable on a phone.

The mobile version is more forgiving, in ways that make sense for a slightly more casual audience. There was no PvP in high-sec, and it may very well stay that way, depending on how war-decs are introduced (if they are at all).
So you can set your autopilot someplace when you get off work, drive home, run a quick mission and hop off again - without coming back to a fresh clone every time you glance away from the screen for a moment.
It’s more accessible, overall, and personally I… I sortof, kinda liked it.

The time sink is still very real. But then, a lot depends on how exactly you set your goals. If you only log on for 2 or 3 hours a week, but there’s a fleet scheduled during that timeframe, you arguably have the most fun per time spent. Definitely a lot more than someone brooding over spreadsheets for Alliance logistics for an entire weekend.
Looking back, I think EVE can completely consume your free time, and then some - but that doesn’t necessarily improve what you get out of it. 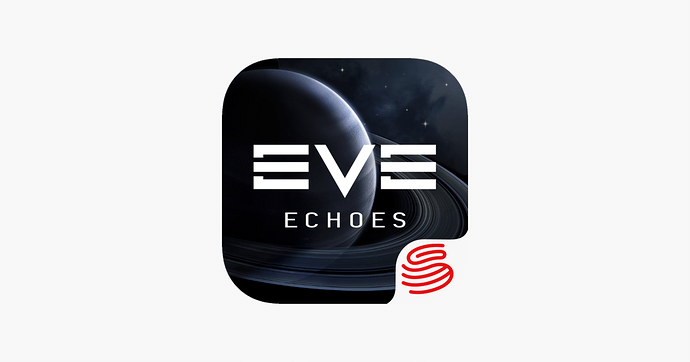 ‎EVE Echoes is a next-gen mobile spaceship MMO game based upon hallmark EVE Online design principles. In EVE Echoes, players will be able to forge their own path to glory within a massive space sandbox environment, forming alliances with other pilots...

What even is going on with the OneBox engine?

Not really a massive mmo fan besides FF14 for the obvious anime aspect but since its on the appstore and is space-y, Ill try it out!

Seems intriguing. […] since its on the appstore and is space-y, Ill try it out!

You should make sure to get on @hazeleyes’ good side. Since he is in the unique position of having passed on his genes, he’s set up to build an economic empire on the tiny backs of his mining minions.

As this is going to be a single-server-thing, it’d be awesome to fly together, if we get the chance.

Short update on changes to the capabilities of F2P accounts since the livestream:

Netease has been super receptive to feedback, and granted free accounts access to markets, industry and corporation hangars [remove only].
The only things off limits are private contracts and corp deposits, to make botting and transfering ill-gotten gains more difficult.

Naturally, skill training will be slower and there are limits to which ships you can fly on a free account - but this seems like a very fair (even generous) deal to me.

I’ve got to say that I’ve been extremely impressed with how the Netease Devs act on player feedback.
My personal experience has been less than stellar, since I was interacting with clueless support staff who barely spoke English - but criticism levelled directly at Devs via social media or discord has been iterated on rapidly and with consideration.
If you’re coming from EVE Online, with its absolutely glacial pace of even the most basic balance adjustments and in some cases outright braindead design decisions against uniform community backlash, the contrast couldn’t be more striking.