I was on a losing streak in BR and Blitz, so I decided to try a real match, and had a lot of fun! 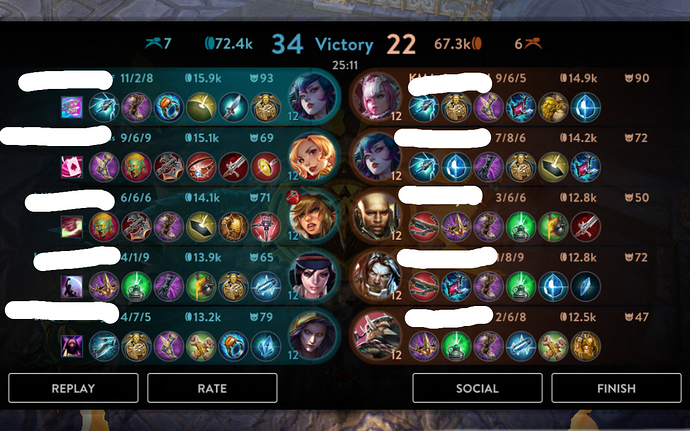 Met the enemy Lorelei in bot lane, but you can guess who won the trades.

It was back and forth through the whole game, but we caught an ace and Blackclaw right at the same time, which ended the game. Gg for real everyone.

why did you blank out your own ign? this is casuals yeah? 2 lorelai’s facing off each other… i hate that… can’t tell who’s pool is who’s.

oh yeet I didn’t even realize. Oops. Maybe I’m subconsciously terrified someone will look up my vgpro and make fun of me ¯_(ツ)_/¯

Lol. people can still look up your vgpro… but I don’t think they’ll make fun of you.

Tbh i couldn’t give a damn about what people think of my in-game stats. ^^

Good job. Playing full matches is a lot of fun. There’s a demand of focus and attention that Vainglory (read: MOBAs) take that I think is unattainable through other genres. Play more! Grats on the cool-timed Ace, too.

Idk how 5v5 rank is but 3v3 rank for me is toxic casuals seem to have less toxicity for some reason right now. Maybe it is due to people being scared to downvote others and rate the match(or they are lazy)

Lol. people can still look up your vgpro… but I don’t think they’ll make fun of you.

My ign is different from my username, although it’s probably no big secret anyway. I think it says it in my profile actually. It’s an irrational fear. Again, ¯_(ツ)_/¯.

Rank isn’t terrible in itself, but since I’m already low for this season and haven’t heard of the mmr getting fixed, I don’t want to play for fear of getting booted from my guild. It’s a pretty decent one and although I’m not attached to it, the rewards are kind of nice.

I think I might try 5v5 ranked, because it seems to me that 5v5 is easier than 3v3. I don’t really like full 3v3 games because there’s a lot of pressure to be good at your role and fill you position, and I honestly don’t have the skill to do that. Maybe I’ll like 5v5 though.