This isnt really a post to make a statement but its supposed to show you and persuade you to play her mid!

Looking at how most high tiers are playing her in NA, shes really strong against Varya and Celeste. Samuel due to his kiting and Lorelai from her pool empowerment make it a little hard for her thoughz

I tried to find evidence find evidence besides a bunch of responses from tier 10s but due to the nerf for Roam Lyras, CP Lyra rose from that. I looked at VGPro and at her build and abilities path and i found a light piece that can help you think im proving my point correctly. 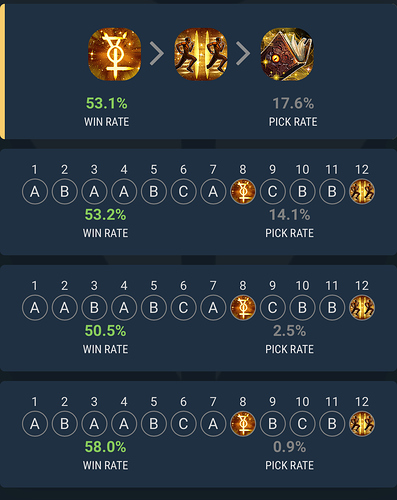 Thats the path of CP lyra and ill assume its for CP Lyra since that path isnt beneficial to Roaming. 53% Winrate for a assumed CP Lyra Build.

The Key to playing her in lane is to not use her Heavy Missile attack on the minion but only her Light Missiles. Unless u attack the enemy. I see most CP Lyras use their Heavy Attack then run out of energy before the 3 minute mark and leave them unable to teamfight.

When u get Alternating Current you can light attack the minion and that should bring it to 2/3 of its health, then u can double hit it to death. That way it takes u two Lights hits and one Heavy hit to kill it. Its makes lyra less prone to running down her Energy.

Her early game is alright but you really want to farm and farm until u get AC. Thats her core item that brings you online!

Since Midlane is mostly filled with CP Carrys, ill list how to play against them. But like one sentence since i get bored writing long pieces of writing. Im talking about early games for these heros since i dont want to write more ;-;

Samuel: Dont try to fight him, just dont, you’ll lose due to his kiting and perk. Just let farm and attempt to survive until u get AC. Thats when the tables turn. You will soon be able to kite him out with your basic attacks and Imperial Sigil BUT ONLY WHEN HIS DRIFTING DARK IS DOWN!!!

Celeste: Celsetes early game is hella prone to gettin her ass hit by something. Considering your only using her Light attacks against her minion, Throw out occasional Imperial Sigils and trade basic attacks with her. You might get hit by a Helio but your full Basic Attack completed deals more health to her than she does to you since ur a tank. While u basic attack, move always to prevent being hit by a helio.

Varya: Just farm, Varya is weak early game so u can tank a couple hits from her and maybe a Lightning Spear. Your B is really good against her.

Lorelai: Same as Samuel, avoid her and always move to prevent from being hit with her A.

When u unlock her last boost on her portal, u become a turret itself, including being stacked on DE

Crystal Piece and gun thingy <-- For all builds

If u have questions, ill gladly answer them and proceed to force i mean persuade you to play her

what do you buy as an energy restorer?

Late game, her Halcyon Chargers does it for her and maybe a CP infusion, her late game Energy Pool is still full even after a couple of Imperial sigils. And since your a Carry, u really dont need to be popping Bulwarks since it does so little for u besides a “Bitch Back OFF” barrier. Clockwork is ok for having your abilities up but you really should be basic attacking and gaining DE stacks as your main damage.

This is definitely interesting.I’m a mage main with Samuel being the core,and seeing your talk about CP Lyra does pipe my interest in trying her,cause before I don’t really consider her as a battlemage

So what’s you’re main damage source,Empowered autos or Imperial Sigil?And is it safe to do the old Teleport Bulwark combo with a CP build?How about a half captain build like Adagio’s and Catherine’s?

Perhaps the meta has changed (not played much recently) but isn’t AC a waste on her?

I thought the idea was to build CW,SF and a BM so you could spam her A/B? The AEO effects of her A/B lead to huge late game DMG on entire teams and the CW makes them spammable.

I wouldn’t advise to build the half carry half roam build because unlike the other roamer, you NEED cp items to be a carry threat. As u stated, the teleport-bulwark is how i and see other people finish off peope since you pretty much cut off their escape route. The main source of damage is Empowered Autos and occasionally Imperial Sigils. Not much the bulwark.

AC isnt much a waste on her. Before her Imperial Sigil nerf, The build was SG CW then everyone’s different build but since that nerf, her Imperial Sigil doesnt burst or do as much damage as it once did. They changed her heavy auto cp ratio to 70% to 80% to help spread the damage across her kit. I do agree that her A and B does massive damage but only when your almost fully stacked on DE but clockwork is a waste on her if u just want to throw out ur A and use it as your main damage output.

Before telling me wp mid doesn’t exist they do… When too many allies are CP, Gwen Ringo Baron and Kestrel are played as wp midlaners… They rotate down for the wp buff and bot lane steals the enemy CP buff…

If her ratios at higher surely a SG beats an AC?

My concern with AC is she doesn’t really benefit from attack speed, she’s not a great stutter stepper and your forgoing all that extra DMG on basic attacks and abilites from a SG (especially if using empowered attacks) for an empowered attack every other turn.

Our also missing a big trick if your not building a SF, she has insane AEO abilites and the potential for team wide mortal wounds can’t be underestimated. The clockwork is for both cooldown and energy regeneration (the build was defiantly CW/SF/BM), I realise it got nerfed now but she’s an energy monster and requires some form of regeneration (maybe HC is enough, though I doubt that).

It’s not exactly a secret, Lyra was a monster in 3.4 the only reason she got less lane time was because she was No# 1 roamer at the time.

I havent really seen players play wp mid but i totally agree with u that a Wp can demolish Cp Lyra, including Ringo. But they don’t totally make her useless, there are ways to go about it

I see what your talking about now, I havent really tried the build ur talking about and i plan to use it to see how it holds out. Im basing all of my experiences and knowledge off of the build which im used to. I really dont build SF unless im in a ranked and i build it on the 3/4 item. Ill get back to you when i try it

Do you guys know if the varya B-Lyra B bug is still around? It’s probably the most annoying one I’ve encountered tbh if it’s not fixed I hope they do so ASAP.

I don’t know but to be honest I wouldn’t try it either haha. Well unless I am Lyra but I am not usually. My guess is it’s still there. Haven’t seen it mentioned in patch notes.

Not seen it, how’s it go? 30 characters bleugh

except Vox a little tricky but still counterable.

I know even I used her in 3.4 patch many times… and abused her CP path…but i often solo queue and rarely see people choosing her for cp but as captain

A real Ringo, note a real one will smash into you.
Lyra lacks early game range and can be bullied hard. Deny her farm and snowball her from there on out.
Boe into SB first…

Varya uses B into Lyra B, gets stuck for 2 seconds