Alright, before you instantly berate me with “she’s not out yet” or “give her a chance”, I just want to say that for the most part, I conceptually love Malenes kit. The switching on an ability is done much better than I thought was possible, the enhanced AA after switching is interesting, and I like the contrast between the protective light and destructive dark. But here’s my problem with her kit. My single problem with her in concept that IMO could possibly ruin a characters kit.

Why does she have a scaling on AAs?

Here’s my basic rundown for most characters who can form switch on ult in other games.

So why, may I ask, does Malene need a CP ratio on AA? It feels like a crutch that her kit doesn’t need. I would rather have bigger ratios on her pretty weak damage abilities, since when watching clips of her, she seems to do less damage at full build than a spellfire clockwork Celeste does at level 8. It LOOKS and FEELS like SEMC had to give her constant DPS with a flat CP ratio to avoid a certain cancerous item…

Aftershock!
Realistically, looking at Malene, she seems like the aftershock Queen. Which is why SEMC is likely trying to give CP sustained damage that can keep up with her rapidly switching and AAing. Can you imagine a tank Malene with AS CW BM with constant procs, two escape abilities and a solid amount of CC? It sounds infuriating and the worst thing ever to play against.

So basically, I don’t know what to feel about Malene. Looking at her kit I was hoping for a hyper aggressive midranged combo burst mage, but based on the clips I’ve seen, she has nowhere near the damage needed. Looking at her passive, it seems that she would be a backline mage who does constant DPS, but her scaling on it is too low and her range is a bit too short. Looking at her CDs, she seems like a perfect abuser of aftershock, becoming a tank with her barrier+speed and invulnerability.

Who knows, maybe I’m wrong. Maybe I’m incredibly wrong and Malene is going to one shot people at level 2 with CP buff. But from what I’ve seen, she seems like a potentially unhealthy character who will be defined by her ability to abuse aftershock than her actual kit. 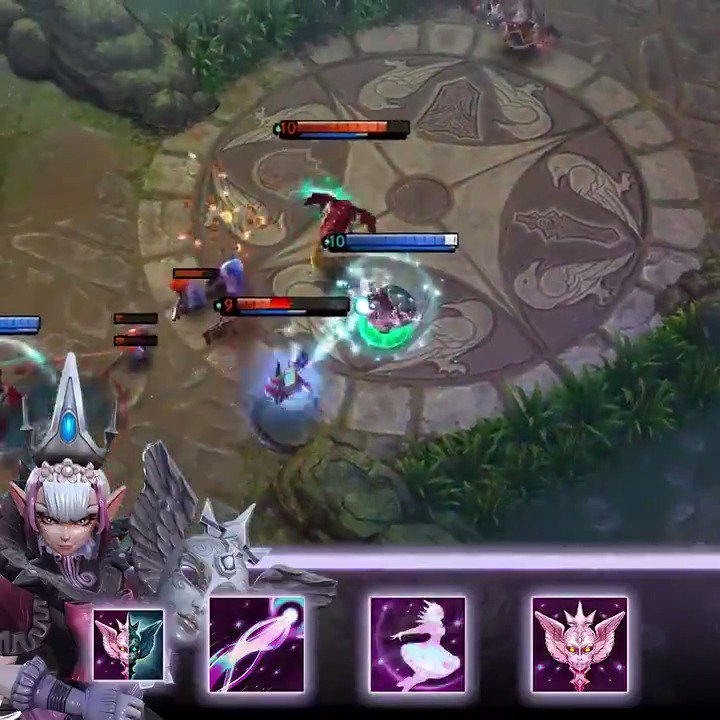 Seriously she does barely any damage in this clip and this is how SEMC shows her off ):

Maybe the Malene in this clip was underfed or didn’t have full build yet? I mean I agree with her barely dealing ANY damage in this video but there must be some type of catch to it.

Aparently AC works really well with her. I didn’t really think about AS. maybe both? BM thrown in for good measure. lol.

I’ve seen the pbe testers play with her and honestly, they’re deliberately playing down her full potential.

I’m watching, and I’m like… why the hell is he not using abilities… too busy chatting? Give it time to settle.

From what i can see, She’s going to be top pick / ban

You guys are forgetting that malene has a ton of cc in her kit it probably to make up for that she has 70% slow on AA and her B dark form gives her slow + immunity.

Do you think she might abuse AS?I can see a build like that of varyas with AC DE BM EoH and abuse her switching and AA ratios. She does have an abnormal amount of utility for a mage and that might be the reason her damage might be below expectations.I guess she might be an early game mage who with her lvl 1 ult and good base damages will win most lane matchups and snowball from there, late game she looks to be outranged by other mages but she has the kit to get in and get out quickly which makes her as much a threat as assassins. Imo she is going to a top pick just because of the versatility of her kit, Brokenmyth even listed a possible roam path which is how good it seems to be.

I think with how Tony and Varya were released, they are just cautious of releasing another broken hero again.

Going to be ingested to play her, I like th idea of a hero whose abilities behave differently based on which form you’re in.

I tried to do something similiar recently based on CP/HP built, was a hero concept idea.

Think she’s going O have quite a high skill cap as you’ll need to get to grip with chaining these abilites.

Ps I just watched the clip, doesn’t Llorelai have her barrier up? Also she’s only level 10 which suggests she’s not fully built!

You won’t need to get concerns with Malene tbh. Malene relies on switching forms and combo-ing her abilities with her empowered basic attacks to deal the “massive” crystal damage SEMC said she would.

Without those combos, Malene would do pretty meh damage, having very low crystal ratios in general and very bad crystal ratio on her basic attack.

She is a mage that trades damage for utility, survivability(invulnerability for 1.5 seconds? Not even a tank or a captain has such an ability), and mobility, to make sure she doesn’t tip the balance.

Malene will struggle against poke from the likes of Skaarf and Celeste in the laning phase while doing better into someone like Varya who has poke that is easy to doge and with lower mobility=easier skillshot. However we should keep in mind that her barrier+ movement speed will keep her healthy in the laning phase by tanking the skill shots AND/OR avoiding.

Her Poke has a long cooldown though, which makes harassing more difficult cause of low damage on basic attack and her A in lightform can be body blocked.

Also she’s only level 10 which suggests she’s not fully built!

At level 10 and 2 items a Celeste or Skaarf can burn through the barrier by themselves.
Based on Gwen’s damage they are pretty decently into the game, with 2-3 items.
Malene’s scalings are some of the worst in the game.

I don’t know, it all seems like red flags.

You won’t need to get concerns with Malene tbh. Malene relies on switching forms and combo-ing her abilities with her empowered basic attacks to deal the “massive” crystal damage SEMC said she would.

Without those combos, Malene would do pretty meh damage, having very low crystal ratios in general and very bad crystal ratio on her basic attack.

Yes, so why even have the CP Ratio on AA? Why not just focus Malenes kit on her combos? I’m going to rehash here, but I personally think it’s to give he mage-y path sustained damage against an Aftershock build.
It’s not hard to see how the kit will work, but the numbers are honestly put into the right places from the POV of concept. If SEMCs own official ‘advertisement’ clip can’t really show a character being good, than either that character is underpowered OR SEMC is hiding the strength of their character for other reasons.

Burn through a barrier in a couple of second at level 10? Seriously? I don’t think you can draw any conclusions from a video clip which is 15 seconds in total.

If she turns out to lack DMG it’ll be the first time in the history of VG that a released hero is underpowered. They always over power them on release to encourage ppl to part with some ice.

If she turns out to lack DMG it’ll be the first time in the history of VG that a released hero is underpowered.

Bold statement, for something that’s completely untrue.
The videoclips SEMC puts out always show off a character played at their best. Why would they show off the clip otherwise.

with tt or ps, her wp path is probably nice…

root-barrier and evade.
not to mention that her ult cooldown is very short so you can slow and burst

I’ve been playing for a number of years, you tell me which hero was released but then hotfixed for being too weak… vast majority are considered game breaking on release.

As for her being underpowered; having watched pro’s play with her it’s safe to say her DMG is broken, her dark side empowered attacks are chunking people down early game for a third of there health. Her Op utility means she has slows, barriers and invulnerability (a free reflex block which negates all DMG) and its already clear that she requires a hotfix.

Firstly, there’s no real reason for them to hotfix something to buff it. If 1/30-40 is too weak, it doesn’t matter, but if 1/30-40 is too strong, it’s a big issue.
However, I can name two characters I feel did deserve a buff on release, Rona and Idris. Rona was incredibly weak on release, and SEMC decided to megabuff her in the next patch because of how much she sucked. Idris has potential but never could reach his late game realistically, and when he did reach it, the payoff flat out wasn’t worth it compared to other characters. These characters could have had a buff similar in magnitude to the release Lyra patch without being OP or particularly strong.

It’s day 1. In my post I discussed the evidence given through her design, numbers and gameplay we had seen of the PBE, which was more in total. I don’t see how that’s more valid than my points that Malene is concerning.

And reza, he had the worst numbers in the entire VG history.

That’s not true, Idris was weak on release, Reza was weak

Skye was terrible on release…

Skye, Reza, Rona, Idris… I could go on probably