Changing the crafting system was a Bad idea

In any game, after a system is changed due to suggestions there are always people who come out saying the change sucks. As cliche as this is changing the skin crafting to this was a really bad idea.

The reasoning for the change was that it is tedious individually destroying cards and the system generally was confusing. These are not good reasons.

The tiered system meant that higher tiered skins were harder to get and so there was a lot of value attached to them. Because of card rarities, there was always a sense that you picked up something valuable when you pull an epic or legendary.

For some reason developers underestimate what reward value does. They think that because people say they want things to be easier that is what they should do. Arena net made that mistake and they are still paying for it.

You could have just solved the tedious card destruction issue with multi card selection and solved the confusion problem with a tutorial on the crafting page.

There is no value in the new system. Cards and opals were the only rewards. Opals you rarely get and cards are gone. Without any valuable rewards you are going to get a lot more people who just drop the game.

Whats worse is this is a mobile game so there are probably more casuals here than in Lol or Dota 2. Casuals are not heavily invested in ranking up to please their ego. Without anything shiny to wave in their faces they will move on.

The reasons given for the change were mostly bogus, because it’s obvious to even a casual observer that the new system makes it more difficult to obtain skins without spending actual money. Your point about the loss of collectible cards as a tangible reward is a good one, imo. I know I used to enjoy seeing what card I got when one dropped after a match. Getting 5 or 7 glory once in a while just isn’t the same at all.

Agreed. 100% miss the cards, the collection, and the voice telling me the rarity. There was a certain thrill and positive reinforcement tied to a growing collection. This new system entirely detracts from that.

Making blueprints craftable by essence would do wonders.

Sell essence and BP too. 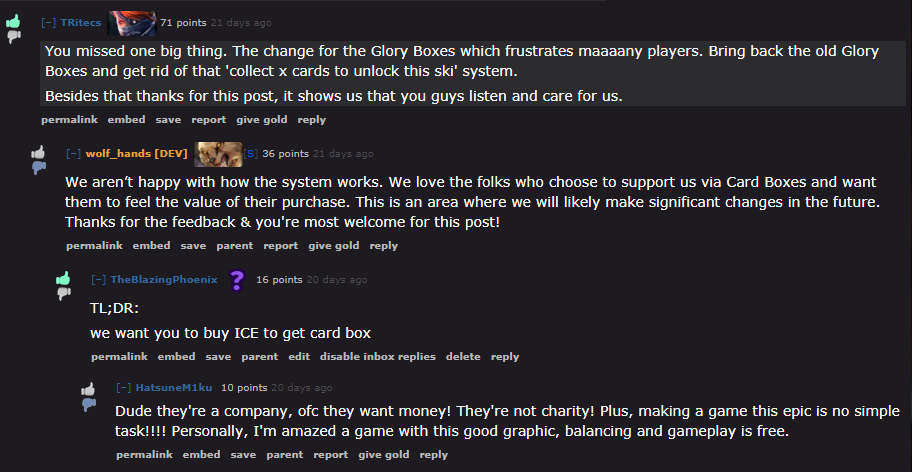 I expect to be disappointed opening a free or quest chest. 20 glory isn’t very exciting. There needs to be some way to target a skin you want to craft, cause right now I see no way a free player can obtain skins in reasonable time frame.

I spent a bunch of money on skins today, which I guess is what SEMC wanted. Just feels like a bad move when the card system wasn’t really complicated at all.

How many blueprint that you’ve got after this patch dropped?
*insert nothing in the air meme

Anytime they’re “improving” a system, it’s at the expense of the players.

Depends on your frame of mind. I got 6 legendary skins I wanted which I could not make in the old system. With essence left. That was not at my expense.

Blueprints can drop and can be bought rng style for 250 ice which is not that bad.

Talent drop rate has improved a lot too. 4 epics 1 legendary just this patch.

Skins are more pay to get but brawl mode is now less p2w which greatly improved my brawl experience.

Indeed. Which is precisely what people have been trying to explain to the Semc-needz-moneyz crowd. And basicly everyone has been saying for year Semc needs a better reward system. And yet, here we are

How many blueprint that you’ve got after this patch dropped?
*insert nothing in the air meme

Not defending the system here, but they do drop. I have been doing every single quest to see if you do in fact get up to two blueprints per week and I got four so far. All dupes of course.

I don’t think either system is better or worse. I just think the old system was more engaging, more fun and more easier to visualize your skin crafting progress.

Blueprints all look the same. essence are just little pink glowing things. its just no fun.

They are and have always been exaggerating the truth, and taking advantage of what was a minor issue, to turn it into something else. SE Skins for example, I seriously have never heard of anyone complaining up to the devs/support team themselves that they want the LE skins to be resold, they took this minority, relabelled them as “A LOT” and threw it as a reason to resell the LE skins. This, was another example. Making use of the minority people complaining that it was tedious to break down 300 common cards to serve as a completely different purpose.

This came back and bit them. TBH, SEMC makes lots of simple things needlessly complicated. I think they have a great thought process. I listen to their explanations and they are solid. They clearly know what they want to do, but I often feel it gets lost from concept to finished product.

They made this elaborate, overly elaborate, skin convention. Tiers, then essence to grind for them, and a ton of different cards, with the tiers consuming their own tier cards plus the previous ones. They abandoned that for a simpler system where it was just one stack of cards per tier.

Now they overly simplified it to the point where they boxed (puns are cool) themselves into a corner. The only way to motivate people to grind for skins is to hand them blueprints. The essence being so simplistic doesn’t add anything over the blueprints because of the rarity disparity, in that, once you have the blueprint, you’ll definitely have the essence to use it. So why have both if they wanted to keep it simple. The essence cannot be made nor can it be exchanged for anything like the old system. So it only serves as modest gate keeper should someone out there actually happen across a blueprint without sufficient essence (like 1:1m I feel). Which will only generate bad blood because blueprints are impossible to get. Once you get one… which is like FINALLY… now you have to wait to get the essence for it?

Just do away with essence if you want a simple system. Or include both but provide a way to generate blueprints so people can actually target a skin. Make them hefty if you want, but still, giving the option to the player to forgo a blueprint for a skin that is thrust upon them would actually go a long way to bridge the old and new systems.

I get it. They want revenue. Can’t blame them. But then make a totally simple system and for the early game adopters, give them a windfall but make it clear that the party is over. That would quell any bad blood (to the extent you can quell all bad blood I mean someone is always going to get triggered).

I feel like if they implemented this a little better, it would be tweaked and fixed easily. Now they have another mess on their hands and what are you gonna do? Upping drop rates won’t help those who purchased skin chests.

It honestly feels like everything is just going to go to loot boxes with terrible RNG that is aimed at just fleecing people. I really hope the industry just bans those things because they are literally the worst thing to happen to gaming. I mean what are you teaching kids… hey gamble your parents money away… which is exactly what it is. I guess every few years Freemium games hit a low blow…