Not everyone likes the idea of playing a rank for balenced matches. One reason that noobs dont like VG is because who wants to play against a team of VG silvers when then only mode ( when u dont have 15 heros) is causals.

I absolutely hate Ranked not because im trash, cuz im not, but i rather relax and not become sweaty for a game. Now ik there alot of people who love to grind and use alot of time doing that but im not one of them. I absolutely hate people who use their rank to prove a point, u cant use a title to represent your skill. Not the point though of this post.

Even though its casuals, its shouldnt be this unbalanced. I would rather wait in que for a balanced match than this. Yes this would make long que’s but atleast it’s enjoyable to play against a team that you know u can win against due to the equal amount of skill. I could go on a limb to say that AOV has a better matchmaker when it involves Casuals.

But that short cut i assume that VG decided to use makes noobs look away from VG.

Yes, im SA silver, i dont want to show the builds because that alone is atrocious and worth another rant by itself

Just 300 elo…
And I am here, playing with this in ranked.

Yep, he used Idris, he fed.

Just 300 elo…
And I am here, playing with this in ranked.

Yep, he used Idris, he fed.

@RiseChu this sums it all up we are already in a shitty position with ranked.

Whether or not Casual is a joke to you, it’s @RiseChu’s preferred game-mode - and incidentally, one has nothing to do with the other.

So he’s perfectly within his right to complain, if his experience is a bad one. Especially as that reflects the dreadful sloth of mind-numbing matches of everyone else in the same predicament.
It’s ruining the game not only for veterans who can’t be arsed with ranked in this environment, it’s also ruining the game for all other players who are paired up with salty T9-T10s , who can’t get a single normal match anymore.
That includes genuinely new players, who get thrown into matches with rage-pings flying everywhere, because they get slapped silly by that T10 silver duo on the other team. That’s going to keep them playing, don’t you think?

This shit needs to be fixed. And fast.

Casual should have a proper MM, keep in mind its the very first thing new players experience, so if the bad MM leads to a really bad new player experience it would heavily damage the growth of the game as those new players would leave. Also, its a mode that even if we dont see it, its played more than ranked.

The first year playing vg was all casuals few ranks and I hated ranked
But casual was balanced that time because people used to play it
That before battle royal and around battle royal , I don’t remember exactly but games were good and learning was good , unbalanced matches make you learn nothing ! , I agree casuals are important ! Everyone practice before you rank ! 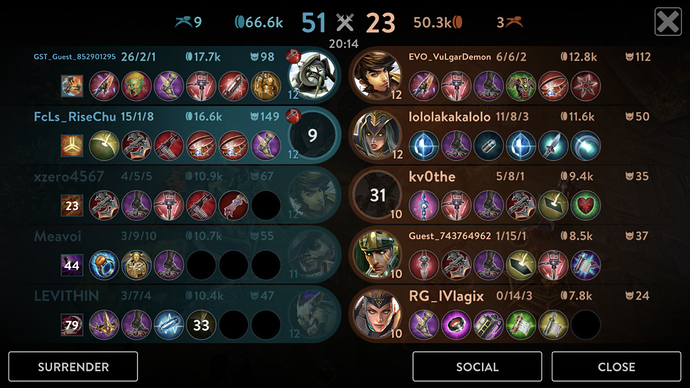 Severely beating noobs is not a great way to gain new players and it DOESNT HELP THAT ITS ON A CASUAL MODE WHERE MOST NOOBS > HAVE < to play. 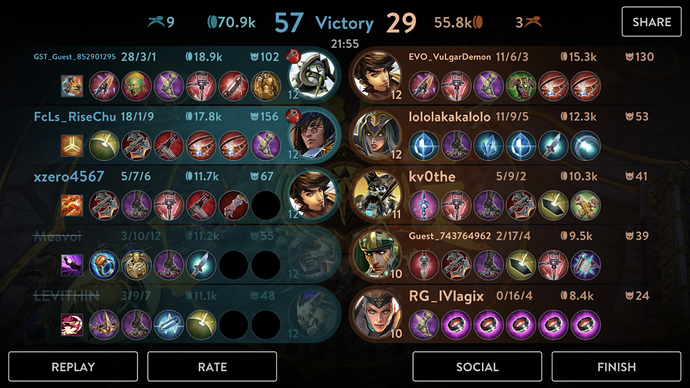 Ranked matches matter too lol, not to semc apperently

Fun matches just keep coming. I blame myself for losing jungle there. Skaarf was positively not playing at his best, but I didn’t pay attention.

And what do you do, if you trio-queue as T10s in Casuals and fight randomly assembled new players? You also behave like maladjusted individuals and don’t destroy the Vain. Yay! 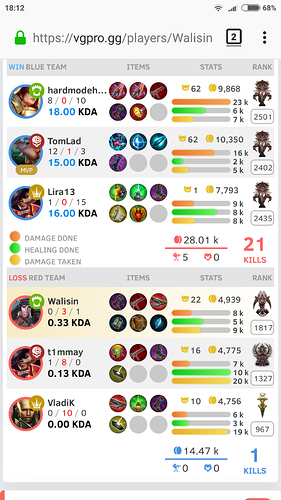 Please obscure the names so as to avoid player shaming.

Also, matchmaker has obviously just given up and is phoning it in now.

'wish that I could, but I lack the image editing software required to perform such feats of heroism on behalf of people who should know better.
I did edit the post, though, in an attempt to make the incident appear less shameful for those involved?