I recalled something you guys said. When cards were changed into blueprints, It was said card art will return in a different form.

I miss the amazing card art we once had, such as Cath’s L card. It’s probably impossible to know which players had which cards at this point, but I just wanted to make this to see if anyone else missed card art and want it to come back, maybe as trophies or something. 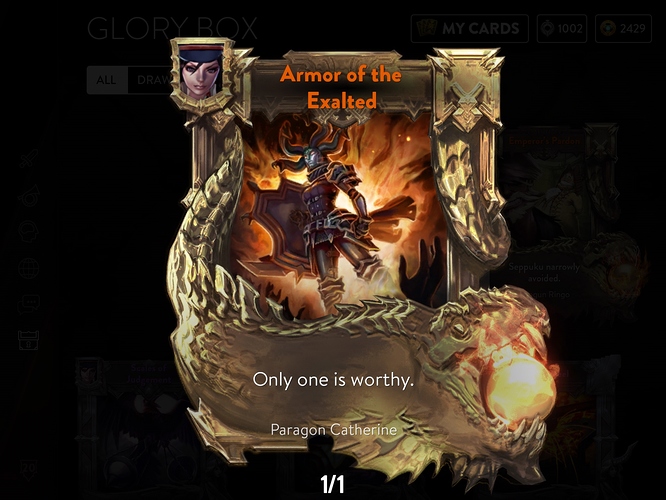 Loved, loved, loved the cards. So disappointed when they took them all away.

cough cough “they can use it as profile pictures” cough

Thanks a lot for the reminder… even though I’m not exactly surprised nothing became of those promises.
'used to save the cards I liked myself, even for skins I had already crafted. Somehow they added flavour, for me. The text passages were so super minimalistic, and still carried some sort of message.

Considering they are focusing on the game itself, and not extras, this is not shocking.

Not that I dont want the art back in some form, but its not a broken promise when they said some time in the future. Barely been 6 months yet.

The counter-argument is that things such as the card art, the lore, etc. DO in fact improve the game’s quality through creating an immersive experience & world that other games lack.

While I agree, I am speaking about the quality of the actual game itself. Not the UI or other aspects outside of the game being played.

While I agree, I am speaking about the quality of the actual game itself. Not the UI or other aspects outside of the game being played.

But that’s the point, isn’t it? SEMC seems to now believe that outside of the game play, little else matters. Many people (myself included) feel that this is a very big mistake, because it’s all these outside-the-match touches that get players immersed in the game’s world. It’s part of what keeps people interested and coming back, because otherwise, without them, it’s just another MOBA, though with better graphics.

In the end, the gameplay is what matters.

As much as I dislike the loss of lore, and other art related awesomeness, I am happy that they are focusing on the gameplay instead of unnecessary things.

In the end, the gameplay is what matters.

Without good gameplay, the game would be doomed, of course. But as I said above, VG needs to distinguish itself from its much larger competitors – and SEMC seems to be abandoning a lot of what made VG unique. I think that without the lore, the art, etc., there’s little to draw someone to VG versus picking a more popular MOBA like AoV.

Please don’t think I’m picking on you with my repeated replies, btw.

Obviously a lot of folks (and SEMC themselves) agree with you. But I definitely feel that the out-of-match things that made VG special are just as necessary to its ultimate survival as the gameplay itself.

As much as I dislike the loss of lore, and other art related awesomeness, I am happy that they are focusing on the gameplay instead of unnecessary things.

It’s counter-intuitive, but I think SEMC managed to provide fairly good core gameplay all along. Not all releases were exactly equal in terms of balance, but most were enjoyable.
The actual issues have been technical all along, be it the match-maker, server stability, net-code related, plain old bugs - you name it. All of that impacts your gameplay, but it’s different departments altogether.

Now they are minimizing what they’ve been traditionally bad at, which is the out-of-game-experience. But that plays a huge role in player-retention, as Hazeleyes mentioned.
If you look at other MOBAs, man… I remember the sort of statistics I could access from within the client, even during SMITE’s beta. I could click a hero and see my win-rate in different game modes, all sorts of stuff. That actually prompted me to play and practice, get better, made me feel involved.
According to Nivmett, SEMC deems that sort of thing a waste of resources.

Coupled with a much better social aspect, that’s what keeps people coming back to MOBAs. And it’s what AoV and other contenders seem to excell at.
So why not look at what they’re doing right? Keep doing what you’re good at (and that very much involved lore), and improve the areas that are lacking.
Instead they’re dialing back on all accounts, and just give up on half of the equation.

That’s what they’re doing right now and I don’t like it.

These little touches like the card art which referenced lore (Dr von Hayden anyone?) made the game unique to me. Now Vainglory is turning into just another mobile MOBA, which may be where the money lies which is good for SEMC and I’m happy for them, but it just feels like the game has lost its soul.

Sovereign’s rise feels rather generic too - it doesn’t have the personality the Fold had. I loved the steampunk aesthetic!

And don’t get me started on the UI. Though it’s drastically improved from earlier, I still miss the old UI.

OmG yEssssss Have u seen the ui with the koshka splash art as the main page. It was so smooth and TOTALLY unique.

If we are speakin about the recent but old ui. It too was totally unique. i would pay for it tbh

I dont think you are picking on me.

I do agree with you, and hope they bring it all back in the future. Especially lore, its one of my fave things about the game!

I just also understand the need to trim things like lore development, as realistically its like esports. A lot of love for it, but from a small segment of players.

But if this is the way they are going, they best get this game so buttery smooth that real butter is jealous . Haha

Anka has no lore and thus is the least interesting hero so far.