Can we have a new topic called "Show your match making disasters"? 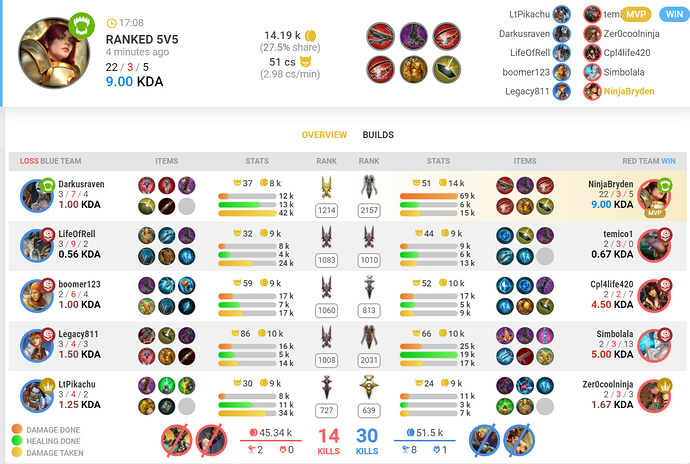 image.jpg1345×906 406 KB
Can’t post this on salt mine cause we won, but LOOT AT THIS! Not even fair and they’re against MY WP GRACE!!! I think I just made 5 people quit VG…btw all my deaths are from the entire enemy team focusing me, but still mostly having half of their team killed before I fall…also by the end when I shattered the vain using minions I forgot I had flask up against the Ardan, so I could have lived .-.
2 Likes
NinjaBryden April 13, 2018, 9:22am #2

Also I was duoing with a guild member The other POA, so having that extra efficient player allowed my to REALLY blow the enemy team out of the water

This is a perfect example of Elo Hell VS Elo heaven. Those newbies would’ve been happy to have 2 POA’s playing with them.

Yeah good shout, I’ve just stayed to play 5v5 again and the matches are a joke… no balance at all, everyone tier 5 to tier 10 in the same match! Can’t be enjoyable for anyone…

I think they’re only showing 3vs3 rank not 5vs5 despite it being a 5vs5 match, because when I checked mine it shows my 3vs3 rank despite my 5vs5 rank being much higher (T5 vs T7).
Either those people could’ve decayed their 3vs3 rank or are just better at 5vs5.
Just a possibility.

I think they’re only showing 3vs3 rank not 5vs5 despite it being a 5vs5 match,

Currently only 3vs3 rank is shown to players in anything in game and in the API. With 5v5 it makes it difficult on everyone because 5v5 is more tatics rather than mechanics like 3v3 which creates a rift in players being there mechanically but not hae the tatical skill set required to win a lot in 5v5. You also have the issue of nearly starting over on tiers they will eventually level out

But this is still a massive gap in skill tiers in 3v3. Maybe if we had a bunch of t7+ players in the game it would be fine, but these are tiers 2-6 which is ridiculous

If u are tactically good in 3v3 you should be able to transition to 5v5 decently well. If you are tier 3 in 3v3 that should be an obvious sign of being ACTUALLY super bad at the game 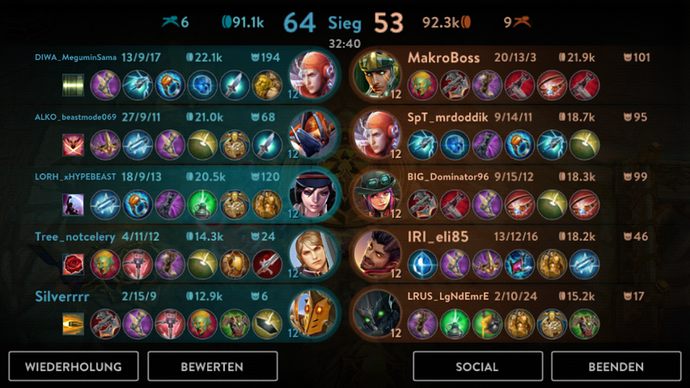 They gave u Tako and picked CW in soloq. They deserved the loss

Even if both teams had 2 poa players, that game will still count as bad. The skill of all 10 players should be similar, otherwise the fairness and fun will fall apart… even if the overall math skill is the same. I am sure I don’t need to dive deep in explaining why as it’s obvious.

Yeah it’s like 4 tier 2s and a t10 gold going against a team of tier 5s. Even if one team has a super broken player since the others cannot hold their own AT ALL it effectively becomes a 1v5 and the VG player will be overwhelmed having to hard carry every lane and the jungle

@cha0z what you are seeing is 3v3 rank. Anyone who has played a 5v5 before going to vg knows that 3v3 is all mechanical while 5v5 is all tactical. Mechanical skill can help but won’t carry you far if you can’t; rotate properly, have map awarness, use scout cams, split push. In 5v5 roles are more blured with you having to play all at once.

Not only that, the better players will have hard time to sync with a lot weaker teammates + will feel out of place in everything = not fun game for them. Diff skilled players understands and play the game differently. Even 2t9,2t5, 2t3 for both teams is bad.

Did you guys just run into each other ?

You put argument we all know too well, but I wil talk as a fact that all my VG friends are in 5vs5 where they are in 3vs3. My friends are t7+ i.e. where there is objective play and underatand of the game not only mechanical skill. Those understandings transition quite well. Stop talking like objective taking, rorations and so on did’t exist at all in 3vs3. Yes, they are deeper and more complicated in 5vs5, BUT that’s the main reason we wanted 5vs5 in the first place. Still, they existed in 3vs3 and every competend player found them out to good degree till now, and every t3 player in 3vs3 is still not underatanding those concepts.

Also at the end of the game the mechanical skills are still dominant. The lanes will be won, the jungle too and this leads to gold gap and so on. If you have in lane t10 vs t6 mechanically, even the perfect team can’t do sh*t as he will rape the helping captain or jungler too 1vs2 and still push, even hold it’s own and the lane 1vs3. And while everyone helps him - lanes, jungle, rotaions and possitions are left unatteded.

Won’t go deeper than that, but I still have to see a t10 players team from 3vs3 to lose to t6 team in 3vs3 ranking. Real t10 players are not just mechanical skill and to state that is underestimating them all.

Well put right there. Macro play is very important to anyone t9 and above even in 3v3

3v3 never will translate as well as you think to 5v5. You obviously have not played much if any other moba. You keep mentioning t3 like it has any bearing in your argurment which it has absolutely none. I have been playing moba games since dota the warcraft 3 mod even played a little aos. I came into vg thinking it would be an easy transition and playstyle would stay the same wrong 3v3 is a different game completly mechanical is 80% while 5v5 mechanical is only 20%. I also assumed going into ranked vg that people would know what they were doing wrong . I barely bother with ranked anymore because it is unplayable you either get a team of trolls or a team without any knowldge of strategy