Anyone remember the various “Road to VG Using only X Hero” threads?

Well, a few days ago I made another account for just messing around because both my accounts are stuck in T9 and I’ve been tilting a bit lately. However, the very first chest I opened - the one you get for entering an email and password - gave me this surprise ( which I don’t actually have on either of my other accounts 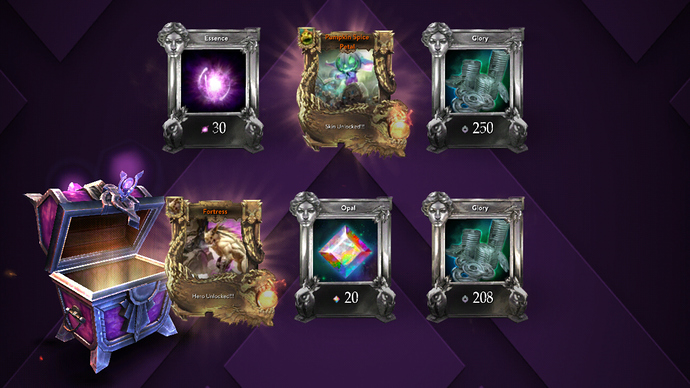 Well, from there I just knew my new account was destined for greatness. I promptly named it MoosePetal, and it will be climbing it’s way up rank using solely Petal - for now 3v3 because it unlocks first. I’m not saying I will make it to VG because I have yet to do so on any account ( RIP ) but I am saying that I’m hoping it’ll be fun and you all will enjoy it. Or not.

Either way, Petal is so under-picked that I’m not exactly fighting to insta-lock and you can stop reading whenever. Cheers.

Wow i have never got a hero from any chest lucky

I loved those threads, please keep doing this!

Just so you know a new account takes 10 wins to reach t6 lol. I got to t7 at 33 wins(including casual)

Once you improve you can easily climb up!

You do realize that you are what is wrong with the match maker right?

I like threads like these but people who smurf ruin the game for everyone. Your allies get boosted your enemies don’t stand a chance etc etc…

Yeah… don’t wanna be a party crasher, but smurfing does suck. Unfortunately there is zero measure to prevent it. I can proudly say that i’ve never made a single smurf and will not. There’s only 1 account. and if i " tilt " as OP describes it, i just play casual or private, not unload my salt on noobs.

Same here, good or Bad just one account. Just encountered a smurf and there was no fun to be had.
If you win you don’t gain points. If you lose you lose a ton of points.

There used to be anti smurfing measures…

Oh really? What was it?

and btw, it’s to the point where it’s absolutely normal thing to do. I don’t judge anyone, but just… nah.

It used to be a bannable offense. Both main and smurf could get banned.

Nice! Good luck on your journey to Vainglorious as a Petal one trick!

I’m pretty sure those first chests are rigged…sigh must be nice to have an SE skin though on the other hand we older players already have a bunch of (hard earned) skins and essence.

@Xaldarian @Dachigenius I mean I wouldn’t say I’m unloading any salt on noobs. I agree that smurfs are generally frowned upon as they seem to take advantage of lower tier players. However, I’ve been super positive and have answered questions with friends I make after matches. In fact, I have already talked more in this smurf PM than either of my other two accounts. Even if that still doesn’t make up for me playing in a lower tier, I will be out of lower tiers soon.

Selfishly, I just miss ranking and watching my VST move, but it just has yet to move from T9 on either of my “real” accounts. Apologies if anyone has an issue with that, but one trick Petal is actually kind of fun. If anyone is a similar rank and feels stuck, feel free to hit me up - I’m on the NA server and you know my IGN.

Are you thinking of account sharing? I’m not sure bans have ever been a thing for smurfs. The devs use them to test match quality, and most of the highest profile players have been spotted on-stream using alts since as long as I can remember.

As for these kinds of threads… I like them! But only if they avoid shaming low-tier players, which they sometimes can, if the OP isn’t careful. If they’re about something specific, then I think it’s ok, and can be really helpful! In this case, the theme might be, “How 2 Petal Thru the Tiers” where each post reveals something Petal-centric. What made her a good/bad pick for the match, how were the synergies and counters, were there elements of Petal’s kit and playstyle that made the match better or worse, etc. I think as long as the thread is about learning Petal, teaching Petal, and not just wrecking noobs, then it’s in good faith.

I’ve been wanting to play Petal recently, so I’m excited for some good tips!

MoosePetal? is this because you’ve already Done Fortress to death? you unlocked Fortress as well…

OwO PETAL IS THE BEST new skin and buff next update too use those. I think you will be able to get quite far on there because petal has been known to destroy uncoordinated enemies which you are likely to get in solo queue.

What are you going to in games that they ban her though? And have you thought of roam petal? The buffs will make her even more viable.

Also. I will try and do this too, although it seems pretty hard since my highest is t7 gold

btu on malene because uuuuhe i want to get good at her also my leaning is below par ;_; so it will help me improve

I was experimenting with a build a while ago, SG DE SG BM, do you think you could try it out? Very expensive so it requires you to snowball pretty heavily, but it’s very, very strong. Of course if you get shut down early you’ll never get to complete it, it relies on your getting far ahead.

There were actually bans in place, you could report people for smurfing because they were ruining matches. That was ages ago back when SEMC was more strict and more straight forward. Way back before seasons and before LPQ.

I rarely forget stuff, that is kind of my thing.