Balance based on winrates

So based on winrates several heroes are in need of a buff. This is semcs way of balancing heroes now that Nivmett is gone it is their only angle of approach.

Lance has received several buffs in a row despite not being bad at all. Rona has had this happen too in the past before 5v5.

I see more and more Lance mains turret dive and murder people with defense while going glass cannon attacking under a turret. 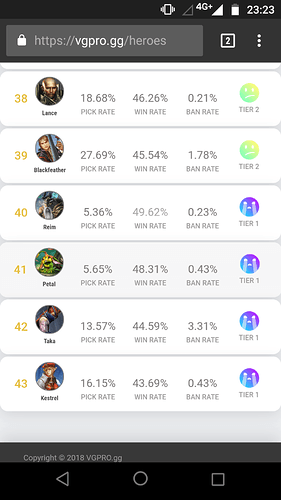 But I beg to differ, games are becoming more and more skewed this way because random buffs to hero elements are given instead of thoroughly researched changes.

I worry for the overall balance when Silvernail and Kinetic just get a tap on the wrist instead of a real nerf.

Games are so onesided sometimes that people opt to afk or surrender very early. I blame balance+matchmaker for that. The in game experience is getting worse and worse…

What are your thoughts about the game balance right now? Are key problems beinh addressed? Are they addressed in the right way?

I know you play Catherine and Flicker top lane but might I suggest playing GJ, Lance, and maybe even BF top against Kinetic? You will begin to realize that Kinetic’s light tap is a pretty big tap and she’s not actually even that overpowered. I play both the bot and top lane pretty consistently and imo Kinetic is overrated.

Silvernail actually has a pretty high skill cap and once you master CP to an extent your WP Silvernail goes through the roof. But I feel like he needs some serious tuning and reworking to make it 3 stakes instead of two to create a tripwire.

I’ve personally had a couple of comeback games that were literally because people listened to my pings in the very end. Like I had this Reza who was 5/1 in the 4 min mark and he wasn’t even doing anything with his advantage. The Rona top lane was toying around with her food while I’m trying to get an advantage and mow down the lane with Silvernail. Literally all they did was just dive and get a kill on a squishy and die. During teamfights the Ardan would Vanguard Reza/Rona and leave me having only the protection of my tripwires. The moment we lost one major teamfight I pinged the Ardan with a target and pinged myself with a target and warning signed Reza twice. The next teamfight the Ardan literally peeled all of Skaarf’s As and gave me a Vanguard so I can get the speed boost. He also used his ult to trap them and I put a trip wire to punish. I ran a classic double crit build and blew everyone up.

Honestly I just feel as if the playerbase is just really bad at the game, and only a few individuals only listen to pings without tilting.

The out of game experience is worse than ever and tbh I though hats were a nice thing once I realized how exclusive the common/low tier hats are. Like to get one hat you have to spend at least 500+ opals.

All in all the ingame experience is pretty subjective while the out of game one can be agreed on that it is pretty bad.

I get a captain who refuses to buy igc and doesn’t peel.

Allies who surrender at 10 min mark without my consent.

Half of VG bronze is absolutely clueless…

worry for the overall balance when Silvernail and Kinetic just get a tap on the wrist instead of a real nerf.

I really hate the fact you can decline a surrender vote and it still gets passed, especially in 3v3. I mean, in 5v5 casual, if 4 players are fed up, then it’s kind of understandable, but in ranked, the amount of times my team has had a decent chance of winning and then just gone for the surrender actually pisses me off. Not to mention 3v3, where just 2 votes passes a surrender. It tilts me more than anything (excluding toxic instalock SAW mains of course).

Thats because 2 players>1 player. I dont see anything wrong with that. Its frustrating? Sure, but its also fair.

This meta is as stale as British comedy.
I’m basically a full time Onmyoji player now because the metas in both of the competitive modes (No, Blitz doesn’t count.) has been the same for several patches.

5v5. Don’t fight the enemy, steal their jungle. Bot laners have an easy lane but usually they don’t matter unless they get extremely fed, top laners serve as a distraction and they usually don’t matter unless they get extremely fed or are Cath/Grump who have enough cheesy value in their kits to be impactful in fights with full tank. Turrets hit you for 500 damage at level 1 (excuse me what).
The only think that matters is which Mid/Jungle + Captain takes jungle harder. You’ll see games with 5k gold differences and 2 kills.
Generally comes down to which team has the bigger idiot.

3v3. Pick what’s OP and throw yourselves at the opponent, hope you win. Snowballs are harder here but it’s only because of the incredibly inelegant solution known as the crystal sentry. Turrets can get taken by the second minute, and do no damage.
Generally comes down to who has a decent player on an OP character.

Plus, due to the direct nerfs and buffs to towers, Kensei can say bye bye to his status as a top tier bot laner.

I’ll come back when I can play YEETS. RNG absolutely screwed me over on that one.

You want to surrender fine I don’t agree so I shouldn’t take the penalty for that.

But I can be 7/2/7 and my team surrenders and I lose 16 points on a perfectly winnable game.

I downvote people who surrender. I have more respect for an AFK than a person who wants to surrender.

At least the afk grants his allies forgiveness…

1 player shouldnt have priority over 2 players as no player is by default more valuable than the others, if you cant see that then idk what else to say.

Surrendering is normal for players who plays a lot and got a goal , like if you are climbing surrendering a hard game going to save time for another game , so the potential to end up with positive score is higher , hard games just giving you tilting and salt , they ruin your other games , some people feel great after ending a losing game with a unexpected winning , for me I feel like I already lost the winning just points added to my rank , the whole game was bad and should be a loss .

Be that as it may for players who can play two games a day those who surrender are the worst of the worst.

It used to have to be an unanimous vote. I find there are way to many people who think the game is no longer winnable at the slightest mistake. We can be 5 turrets to 1 up and about to win, but then the enemy captures the Kraken… oh no gg we can surrender now. this pisses me off no end. I’ve had people surrender on me in 5v5 once because the enemy captured Blackclaw, despite me being literally half way through destroying their crystal.

Most of the people in t10 even don’t understand what late game hero/comp is or that if you drag the game long enough - the turrets down won’t matter that much.

Fair point, I have had matches where the enemy team has won just by dragging the game on. My point is just that I’ve had many surrenders in easily winnable situations.

I was just adding to your point, all you said is true.

But Petal and Reim could use some energy buffs.

I agree with the overall statement of the thread but I think the meta is what really causes some heroes to have low winrates and others to have high winrates. I think SEMC needs to put more effort into balancing the map than the heroes. I don’t really feel like any hero right now is OP or UP solely because of their kit but because their kits just works well in the meta.

Balance is based on win rates but with different skill tier filters. VGpro.gg win-rates are based on data where both teams in 5v5 ranked are over 2000 VST average. Lance ,Blackfeather, and Kestrel for example, are balanced with lower win rates at this level because at VG Silver plus their winrate jump way up. This becomes toxic for competitive play and very high tier play. Heroes like saw are terrible at high tiers, but are balanced for low tiers (3.7 Saw nerf) because their win rate is a toxic level at a certain skill range. When they do not have outlier cases like those previously mentioned, heroes are balanced around win rates in the Tier 8 -9 range where players have a general idea what they’re doing but are not mechanical gods. Data is still only one part of the balancing act. How heroes feel, community perception, and other things still influence what heroes get balance changes.

I would add, that the newer heroes with super loaded high skill cap kits are much more difficult to balance across a wide range of skill tiers.

But it feels at times the devs don’t even know the hero that they are balancing. For example BF is complete doodoo and always will be in 5s until he gets some sort of defense buff. Why the devs are so reluctant on buffing him idk? They have literally one OP hero per patch or they stay OP for a long long time. The last time BF was OP was when he was bugged. He has the defense of a ranged carry and requires more skill to do damage unlike playing someone like Baron where you just jump and blow people up. But it doesn’t help how the community is always whining about getting “rose trail” back.

Another example is Anka where they gave her a “nerf” by making the autoattack proc instantly and they decreased her B by 5% when people buy AS. Anka is supposed to be played throw dagger -> on point B -> ult (optional) -> AA to proc perk. But people play her as throw dagger
-> AA to proc perk and AS -> finish off with a burst. To fix this they can possibly make her blink not reset but instead her B so people will buy CW instead of AS to proc the CDR with her B twice. Good Anka’s will realize that, the bad one’s won’t. The same way some Reza players buy CW and begin to poke to get their abilities back quickly.

Those are two heroes I can think of from the top of my head but like their balancing isn’t meta changing but I guess that has to do more with the dragon objectives being too easy/pointless to take.

Though I’ve noticed how it’s worth staying in lane and farming rather than contesting the healer treant and it’s become noticeable in the deduction of XP from duoing which is a step in the right direction.

In a 5v5 ranked last night I had someone pick CP BF top lane, (Tier 10) and I thought we were doomed. He went 17-3… BF isn’t doodoo. Anka is a hero who can feel oppressive, but I’m sure she’s a potato at mid tiers, she’s very high skill cap.

They are working on the 5v5 meta in general but do not want to do too many changes in one patch. There is an AmA on Friday about it and what direction they would like to take it.