Introduction:
Attack cooldown is one of Vainglory’s most obscure mechanics, even though it has existed ever since the dawn of the game. This post aims to introduce players to attack cooldown, its different aspects, and all things related to it.

A Broken Myth post has touched on this topic, and while it was great and informative article at that time that introduced this entirely foreign concept, it lacks a lot of pivotal information and is outdated. Hence this post is made to completely expose this elusive section of VG.

Here’s the formula for all you math geeks to calculate the current attack cooldown of your hero:

The Three Aspects:
Attack cooldown (general term of the mechanic) is split into three parts.

Attack cooldown:
It is the time a hero has to wait after successfully basic attacking so that they can start the animation of another basic attack. The hero can move in this phase. The attack cooldown of most heroes is 0.8 seconds.

Vainglory is unique from other MOBAs in regards to stutter stepping. In other MOBAs, such a League of Legends, the attack cooldown is triggered at a set time, whether the hero stutter stepped or not. The only benefit it provides is being able to move between attacks. In VG, if you cancel the wind down animation faster, your attack immediately goes on cooldown. At perfect stutter step, you can reduce the general attack cooldown by up to 0.2 seconds, providing a damage boost not present in other games. 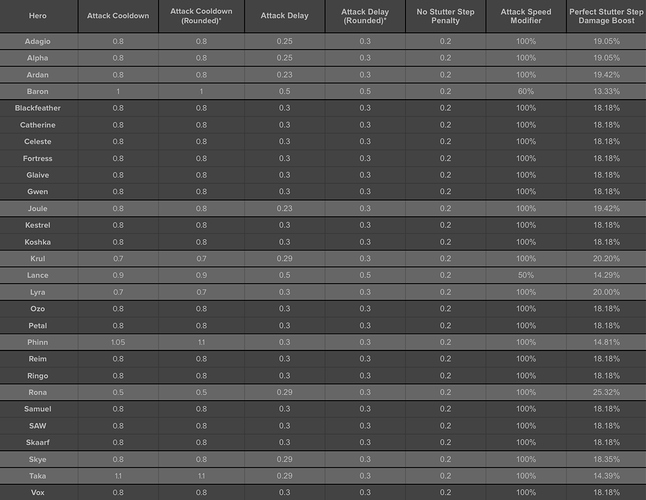 Ability Interactions:
Abilities interact with basic attacks in a variety of ways. These include attack cooldown resets, applying basic attack damage, reducing attack delay, momentarily increasing attack speed, and so on. Not everything is written in the in game description (not yet), so without further ado, let us begin. 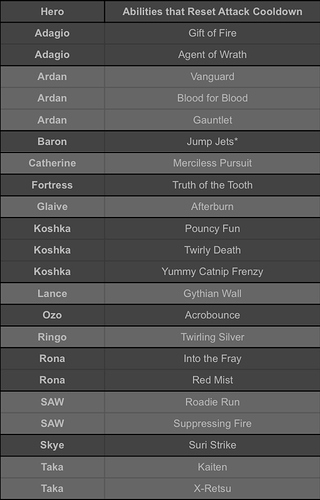 image.jpeg597×931 68.7 KB
*Attack cooldown is not reset immediately. It is reset after the first shot is fired, so you can fire another shot immediately. 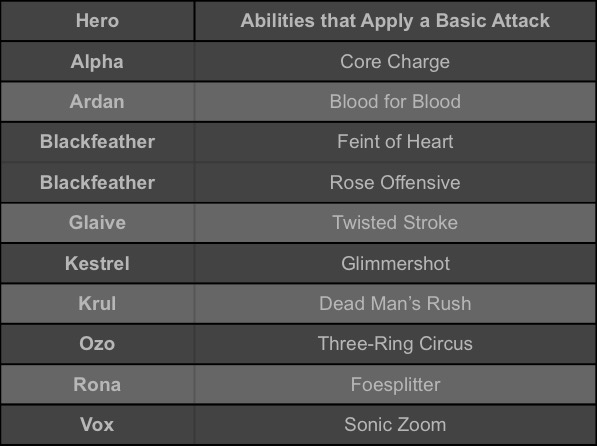 Baron: Jump jets reduces the base attack delay of the first two attacks fired after 2.1 seconds of landing from 0.5 to 0.2 seconds. After the first shot is fired, Baron’s attack cooldown is reset.

Gwen: Boomstick’s cooldown is reduced by attack speed just as any other attack cooldown would. Stutter stepping while trying to fire a Boomstick shot with every basic attack you do won’t grant any damage boost. This is because the cooldown begins at the end of the attack delay, whether you stutter step or not. But this doesn’t mean you shouldn’t stutter step of course! You still get the benefit of moving around more between shots.

Kestrel: Delay before A arrows form again is similar to Thunderstrike. It gets reduced by attack speed. The difference is that Kestrel’s scaling has a 50% multiplier.
So 3.3/(1+bonus attack speed*0.5). Cooldown of Glimmershot is never increased by Atlas.

Lance: After activating Combat Roll, the first initiated attack in two seconds will have its attack delay reduced to 0.3 (down from 0.5).

Lyra: As stated above, Lyra’s attack cooldown is 0.7(attack cd)+0.3(attack delay)+0.2(No stutter step penalty) which is 1.2 seconds.
If Lyra chooses to unleash a light-heavy basic attack combo, her attack cooldown will be so: 0.3(attack delay of light attack) + 0.9(attack delay of heavy attack) + 0.2 (No stutter step penalty). In addition, Lyra’s next attack is placed on an increased cooldown of 1.2 (up from 0.7). This means that stutter stepping provides only a 8.33% (down from 20% damage bonus if light-heavy combo is used.

Atlas Pauldron and You:
Atlas Pauldron’s interaction with attack cooldown is another center point of confusion. Few understand how it truly works, but it generally agreed that it reduces attack rate in some way or another. So, let’s go straight into the details.

Atlas’s maim multiplies the attack speed of its affected targets by 0.35 (unlike SAW’s Mad Cannon which just reduced his attack speed by a flat amount of 36%). Therefore, it will increase the target’s attack cooldown.

Atlas treats Joule’s B cooldown like it treats attack delay. It can increase its cooldown, but never above the base amount. Kestrel’s reload time, on the other hand, is immune to Atlas.

That is all! I hope you Vainglorians enjoyed this post and if you have any questions, hit me up in the comments.

Credits:
Special thanks to MrTeriyaki for help in testing. HUGE thanks to Zekent for being the most cooperative dev I have ever seen, providing most of the information in this post. This wouldn’t have been possible without them.