“Your Highness, have you ever wondered what is the essence of magic in our world?” 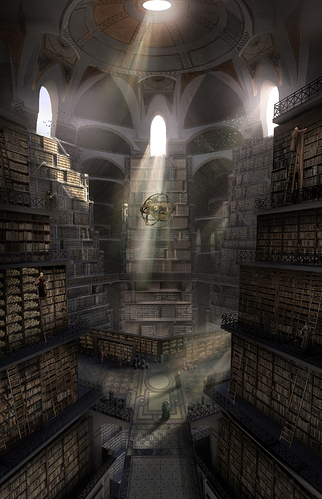 kieran-belshaw-citadel-library-interior-v009-spiralstaircase.jpg1920×2976 1.43 MB
Link to the Image.

The arcane tutor inquired as he glanced behind his horn-rimmed glasses at the student he was desperately attempting to culture.

A smartly dressed boy levitated above him in a relaxed napping position. The boy’s crimson jacket soared above them in an equally lazy circle like a manta ray with the coat sleeves flapping slowly.

After a minute of silence, the boy popped open one eye to gaze at his tutor.

“Isn’t magic supposed to be a mysterious force that just occurs in an entropic state until it can be tamed?”

“That my prince is an ultimately vague assumption that people commonly take,”

The boy lifted himself up and slowly descended to the floor, his interest finally piqued.

“Long ago before magecraft was a distinguished position, many Gythians assumed that magic was simply a random fickle within the grand frame of the celestial spheres.”

He gestured towards an armillary sphere from the eastern nations that was resting on a pedestal, the various glass rings detailing the fixed stars in orbit, gentally clinking with the enchanted mechanism.

The crimson jacket stiffened before slowly floating down, landing neatly onto the boy’s shoulders as he crossed his arms and frowned.

The arcane tutor begins putting on stiff airs as his voice shifted from the wistful tone of a philosopher to the posh patronization of Gythia’s academics.

"While the theory itself is convoluted and has yet to demonstrate credibility we now believe that magic is a manifestation of one’s true self in the purest sense of the word.

At this proclamation, the boy swelled with skepticism but his naive curiosity managed to stifle his retort. Instead, he questioned his tutor further.

“What do you mean by one’s true self? and if that hypothesis was credible couldn’t that mean that anyone has the potential to wield magic without the use of a medium?”

“I guess phrasing the term as ones true self is a bit… abstract. Perhaps calling it a person’s magical essence sums it up better.”

"The theory first started when a natural philosopher looking into the random characteristics that seemed to crop up in mageborn; most notably why they’re magical abilities could never be inherited or combined no matter how they interbred.

The tutor paused indulgently smiling at the boy.

“Have you ever wondered why there are no two mages with powers exactly alike?”

The boy stroked his chin thoughtfully with his gloved hands at this insight. Now that his arcane tutor mentioned it, none of the Gythian mageborn had similar powers. Even the mage guild themselves were diverse and exotic with their power despite their strict management of arcane bloodlines.

“No professor I have not considered that.”

“That is because everyone is unique in their essence and their outlook on the world. I mean that’s why it was to no one’s surprise that the Archmage’s child would turn out to be the first ever dark mage in Gythia’s history!”

The man chuckled softly for a moment than coughed before continuing to speak addressing the boy directly now.

The tutor turned and paced around the room which had endless walls adorned with bookshelves made of ash that reached up to to the seemingly endless skylight above. The stained glass depicted the ponderous cycles of the sun and moon along with countless constellations in a fixed array.

“Everyone is the architect of their own power and their fates, even if it is a minor cobblestone of a vast cathedral or a minor ripple in the pond of entropy.”

The boy pondered those words for once gazing at the alchemical fire that was at the center of the room.

“Many people describe the magic and the arcane only in what they can achieve with it, however, few people ever describe the feelings and essence behind that magic and thus cannot be considered Magus in the true sense of the word.”

The elderly man finally stopped speaking and looked up once more at the boy.

“Well that’s enough theory for the day, how about we turn our attention to its application?”

The boy smiled he outstretched one arm and formed an arcane symbol with the left hand, while his right hand drew back an imaginary projectile like an archer.

He concentrated and remembering what the professor had just told him, focused on his essence. In his mind, a gilded bird was interwoven with the touch of King Midas glided towards him.

He released his right hand and a golden bolt erupted from his arcane sigil, the shaft a brilliant double helix intertwined.

The angular head of the mystical missile gave off shimmering echo of richness as it traveled at a fair distance before dissolving into the ether from whence it came.

The tutor gave his student an indulgent smile once more.

“Well done!, well done indeed Prince Magnus of Gythia, I’m happy to see the fruits of your studies bearing fruit at last. We will be expecting great things from you.”

The boy gazed at his tutor and smiled back confident and regal in manner. Slowly he descended to the floor with the gentle fluttering sound of a sephaphim’s wings.

“I have you to thank for your tutelage Elizar.”

Application of Rite and Theory: Addendum to Archive

“Now that you have applied the theory of magical essence, how did it feel when you released that mystic missile, my prince?”

The magical tutor inquired. He gestured with his frail hand the shifting of his robes rustling like autumn leaves.

A book from one of the countless shelves of the Library extricated itself and fluttered sheepishly down into the old sage’s hands. Without any further inquiry or gesture, the pages of the volume flipped to where he wanted.

“Knowing about the essence of magic itself is a start, but to truly get to understand one’s magic is the natural progression for any magus.”

He paused and looked up, Magnus gazed down at his hands clad in white silk gloves. He extended a palm outward and a smaller angular projectile of gold erupted outwards making a metallic shunting sound.

“When I launched that magical bolt, I thought of my heritage and my status as the crown prince, and remembered what my father told me regarding our Gilded Rite to Gythia.”

He looked down at his hands and levitated a small amount off the ground.

He looked up and addressed his tutor’s first question.

“I saw a golden bird fashioned out of intricate gold filaments soaring towards me and I knew at the moment to release the spell. I’m not quite sure what it means, I just went for it”

The book in front of the tutor fluttered its crisp pages once more and he nodded at what he saw. He than looked up from his horn-rimmed glasses at Magnus and levitated into a sitting position.

With both arms he postulated them around his hiked up left knee and floated until tutor and student were at eye level.

His gaze was back once more to one of waxing philsophical. He was about to indulge his pupil with something special rather than patronize the prince lik all the other scholars.

“We’ve talked about the essence of magic but to fully understand that definition we must also know what magic is.”

“But I thought that’s what we talked about already professor?”

“We talked about it’s essence but not the components of magic itself.”

The tutor corrected Magnus smiling faintly without a hint of smugness. Impressive to say the least.

“Magic is in it’s simplest components, simply energy from a source that is utilised in one way or another, similar to technology, magic is amplified by the presence of halcyon energy as well as halcyon infused crystals.”

"The heritage of magic can be traced back to before the dawn of any human civilization according to our chronologists and explorers.”

“Mantras and texts uncovered in the east speak of the mystical beings who long ago roamed our world and died their breath and bodies transformed by the earth into raw elemental power after several millennia.”

"Magic like any power source can be drawn from all around us and than molded to the user’s whim by modifying it’s essence.”

“True magical power is raw, cyclical and chaotic; full of potential. However, since the power must be drawn from a source, something is needed to serve as its conduit allowing it to appear in our world"

"The mageborn are attuned naturally at birth to their source of power and therefore only need a simple conductor to direct their magic.

“For us as magus the sigil and runes are most important as they dictate the flow, form and function of the power that we conjure into this world and therefore we are limited by our interpretation and knowledge on the flow of power”

“Magic is just like any other form of power, it’s in a constant state of flux. If wielded incorrectly, magic can wreck havoc as well as seduce, taint and corrupt.”

The tutor paused at this.

“This is why the more one learns about magic the more we understand it’s flow and learn to respect the cycles of balance that keep them in check. The Churn is one example of power corrupted that taints the natural order.”

The lecture seemed to be winding down as the tutor let out a small sigh.

“Magic is a powerful and wonderous force with mysteries still unable to be comprehended. However, sometimes… perception without comprehension can be dangerous especially with forces beyond real control.”

Magus pondered those words; all of those words carefully. Magic was to be learned but also be accepted without question, to be respected.

“So basically, know thy source of power and thou shall bend it to their will.”

“Yes my prince, but be aware of the cyclical nature of magic as an energy source and respect how wild this power can be without proper comprehension.”

Magnus smiled has he formed a magical sigil atop of his fingertips. He gave a calculated and crisp snap of hsi fingers and a tiny explosion of arcane power briefly flared, illuminating his serene features.

“I will keep that in mind.”