[Anka Guide] My strategy/builds when I play Anka

Just tried her today in casual. Man, she is fun to play but it is very frustrating when you don’t have a premade to play with, since her farming phase sucks. Now, enough with complaints, here is my thought about her.

Position: Jungler only. She has roaming and ganking potential.
Build path: semi-captain (highly reccommended), assassin.
Skill Learn: learn B first for fast farming (A if you using semi-captain build), learn A/B, get 2 points in A first before B to get more range (+0.75 - 9 range in total ). Overdrive B, overdrive A.

1. Assassin path
A. Which item should I build?
Not much in here. I rather stick to Excoundrel’s guide since it comps well with her CP ratio. Priority in order.

B. Playstyle?
Again, not much in here. As Excoundrel already stated, she needs exp to to overdrive her B fast to get kills. She even needs Ultimate to ensure survivability when dashing in. That’s why I want her to play Jungler because in early game, she can only deal 50% of enemy max HP and then, over, she is useless after that. With a hard-carry staying next to her (aka Gwen), Anka and that hard carry can quickly kill 1 enemy hero.

Now, your combo would be: A -> Blink -> B -> AA to maximize your damage.
To escape from enemy, quickly use B -> A -> Blink, and run. With movement speed burst, you can escape if enemies don’t have hard CC, or corner you.
To maximize damage with Ultimate, there are 2 ways:

C. When should I play her and what is her Weakness?
You only play her when you have a good snowballing team, such as having Gwen, Reza on your side. Or having support favoring ganking (Catherine), or having a support who can help you escape when you dash in the middle of enemy team (Ardan).

Weakness: she lacks of CC, and doesn’t have DPS so be careful. If your hard-carry is falling behind, it will be a lost. She even doesn’t have damage to take objectives such as turret and dragon, so only use her when you are sure that you can snowball in early game (while her damage in early game sucks)

2. Semi-Captain Path
1. Hey BlueLycan, are you insane? She is an assassin, why use her as Semi-Captain?
It’s because even though she has bad DPS damage, she still has burst potential even without much items.
So what is Semi-Captain? As Semi-Captain, you will help your team by buying Ultility Item as well. By doing this, the main Captain can focus only on Hard-Carry while you will focus on protecting Burst/Bruiser Carry, such as Rona, Reza, etc. By doing this, you can allow top to be a carry hero, not a protector hero OR if your top is a captain as well, at least you can be sure that your speed when taking objectives are still good compared to the assassin path.

2. Sounds good, tell me the Build

Wait, why Teleport Boots?
Teleport Boots allows you to split push. Since she has her A as great escape tool and Stormcrown for farming, you can ditch her to Top or Bot, farm there and use Teleport Boots to go to 5v5 combat if enemy team see you pushing their lane and try to push dragons.
For more information, you should search League of Legend’s/Dota 2’s Split Push Tactics.

3. Then how to play her?
Basicly it would still be the same like assassin path. However, with this build, you don’t have to care about the Perk’s damage anymore. Keep basic attack enemy, and it worth.
Your combo right now will have more things, like A -> turn on Atlas -> Blink -> Atlas activates (no one can block this Atlas).
With high health and low CD on skills (3s on B), you can still deal good damage while making their carry busy. With one combo, you can steal 75% HP of squishy heroes.

4. When should I choose this path and Weakness?
I reccommend this path because the assassin path is too high risk high reward for me. With this build, the snowball requirement will be lessened and it’s OK for you to die 1-2 times for your hard-carry because your items are cheap anyway. Moreover, as I already stated, with this build she can fasten the team’s taking objective speed and allow Captain to buy more Ulitily things, such as Wards. She even has high potential to split push with this build as well, so you can use the tactics 1-4, or 1-3-1 to push the enemy’s base. Moreover, she doesn’t need to lane A right at the enemy hard-carry since she can A whoever she wants, dash in, B and start basic attack that hard carry.

Weakness: and again, although she is a semi-captain, she lacks of CC. But this can be justified by what Dota 2 says… ‘She supports damage output’… means that in early game you support your team by providing damage to clear camps and taking down heroes, etc. Besides, her potential is lacking late game because of her kits and stats so in late game the only thing she is useful is safe split-push. But remember, her kit still has lots of damage in late game, so watch out if you have to play against her and not having any shield on.

I give all money in Jungle to Glaive. I am a good guy.
Don’t build Halcyon Charger like me. I forgot that the Crystal Infusion gives me 15% CDR 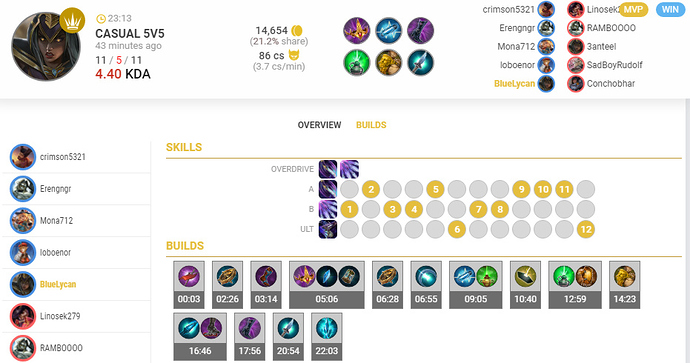 You forgot to mention Tony as one of her weaknesses