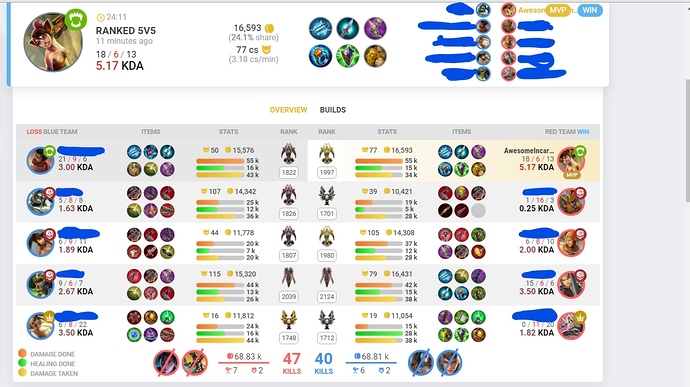 Screenshot (5)_LI.jpg1355×760 280 KB
HO-LEE SHEET. This was probably the hardest vainglory game I’ve ever carried. And I don’t even play Koshka. So let’s start from the beginning. I’m second pick on B side. I quickly indicate mid cp( cuz samuel is broken rn and I’m just riding that elo train). My first pick bans Kinetic and Alpha. Not my ideal bans but whatever it’s fine. Then my boi on first pick on my side instalocks wp saw mid. A bit irritating but u just gotta roll with the punches in solo q, so I lock in Koshka cp jg. My teammates made sure to show their disapproval of the SAW pick in chat, lol. At this point I was praying for a dodge cuz I swear my odds of winning drop by like 75% with a SAW on my team. So no one dodges (hurray

) and we get into the game. My game plan was based around the Phinn babysitting the SAW in the first 3-4 mins while I terrorise the Glaive jg, and to make sure that wp idris didn’t get online. Much to my dismay, the Phinn and saw gave up a double kill to the reza mid lane (how’d that happen) at like the 3 min mark. Around this time I picked up a double kill in the botlane from the ringo and fortress. However this didn’t create a substantial lead for my vox in the botlane and he spent most of the game behind. The reza and fortress started to roam around a lot , picking up easy kills from everyone of my laners. I was on clean up duty picking up scraps from every fight, which helped me stay relevant for as long as possible. We conceded at least two ghostwings and a blackclaw and we somehow managed to defend all of this( we were left with like two armory turrets and one outer turret I think , and I was the only one alive at the end of their blackclaw push). Even though they were ahead, the enemy team seemed really disjointed as I was able to pick up many solo kills on Glaive, Fortress and Ringo when they overextended while split pushing. Our opportunity came at the 22 minute mark when Idris, Fortress and Ringo were doing blackclaw again. I placed a scouttrap and waited till Blackclaw was on its last sliver of health then pounced. You know what happened next

. Recovering from my shock as quickly as possible my team focussed the idris ( he was very scary), with me atlasing him and it was a done deal. We anhilated ringo but fortress got away to lick his wounds. I made sure to infuse then we accompanied Blackclaw to their t2 turret and their armory turret. Reza and glaive put up a valiant effort but they were no match for my determination to reclaim t9 and CP bf’s insane poke. Funny enough SAW was pushing in on their T2 top turret while we shattered the enemy crystals, much to the delight to everyone on the team. I made sure to indicate my frustration with the SAW by spam green pinging him cuz I’m a toxic mofo. GGs
2 Likes
D4rkHydr4 June 20, 2018, 12:44am #2

Why did you get Capacitor Plate

I was trying it out cuz koshka gets barrier on her B that scales for the amount of enemies hit. Plus it gives me energy regen and a little bit of shield for the reza. Not to mention it also synergises with my aftershock. Just seemed to have more value than an aegis in this match.

This could actually make Koshka with Raw CP become very Tanky with a boosted barrier. What is the barrier cap?