Did people honestly just quit the game? I popped back on and there’s a good 8-10 minutes to find a ranked match (I got reset to silver 4 and would really like to farm some ranked points and get outta there) and even BR matches have taken me upwards of 2 minutes (that mode used to be instant-queue pop)

I mean I don’t blame people who quit but ouch

Yeah I noticed it to but I think the more matches you play on the update the less time queue takes. Don’t worry about it too much I went from 5-6 minute queues beginning of patch and now I get matches at 2-3 minutes. MM is probably trying to figure you out and see who you should play against and who your allies should be.

BR is boring now thanks to the changes and the matches feel to long imo.

I get 4-5 mins for 5v5 rank during what I expect are peak times. There are too many modes splitting the player base. It might be time to eliminate BR.

Why not eliminate 3v3? Or 5v5 casual? You realize there are a large number of players who only play brawls, right?

If they were to eliminate shorter games, VG would lose a lot of players, I’m quite certain. The competition has numerous shorter modes (some of which are hella fun – Hook Wars and Abyssal Clash in AoV, for example), and if VG didn’t offer quickie modes, where do you think those people will end up?

Good points. I’m not sure BR is really a quick mode. It takes 10 mins typically. Blitz is 5. 3v3 is 15. 5v5 is 20. It fills a time slot but besides that I’m not sure there is much value to that mode. I don’t think lots of players are playing VG for that mode. It’s a mash of Blitz and 3v3, but worse because games can stretch out to 15 mins with campers.

What VG needs are objective based mini-games.

Build a cone-shaped base defense map with a 10-minute timer. The assault team gets very low respawn timers. The defense team gets two turrets 33% away from the objective. If the defense fights in the 33%-66% part of the map they get similar cooldowns, but if they fight under turrets, they get longer cooldowns. The idea is that you can turtle, but over the long haul it will cost you to be outnumbered. Create vision blocks in the 66%-100% range so assaulters can either split up or clump up. Create an objective at the 50% mark that spawns at 4 and 7 mins. If the assaulters get it, then it gives a rebirth (Roshaun). If the defense gets it, then it heals/rebuilds turrets.

What VG needs is objective based mini-games.

You’re too fast for my poor grammar edits.

Br still has its own charm, it may not be quick but the randomness and lane only game are things that draw people in. I’d say if they were to try do better brawl modes (which they probably will try), put them on rotation from now on so each week the two brawl modes changes or they could do it now only having one brawl mode a week changing between the two or three if they ever want to do onslaught again

So you mean Vainglory on the Switch?

This is a game mode I could get behind.

noooo
no no no…
pls noooooo

I think vainglory as a game overall is growing it’s definitely getting a good influx of new players but the high elo and comeptitive scene are dead. 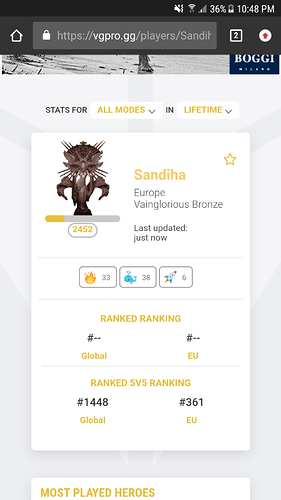 Screenshot_20180619-104144.png1080×1920 294 KB
Here is one good example that proves my point, that’s the highest elo i’ve reached last patch 3 days before the season ended, pretty mediocre but yet i was 360th in Eu. To put that into perspective the highest elo i got in 3v3 was 2581 and i was 600th in Eu.
2 reasons for this in my opinion. First, the esports scene is completely dead, going competitive is wortheless unless ur lucky enough to be aquiered by the few orgs left. Second, the meta is pretty shit right now yes the new balance changes made it a bit a better but the main problem is still there, the sidelane meta is screwed and it’s ruining the game. And of course the shitty match maker and the numerous game breaking bugs don’t help either.
Bayou June 19, 2018, 12:45pm #16

Can you elaborate on the “sideline meta is screwed”?

the map mirroring, the top lane vs bot lane thing where the bot laner has all the jungle pressure he wants while the top laner is by himself fighting a 1v2 battle. The bot laner controls the treants, gets a gold and xp advantage, hits an item spike before his opposing top laner, gets a red buff and win his lane. Happens 9times out of 10, pretty lame and boring for the jungle to just camp bot and pretty frustrating for the top laner to play with a handicap.