5v5 Matchmaker at its finest

Just another example as to how bad the matchmaker still is. Me and Emmanoelle were in a party and she hasnt ranked in 5v5 yet but the other three people were all accounts that had less than 10 games. 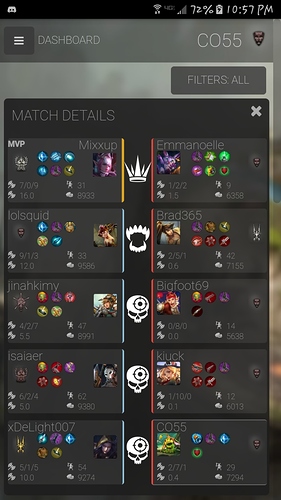 Seems pretty balanced to me.

Differences between tiers below 7 are minimal at best.
From 7 onward you start to see some difference…

You are complaining about casual matchmaker??? Dude… It is casual for a reason…

@Brad365 your Ringo build is very bad. You are better of following recommended builds. You are making yourself lose fights by going TM first.

SB Spellsword or tension bow are good first purchases. You get TM and no attackspeed. Any competent laner will murder you like that.

Never ever start with tornado trigger or tyrants monacle… It leaves you without damage. Crit after tension bow or a decent damage item would work though…

Seems pretty balanced to me.

What do you mean “whats the issue”? You have a T4, 2 T5s a T6, and an unranked, while on my team, literally all three of the others on my team are nearly brand new accounts. Im not saying they are smurfing because they weren’t. They played like brand new players not knowing how to build. Like WP ozo? its not often that works, let alone in 5v5. and he was going midlane. He and Petal both insta locked so we had no idea who was jungling because they both wanted mid.

And fyi, i know how to build ringo. I was testing a new build. i dont do numbers. i just build. see what happens in the long run. normally when i try new builds i just build as i go. Finding ways to counter the enemy team. I almost never use tension bow on him even tho i should. Its the lower tiers. i know how to play MOBAs. i played LOL for 2 years or so. I just dont rank because the players are so toxic nowadays in soloq that its hard to even have a team by the end of the game.

Lol everyone is having issues with Vaingreedy’s matchmaker lately.

having unranked on your team is a huge difference. they give up easily. they spam surrender. they camp at base.
it is also too easy to meet newbies who are T4, which might as well be put under unranked, they are that bad.

I had one yesterday run out to die every 3 minutes, so it didn’t register as afk. No afk forgiveness.

This is a casual match, not really sure why your complaining you’ve lost nothing as a result of the match.

This is a casual match, not really sure why your complaining you’ve lost nothing as a result of the match.

It may be a causal but it another example as to how bad the matchmaker still is. i was honestly hoping to see it fixed this patch but apparently Malene was more important.

How would that make a difference? If they are experienced enough the build thier build and counter build to a point, theres really no difference between ranked and cas. Really the only difference (in a sense) is skill. theres always been the issue where noobs think that since they beat the “Very Hard” bots, they can take on practically anyone. You have to know what youre doing in ranked or your teammates may report you if you feed half the game because you can’t play… You can do f*ck all in casusal, granted your teammates wont be happy. Where as in ranked you lose/gain elo. Thats pretty much the only difference. (unless im missing something, if so, someone correct me.)

You obviously didn’t understand my post. Some people don’t bother with rank even with the no how and skills to do so because they prefer not to get trolled for doing one thing wrong

Yeah I get what your saying, MM needs fixing, but do you really think they need concern themselves with balancing casual? Far more important to balance ranked matches, at the moment in higher tiers tour getting some ridiculous match ups.

Yeah I’m going to disagree, the regular players who’ve played for years are disillusioned with match maker, no business can afford to lose its core player base… these are the guys spending money week in week out, your newbie casual player isnt guaranteed to make any financial investment into a game.

I don’t think the matchmaker was this bad in 3.0 tbh. I die a little inside every time I find myself matched with people who don’t have the 5v5 founder badge…

Problem with what you are saying the core players have very little to spend money on. While casual players have it all

I’m going to agree to disagree with you on this… if casual were balanced and ranked wasn’t the competive side of this game would be a waste be a complete and utter waste of time.

Speaking for myself I play causal to experiment, who I’m playing against and their skill tier doesn’t bother me, not does the end result of the match as I neither gain nor lose anything.

Yes to you who have played how long? Have ranked to go to. While new players have none of that

Can’t find any other decent games though. That’s the only thing keeping me from leaving permanently…

in the past, casual and rank had different mmr, maybe that’s still the case?