Seriously SEMC you need to release rank. At the moment you can either hard carry the entire game or get snowballed. Neither option is much fun. I’ve not seen a single player with POA rank or above yet.

I’d rather play your broken 3v3 than have to suffer tiers 1-6 team mates/opposition.

Let those people know basic stuff in 5v5 first might be great. Sometimes match-making isn’t fair. But if they know all the basics it is better than they don’t know how to play at all

I also has a lot of below average team mates and opponent but the match making might improve next update. Waiting is maybe the solution.

It’s not the concept it’s just the team mates and opposition. Little fun in playing vs / with scrubs who don’t understand 3v3 yet alone 5v5. Every game Is a massive snowball usually dictated by whomever had the better jungler.

The matchmaker is non existent (no one can convince me for the opposite, if one can - prove it) and games are totally random. I have 1 from 10-12 games that turns out somewhat balanced, without afks and surrender @ 12 min mark.

I rarely get afk’s, but I get a balanced game here or there mainly from one enemy being insanely hard to deal with and my teams have pulled off some pretty sick come backs, but I do agree the overall skill gap in casual 5v5 during matches is way too big right now. I really can’t wait for ranked to come out

I’d put money down on a VG level player hard carrying the entire game if they’re jungling. Part of low skill tier play is draft, and your understanding of meta and counter drafting / building.

You miss my point, every game is a snowball right now. Over the weekend I ran a jungle Taka and secured over 23 kills, I got a penta at one point which basically won the game and secured over 50% of our kills. I’m not even competent with Taka, I’m not VG level but the skill level of my opposition was such that I carried the entire match, BOTS put up more resistance.

If your playing anything from tier 8 up then I believe you’ll find 5v5 a little frustrating, being snowballed isn’t fun, and snowballing low skill players isn’t a challenge.

It’s dull compared to the fast-paced 3v3, but compared to LoL and Dota, I find it more exciting, especially during team fights. The pace is faster and more tense and the tap controls mean faster skill shots and reactions, leading to more things you need to watch for.

It’s not the format, it’s the quality of team mates / opposition. Honestly BOTs are better than some of the people I’m playing with.

Sorry. The way the title said “it is dull” makes it seem like you are talking about play style. I can’t imagine having bad teammates as dull (boring) as it is infuriating. I agree that the matchmaking is horrible though.

Yeah title is misleading… I think the game itself will be great, it’s just dull playing vs scrubs with no understanding of the game.

At this stage lock in jungle Koshka/Taka and you can carry the entire game, +20 kills is standard.

I think we need to be a little more patient before throwing stones at SEMC. We all knew this was going to be a work in progress.

5v5, for me, has only been an enjoyable experience thus far…meaning when ranked drops it will only get better. I’ve also seen a slight change in the way I usually play. Usually I’m a bit defensive in my 3v3 play but now I’m more aggressive. Not sure if this attributes to 5v5 but my W/L percentage has increased drastically for the better since 5v5 dropped.

I’ve played since release (golden ticket); at the moment I find I’d rather play 3v3 than a casual 5v5 vs scrubs; you don’t learn anything useful.

Ps - you should always be pushing your power spikes, win condition. So if you’re a Koshka or a Krul you want to be beating down that opposition jungle. Aggression really is key…

I’ve been using VGPRO.gg to see how matchmaker has been doing it’s job… it’s been pretty good thus far…

Each time We’re the team with the nooby no rank begginer and still manage to win…
Feels good to beat high tiers ( not much higher, but overall, higher rank )

Haven’t played since the hotfix, I’ll try looking at this tonight.

But previously matchmaker was all over the place I’d be lucky to see a tier 7 on my team.

won against the VG silvers tho hue hue

Out of interest how many 5v5 you played and what’s your winrate? I’ve only played 9 matches, found them dull so I’ve tended to avoid playing.

Perhaps ive not built up the MMR in 5v5 to warrant decent matches.

I don’t think I’ve played any after the hotfix, most of my games were in early access when the matchmaker was really really broken (t4s and t10s same team lmao)… 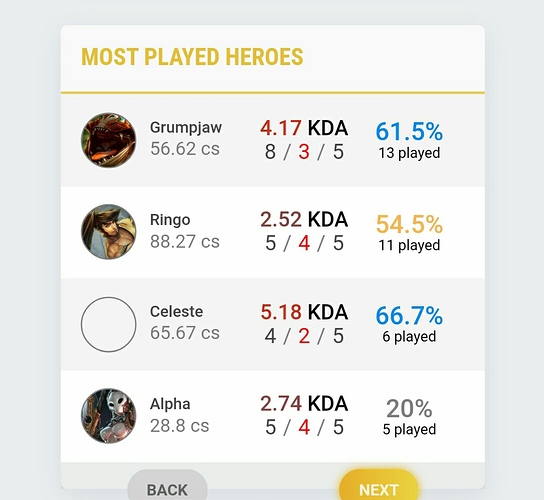 Screenshot_20180219-232829-1.jpg1080×991 107 KB
So idk how accurate this exactly is right now, because it left out some matches I played since it says I have a 0% win rate as Gwen lmao.
Also Iam pretty sure they didn’t take rank 3v3 into consideration and just randomly matched up people , atleast during early access.
After the hotfix, things have hopefully been better, I’ll maybe try playing tonight…
@Glowarm
Glowarm February 19, 2018, 6:00pm #19

Okay thanks, just thought I’d could be my own fault, not putting in the time might have left me with a low level MMR.

Apparently they haven’t factored in rank in 3 v 3 into match making (anecdotal, this could be wrong).