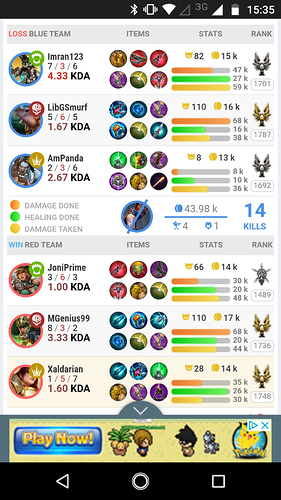 We won this match. We barely won. We had an ally who stayed positive even though he/she was way out of her league and it showed in her plays.

I am not salty. I am not bashing this player.

I am bashing the matchmaker here. This player did not belong in this match. Last season rank was very low and current rank 250 points below the other 5 people.

This is creating boosted players who aren’t learning but get carried beyond their understanding.

They changed the algorithm and it is ruining match quality.

The 5v5 matchmaker is currently broken, but I haven’t run across issues in 3v3 (which I’ve been playing a lot of lately, because 5v5 is just a

show). Tbqh, that match doesn’t look bad at all. I took a look at that match with Andi and with Vainsocial … 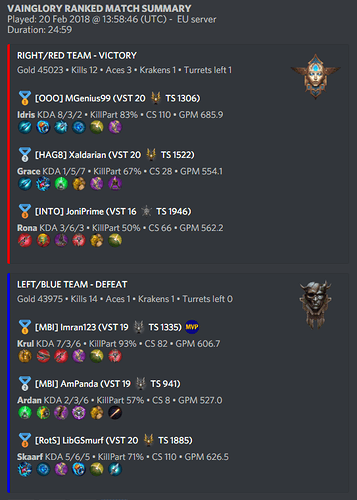 That player’s TrueSkill score is actually the highest in the match. (TrueSkill is probably much closer to the Top Secret MMR, fwiw, and it’s harder to boost than VST.)

Vainsocial rates the matchmaking quality at 95% …

I didn’t think the 3v3 algorithm has been tweaked (but I could be wrong)?

Looking at the API data, it looks like you ran into a player coming back from a long break, who doesn’t play ranked much anyway (last handful of games was 2 months ago, and then again 5 months ago). It’s tough to tell where their MMR is, but I’d guess it’s pretty close to yours.

I’m not sure how to fix this situation so it feels better for you though… maybe a small placement match series for prodigal players?

edit to add: lol @hazeleyes you were faster (and more useful) than me this time!

edit to add: lol @hazeleyes you were faster (and more useful) than me this time!

For a change! Lol!

Got some bad matches myself; this was the worst: 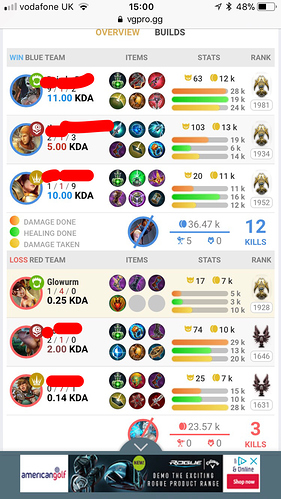 Bronze hotness duoq who failed to roam and choose Rona into grace; I’ll admit I got salty and gave up after he fed 4 deaths in 6 minutes.

Trueskill is a bad joke to be honest… That player had no idea how to engage. No idea what items do etc etc etc…

So true skill means very little to me…

That match shows you being toxic bro… Those guys might have been unskilled as can be but never give up. Never surrender to the salt and toxicity. That shit keeps you down.

The skaarf wasn’t all that bad when I look at him. rona into grace might not be great but you could have picked fountain over aegis and let rona pick up atlas.
Divide vision between you two. Kill Grace her healing with mortal wounds. It could have worked.

The match I showed above had me suiciding to keep Idris alive who then triple killed the enemy team while they tried to push our last turret because we had send in a kraken.

I know, I was toxic, he refused to roam, choose a terrible hero into grace then fed for 6 minutes with 4 early deaths, it wasn’t going to get any better.

Koshka relies on early game dominance and by 6 minutes we were so far behind.

Realise it makes me look bad, but this is what happens when match maker gives you tier 7 bronze (no way theyre even this good) vs POA level players. It should be matching lower than hotness gold, but it did and the result was a snowball by 6 minutes.

Those who sell stuff and troll are the guys who cause the losses.

The game was lost when you gave up.

Grace hard counters Rona, he was 0-4-0 by 6 minutes and they were snowballing us… choosing two melee junglers into grace along with CP Vox who they didn’t ban despite me pinging it was horrible, Vox shredded and alpha finished.

Koshka relies on early dominance and sharing farm sucks, she can’t snowball which is what she should be doing. I choose the aegis because of Voxs horrible resonance bounces and due to graces stuns every time I engaged. Perhaps it Rona had done the same he wouldn’t have been stunned out of every ult.

Honestly the draft sucked (I usually dodge the match if this happens), but I choose to play because I felt they might be competent, but they weren’t.

Together your team lacked 600 elo versus the other team. That is madness…

But this shit happens when low tier players get drafted vs higher ranked individuals. This draft wouldn’t have happened if they been tier 8/9 they’d know better. But matchmaker set up a horrid game, and the results was we didn’t have a win condition vs there comp, they countered us hard.

I know it was clearly visible in game that they were low tier players, I know i was toxic, but I didn’t go into the game planning to troll. It just frustrates me that I’m stuck in a 20 minute match which we’re not capable of winning. 4 deaths in 6 minutes; feeding them gold and sharing my jungle meant I was
so far behind alpha.

I don’t disagree on the fact that their poor performance majorly contributed into a loss.

You tilting is the true loss. Not just game wise.
That’s my point. It took me a whole lot of effort to stop tilting. But now I’m here. I got smashed down from SA gold to hotness Bronze. I have allies like yours all the time…

But now I am hotness gold and climbing back up. my allies no longer tilt me. I can get pissed off but that feeling does not last.

I tilt easily, I’m competitive by nature so when team mates draft badly it frustrates me, when they then fed the enemy I just wanted to get the game over with as soon as possible. By 6 minutes alpha had a SB and wasn’t fair of his shiv, I hadn’t even completed my AS because I’d been forced to share gold.

Wasn’t any way to win by 6 minutes, alpha was recking us, and voxs resonance bounces were brutal.

This is what happens when you get poor match making.

Also Vox and Alpha are on the OP side much like koshka and Grace. Enemy team had a broken comp and you got rekt hard.

Trueskill is a bad joke to be honest… That player had no idea how to engage. No idea what items do etc etc etc…

TrueSkill has been validated numerous times. Just because you don’t like it doesn’t make it statistically invalid.

No rating system is perfect, because there are many factors to consider, only some of which are practical to measure and include in an algorithm. In this case, as @HipsterSkaarf pointed out, you were matched with a player who was probably very rusty, having not played much recently. You could take recency of experience into account in evaluating a player’s skill, but most “Elo” type systems don’t do that directly. I did that with Andi’s “hero mastery” feature, using a decaying average function: 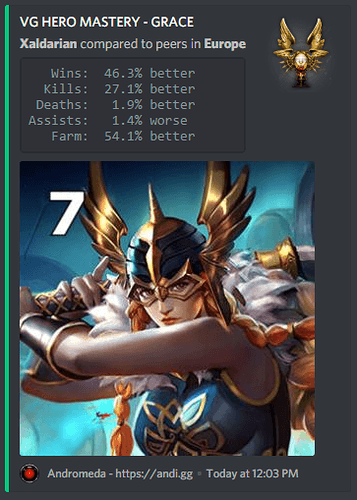 I checked your teammate’s mastery rating for Rona, but that person hasn’t played enough matches as Rona to calculate a result. (And that, of course, is something the MMR/Elo/TrueSkill/VST rating doesn’t account for – a player’s skill with a particular hero.)

Nice stats. Grace is one of my better heroes

How can I use that app/site?..

I’m not one to back SEMC of recent but I see nothing wrong with the matchmaking here. (OP)

With queues split even further and a lower pool of players to match, a total elo difference of just over 200 is completely fine IMO. Even before the split, post 5 v 5 I would say the matchmaker hasn’t got much wrong here.

Expecting everyone to be within a sub tier of each other is nice for sure but its just not realistic.