Post them here! I am at work and have only had time to download the new update, load the game, and browse the new home UI screen. I LOVE it. I really think this is their best UI/home screen yet and my knee-jerck over reaction is that they don’t need to ever change it again. Really easy to find what I’m looking for and a very sleak look to it.

Ranking system: I am pleasantly surprised. When they said a deeper drop, I was worried. I only dropped to 8 silver and 8 bronze in 5v5 and 3v3 respectively. I’ll take that. One concern: I’ve already seen a post claiming someone got to VG gold in the first win? I hope that obviously settles down and sorts itself out. That’d be a serious bug in the release of the update, as that player automatically earns a VG gold patch for their next season when they’re re-seeded.

Any ways, I love the new look and I’m looking forward to earning rewawrds in the new Battle Pass and getting my ELO back up. Hit me up in-game at VeritasVT!

Update hasn’t came available for me yet on Google play

ok first impression. good ui changes, like them. guild could still be improved. magnus is op thats it. his A ability hitbox is kinda wierd. the hit box is really weird. I dunno. Maybe im not used to pc yet, but i was playing idris just fine. lets see, maybe others might have same issue as well or it might just be me.

Update: Still loving the UI. Gameplay UI seems smoother too. Not sure why.

I like how Battle Pass gives you the frosty friends ping pack if you reach level 100. Rather than unlocking a pre-existing pack (last season did Minion). However, I will say this about the Batte Pass (can any other Batthle Pass holders chime in!?) - I feel sunlight XP is MUCH SLOWER or takes a lot more to gain a level. Last season, I gained level 2 within a few matches. I won a blitz, lost a 5v5, then won a 5v5 (150 sunlight) and I’ve barely gotten a quarter of the way to level 2. I’ll keep my eye on that.

I love the 3v3 winter map. Why don’t they do seasonal maps for 5v5?

Social: I find the “recent” section to be a bit tedious and annoying. For those who haven’t played yet, above friends, guild, and conversation in your social tab, there is now a “recent” section. It shows the last/most recept players you just played on a team with (I think just your team). It gives you the option to simply remove them from that section or to request them as friends. I just find it a bit cluttering and tedious, as I’m just removing them every time. I guess you could just ignore it and never expand it. I feel if I bump into a player I really want to play with, I request them immediately at the end of the game summary screen. With applications like Vainaura and VGPRO as well, it’s possible to find their name (although, to counter my own point, if that was the case and you forgot to friend request, this feature is certainly nice).

I’ve yet to see Magnus in action. He was banned in my second 5v5 and not chosen in the first.

Hero Mastery: I was nervous you’d get credit even for playing bots. Relieved to say that is not the case. Only in PvP. Still, would be cool if they made it skill/win based, not just participatory.

I’m happy so far with the new season! Good luck out there, everyone.

and the speedy decision to activate his mark or not is a lot of fun. (I have only used him in practice with my brother though my gold key gave me nightblade inara instead of Magnus >:v)

Batte Pass (can any other Batthle Pass holders chime in!?) - I feel sunlight XP is MUCH SLOWER or takes a lot more to gain a level

Till now I always reached max level, last season I end up on 81 and mind you - I played quite a lot this season.

Yeah comebacks are impossible it feels like with the new gold bounties enemies easily get 10k gold ahead. Also the jungle is completely useless characters with strong lane harassment are gonna be OP, so Silvernail and Lorelai are about to stay top tier.

Hey Saint. Not sure if this is different or not from the previous season. But in a game today when I killed a 5/0 Vox, I got a 1,000 gold bonus. That was huge. It really sped up getting crucible and then war treads and definitely helped us in team fights immediately.

Had 2 ranked matches.
I got +3 and +5 elo respectively.
Churn and Lorelai were banned so I’m sad.
Still confused about the buffing of the already top-tier captains. Yeets does even beefier damage because… why not

I like the overall UI feel in the homescreen.
I like how they removed the green glowing talent indicator on the heroes tab.

I dislike the Blueprints tab. Those white borders are not pretty.
I heavily dislike the Bag organization. Its contents feel so cramped in a tiny space. The column of tabs with a golden glow take up too much space than they should. Additionally, because there is so much content in that bag, there has got to be some sort of additional visual marks instead of bold text.

I’m confused with the hero loading screen. The bigger size look good on phones, but those white borders are distracting. Too much flashy things going on. I think a good head start is to remove the 5v5 badge in ranked- it’s just unnecessary at this point.

I know I sound like I’m nitpicking the update or something, but overall I like it as a first impression.

Also Kensei late game is strong enough to teamfight again I can one trick him huzzah. 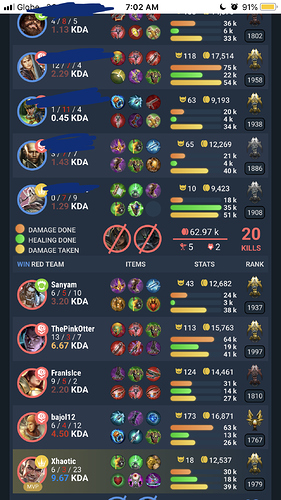 Go get that PENTA

Differences skins give different amounts of sunlight. Not sure what amount though I think legendary>epic>rare.

Skins no longer give sunlight bonus

Also NONE of the skins that were supposed to be available for opals is available… all of them stays ICE/blueprint only. Great… also I find a lockouts of skins, for example I could have unlocked for ICE yates rare for 2 months and now I can’t, only blueprint way is available to me - WHY?

I just think a lot of people will stop buying skins since it doesn’t matter anymore if you go with a limited edition or a rare. It’s the same.
Ppl will lose interest and incentive for getting skins and then smec will wonder why only to introduce another half baked monetization system…

We had the problem of stacking lots of essemce with no blueprints to spend it on… Guess it is solved now, cause we can now sleep on skins, hooray!

I have around 120 000 essence. Since 5vs5 release I didn’t get a single blueprint that is not for already owned skin. This is with me playing on average 2h every single day and having around 90% of the skins (still, quite a few I don’t own at the end). This is the beauty of RNG, you have super low chance for a blueprint drop, then even times slimmer one to be epic, then few more times to be legendary/SE and to top it out - I have only around 10% chance to get not owned blueprint… so yeah, mathematically it’s totally normal to not have a single blueprint after a year of every day 2h of gaming that game.

I literally feel like after spending around 700$ (actually and sadly, I am pretty sure it’s more) on that game, I am “rewarded” with money RNG walls and they won’t let me unlock even a F rare after so much time invested in that game and stated (play/unlock) by them that is obviously only towards a new players.

I actually thing people Will buy more skins as you can now use the skin you want, which means the value of Epic and Rare skins increases. As long as they make good skins people Will buy It. Sadly, without the bonus sunlight, LE skins have Lost a lot of value, no reason to use them.