10 Reasons you should one trick ‘The Family Sitcom’

If you’re anything like me, you’ve been playing so much 5v5 that your fingers feel like falling off, but you have absolutely no idea what’s going on in 3v3. 3v3 seemingly has no meta, with an ‘anything goes’ rule as long as it can snowball the opposing team somehow. However, what I will be teaching you today is a comp that’s not about snowballing and early kills, but is instead about FRIENDSHIP and FAMILY BONDS.
It’s pretty obvious why this comp is so good, but I’ll give you 10 reasons anyway. Or else I would be clickbait.

So, what even is the Family Sitcom comp? It’s pretty simple.
Lane Adagio.
Jungle Kensei.
Captain Phinn.
Now, this may seem like a standard Adagio buff comp, but the synergy between all these heroes is perfect. Adagio and Kensei is self explanatory. Infinite energy and easy fire spread for Adagio, tons of healing for Kensei. Phinn protects Kensei’s vulnerable early game and they work fantastic when it comes to stacking BP. Phinn and Adagio can hold out lane for incredibly long amounts of time, and their ult combo is excellent. Now, there’s one problem to this.
You have to get to late game to make Kensei useful.
Imagine it like this. Adagio, Phinn and Kensei are a loving family (The other two vaguely asian male melee assassins aren’t acknowledged, of course). Kensei moves away from home to find a job to get money, and kicks off the Sitcom where the parents try to desperately keep everything together. Eventually, Kensei comes back to finish the series and to make everything right again, winning the game in brilliant fashion.
Or the show crashes and burns before it can get rolling. That’s a possibility too.
To achieve the godly late game of Kensei, you’re going to have to make some comprimises. Adagio and Phinn are the compromise. They can 2v3 the opponents lane push and keep the game going as long as possible. Even if they get behind, Adagio can buy Captain items like Shiver or Capacitors to stay relevant in the game, compromising his own damage for his family, like a good parent. It’s not the best comp, but it feels insanely good to make it succeed, since the late game between all of them is unbeatable.

I would destroy that with any ea ly game comp. Snowball Kensei and you win. Late game kensei would have to dive, meaning phin wont be able to help and adagio will suffer.

nah dude i can confirm it works as long as your adagio isn’t bad.
(phinn btw)

If the enemy doesnt know how to snowball of course It works, as any other late game comp.

Late game kensei would have to dive, meaning phin wont be able to help and adagio will suffer.

Not really.
Capacitors on Phinn gives him way more mobility than he really should, and a common buy for me and my buddies on the Adagio was Shiversteel.
Also this series isn’t meant to be a serious ranked series, it’s more of a ‘Try this’ type thing. Just so you know.

You said its easy to get It through draft, which is a lie, its almost impossible for kensei to not be banned.

dont worry next patch it will

Super risky comp , slow heroes suffer in the 3v3 meta , like celeste and cp baron can destroy your comp easily , i would counter your comp with krul lyra celeste , they can snowball and win easy .

Good luck getting kensei, he’s usually banned along with kinetic… late game I could see this working, then again I don’t think it’ll get to late game as ppl tend to snowball kensei now. 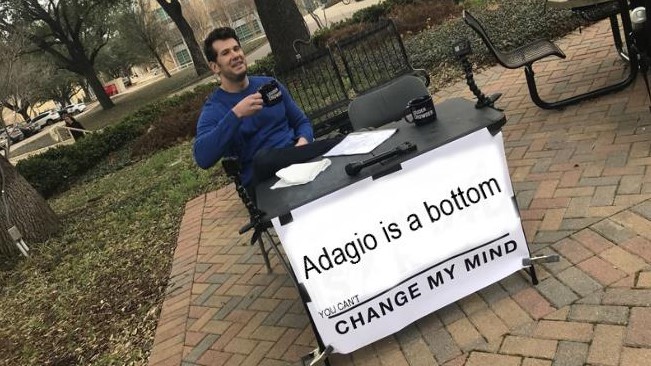